Earn money by pimping out his daughter.

Henry Walker is the main protagonist of the infamous Chick Tract "Lisa". This certain tract cannot be seen on Jack Chick's website, and there is a good reason for that.

Henry and his family were running short on money. Because of this, Henry came up with the awful idea to pimp out his daughter to rake in the money. While this is bad in and of itself, it also turns out he had raped his own daughter, who is in elementary school by the way, and then shared her with his neighbor Charlie so that his shame wouldn't be exposed. Because of Lisa's sexual abuse, she develops herpes simplex.

Henry then broke down and told everything to the doctor saying that his marriage was falling a part after he lost his job, and that he later picked up on drinking and pornography, and that his wife didn't respect him anymore. And, surprising absolutely no one, Henry repents of his sins, and gets away scot-free with raping his own daughter and pimping her out to the neighbors. Henry's wife Linda was also aware of the abuse, but she did nothing to help her daughter, nor make the situation any better. Not even the doctor called the police to arrest Henry for pedophilia.

Apparently saying you're sorry in this universe can get you away scot-free with anything like committing rape and exploitation.

This is believed by many to be the worst Chick Tract. Although many of the Chick Tracts are viewed of as a "so bad it's good" quality, this tract, in particular, was incredibly uncomfortable for viewers to read because of the issue with the father raping a child and prostituting her for cash and then simply saying he's sorry without any repercussions somehow makes everything all fine and good.

This is the tract that convinced many people that any crime, such as sexual abuse, isn't a serious issue in this universe, and that they also believed that Jack Chick himself crossed the line by scripting this tract.

Because of this, this tract can no longer be read on Jack Chick's website, most likely for the criticisms listed above.

Fortunately, Jack Chick appeared to learn his lesson from this, as in future Chick tracts (i.e. 'Home Alone,' 'The Little Bride,' 'Kidnapped,' and 'It's Not Your Fault'), the sexual abuse of children was portrayed as a much more serious issue. 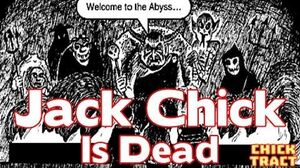 Jack Chick is Dead The Worst Tract EVER