Gaining more and more wealth.
Gloating about himself.

Create the Indominus rex to be a new attraction of the park.
Improve and force the I. rex into evolving in order to gain vast financial profits.
Avoid getting arrested and/or killed by the Dinosaurs (all succeeded).
Use the Indominus rex as a military weapon for the US Army (failed).

He is the chief geneticist of InGen who is responsible for creating the dinosaurs for the amusement parks Jurassic Park and Jurassic World, which also includes the Indominus rex and other genetic hybrids. Following the death of John Hammond, Wu undergoes various illegal activities involving selling dinosaurs to military assets, working with criminals such as Vic Hoskins and Eli Mills to achieve this.

He is portrayed by BD Wong, who also played Hugo Strange in Gotham, Whiterose in Mr. Robot and voiced Godspeed on The Flash, and Toad Liu Hai in DuckTales. In Jurassic World: Camp Cretaceous, he is voiced by Greg Chun, who also voiced Muzan Kibutsuji in Demon Slayer: Kimetsu no Yaiba, Gabriel Miller in Sword Art Online: Alicization, Garou in One Punch Man, and N'Doul in Jojo's Bizarre Adventure: Stardust Crusaders.

Henry Wu is a Chinese American from Ohio with a Ph.D. in genetics. He is a senior member of InGen's project to recreate the dinosaurs via cloning. When the team had discovered large amounts of dinosaur DNA, Dr. Wu proposed that they could start to clone dinosaurs by filling in the missing parts of the dinosaur genome (DNA) with DNA from extant species, which the investors preferred this approach because it was faster, easier and cheaper. Thus, the board gave Dr. Wu a promotion to be the chief geneticist.

In this approach, Wu decided to use the DNA of several species of amphibians, including the Common reed frog (Hyperolius viridiflavus), to supplement the dinosaur DNA. The first prehistoric animal was cloned in 1984. Aware of the potential dangers of the cloned dinosaurs, Wu also decided to build in a few safety measures, which later revealed only worked properly. His created dinosaur clones have their chromosomes designed such that all animals were female, so they could not reproduce. He also made the dinosaurs unable to produce Lysine, so they would die without the supplements in their food.

When the endorsement team visited the Isla Nublar Laboratory to see the Velociraptors hatch, Dr. Wu was among the scientists in the laboratory at that time. He joined the group and answered their questions. Wu probably left the island on the C-3208 boat during the storm evacuation.

Wu returned to the island in November 1994 as part of the operation to deconstruct the ruined Jurassic Park. His job was cataloging specimen numbers, and to identify exactly how the animals were breeding. Wu discovered that the amphibian DNA enabled the animals to change their sex through a chemical trigger that disintegrated the female organs to create male sex organs.

Wu kept leading the research team at a financially struggling InGen. The breeding dinosaurs had shown him that not only the DNA of various species could be combined, but also their observable characteristics. In 1995, Dr. Wu wrote the book The Next Step: An Evolution of God’s Concepts. In this book, he proposed the hypothesis that he could bring brand new species into fruition by the combination of the traits of various species.

In 1997, Wu and his team actually succeeded in creating a hybrid organism. They had combined the DNA of several plant species to create a new plant, Karacosis wutansis (or Wu Flower). The creation of this hybrid plant gained worldwide media attention.

In 1998, the Masrani Global Corporation took over InGen. The CEO Simon Masrani promoted Dr. Wu within the ranks of the InGen company in December 2000. Wu supervised the creation of new dinosaurs in the Hammond Creation Lab for the new park Jurassic World which opened in 2005.

At an unknown time, Eli Mills hired Wu to create the first hybrid dinosaur, the Scorpios rex, for his illegal operations. After many attempts through his E750 project it worked, but Mills objected to using the Scorpios because it was too unstable for him, and when Wu introduced the creature to Masrani, the latter objected because he didn't want the guests involved. Upon discovering its unpredictable behavior, Wu was attacked by the Scorpios but survived, and didn't listen to Masrani's orders to kill it for being so unstable, so he had his scientists place it in one of his cryogenic chambers to discover the cause of its behavior, saying he wanted to relocate it somewhere where it wouldn't be a threat. Dr. Wu also got hired by Vic Hoskins to create dinosaurs for his security force, and he and many other InGen scientists were involved in the creation of the Indominus rex, his second hybrid dinosaur.

In November 2014, the new InGen facility named "Martel" opened in Siberia. The goal of Martel was to extract Pleistocene dated organic materials from glacial ice. He showed excitement for the project believe it will expand InGen's genome library, but he withheld from speculating about using any found materials to create Cenozoic animals for Jurassic World at the moment. In a paper for a scientific journal that was published by Wu in March 2015, he reported on the possibility of using InGen's genome library to help Medical Health in their research of diseases.

Dr. Wu first appeared explaining to investors that the Indominus rex wasn't bred but was designed and that she was already to be open as an attraction. After the Indominus rex escaped, Masrani confronted Wu about how the animal was created. Wu did not tell Masrani that part of it is Velociraptor, but he did mention that it had the genes of cuttlefish to help her withstand an accelerated growth rate, which results in her possessing the ability to camouflage. Treefrog DNA was also used to adapt the hybrid to the island's tropical climate, but it also gave her the ability to hide her infrared signature from the thermal seeking cameras around her paddock.

He also reminded Masrani that he was the one that asked for a bigger, scarier, and cooler dinosaur, not thinking of the fact that genetically altering dinosaurs would naturally cause them to become less predictable and more dangerous; but Masrani accused him of creating a monster instead. Wu then states that "monster" is a relative term between a cat and a canary; they are used to being the cat. Though he seems to be somewhat unpleasantly (or possibly pleasantly) surprised at how deadly the hybrid has turned out, he does not appear to be remorseful about the deaths that it has caused, deeming them merely "unfortunate", and is unconcerned that he has committed numerous crimes against nature by creating the hybrid in the first place, believing that it was in the name of furthering the science of genetic engineering.

While everyone evacuated, Vic Hoskins, whom Wu was secretly working for behind Masrani's back, had him evacuated with a case of embryos while he and his team take the rest, possibly to create more hybrid dinosaurs for battle combat where some of the said hybrids are seen on his computer near Hoskins when confronted by Owen, Claire and her nephews before being mauled by Delta.

Wu is first seen in Episode 2 when the teenagers of Camp Cretaceous (except Darius and Kenji, who were punished for sneaking into the Raptor Paddock late at night) arrive in his lab. Brooklynn goes into his office to discover a secret for her blog. She has just the time to read the name of a new dinosaur created by Wu, being the Indominus rex. However, she is caught by Wu, who sends the group out of his lab. He is not seen again in the series, but in Episode 5, Roxy and Dave (the co-counselors of Camp Cretaceous), overheard someone scream save Wu through a walkie talkie, and his employee Eddie told the campers that Wu got greedy and built hybrid dinosaurs.

Wu doesn't appear in the second season of Jurassic World: Camp Cretaceous, but when Brooklyn, Sammy, and Yasmina go into Wu's lab, Brooklyn says Wu was up to something big and secret, and Brooklyn ends up finding Wu's key card. Brooklyn later uses Wu's tag to get inside a garage (unintentionally) and the surveillance room.

Brooklynn and Sammy watch a video on Dr. Wu's computer in which he talks about the Scorpios rex created in the E750 project quickly changing from placid to extremely aggressive, and then being attacked by the dinosaur, after which he states that he put the Scorpios in a cryogenic chamber so he can find out what is wrong with it. Later on, after the death of the two Scorpios rexes, Wu returns to Isla Nublar with a team of Mills' mercenaries to retrieve his private laptop to create more hybrids, but Brooklynn and her friends stop him and destroy his laptop, thus stopping the creation of hybrids. Despite the mercenary pilot attempting to kill them again, since the mercenaries already got the Indominus ribcage, Wu convinces the pilot to let go of his grudge because it wouldn't be worth it and because he can use the ribcage to breed his last hybrid, the Indoraptor.

He is first seen working with Eli Mills inside Lockwood's mansion to where he argues with Mills and is upset Blue had been shot and wanted her alive for the Indoraptor. Dr. Wu clearly loathes and even despises Mills, regarding him as nothing more than a spoiled, incompetent, and weak-willed parasite that is beneath him. Later, he is seen at the auctions, attempting to prevent the wild, unpredictable Indoraptor from being sold to someone; however, chaos ensues thanks to Owen Grady's intervention.

While the Indoraptor kills people, Wu eventually tried to take DNA from Blue but was told by Zia that she saved Blue's life by a transfusion of T. rex blood much to Wu's shock. Wu gets angry because now Blue's DNA is no longer pure. Wu was then tranquilized by Franklin and dragged off by a mercenary with a mustache.

He is set to return in Jurassic World Dominion.

Dr. Henry Wu is shown to be a very devout scientist. Being an extremely intelligent scientist, surpassing most others on the planet, he was able to use the DNA of dinosaurs and combine it with the DNA of other animals. When he's first seen, he shows deep fascination and pride with the dinosaurs he's genetically engineered. He's also shown to be very doubtful in Dr. Malcolm's warnings, and scoffs that his idea that "life finds a way".

Upon being seen again in Jurassic World, his personality remains the same for the most part, and takes great pride in his creations, specifically the Indominus rex, since it's the first official genetic hybrid with the DNA of multiple dinosaurs and other animals. However, his sentimentality of human life appears to have significantly dulled, as he only viewed the deaths of people caused by the Indominus rex as "unfortunate". He also harbors a great pride in his creations, as he states his Velociraptor as "perfectly designed" in Jurassic World: Fallen Kingdom. Wu's villainous progression can best be rooted in that while Hammond had the dream for Jurassic Park, It was Wu's genius that made the park a reality. 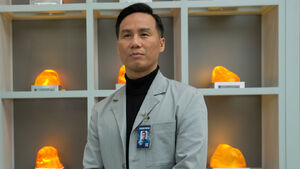 Dr. Wu stands in front of a collection of amber samples collected from various InGen operated mines located all across the world. 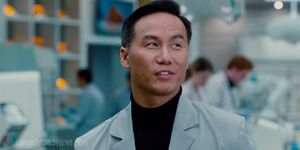 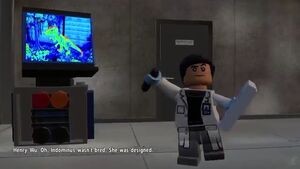 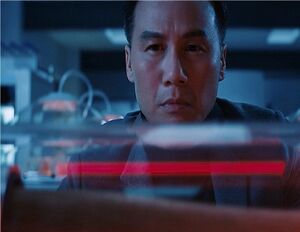 Mr. Henry Wu using a part of the Indominus rex's skeleton to make the Indoraptor. 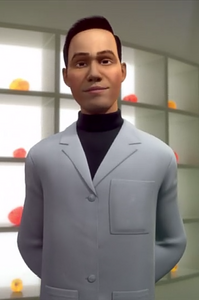 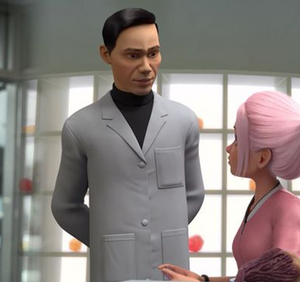 Dr. Wu being interviewed by Brooklynn. 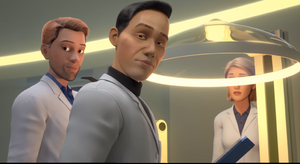 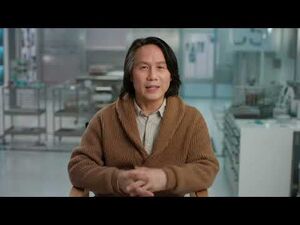