Greek god of Blacksmiths and Craftsmanship

Hephaestus, the Craftsman of Olympus, is a god of fire and craftsmanship, and a character in God of War III. He started out as an ally to Kratos, but at the very last encounter with him, he tries to kill Kratos, so he could protect his daughter Pandora.

Hephaestus (Hēphaistos) was a Greek god, whose Roman equivalent was Vulcanus. His mother was Hera, who gave birth to him either alone or with Zeus. He was the god of technology, blacksmiths, craftsmen, artisans, sculptors, metals, metallurgy, fire, and volcanoes. He served as the blacksmith of the gods, and he was worshiped in the manufacturing and industrial centers of Greece, particularly in Athens. The center of his cult was in Lemnos. Hephaestus' symbols are a smith's hammer, an anvil and a pair of tongs, although sometimes he is portrayed holding an axe. Hephaestus is the only Olympian god to have been exiled from Olympus and to have returned. In a Homeric version of Hephaestus' myth, Hera, mortified to have brought forth such grotesque offspring, promptly threw him from Mount Olympus. He fell nine days and nights and landed in the ocean. Hephaestus, being the most unfaltering of the gods, was given Aphrodite’s hand in marriage by Zeus in order to prevent conflict over her between the other gods.

After Kratos killed Hades, he returned to the Forge and met with Hephaestus who was amazed that Kratos destroyed their uncle. He soon told him the story of why he was in the state he had found him. Hephaestus was a skilled craftman and Zeus gave him premission to marry Aphrodite. But after Kratos killed Ares, Zeus became a monster. He also mentioned that he had a daughter named Pandora, and that she was taked by Zeus. Hephaestus tried and tried to recreate his daughter but failed. He requested to Kratos to find Pandora and bring her to him.

The third time Kratos encounters Hephaestus, Kratos seeked the labyrinth. Realizing that he was searching for Pandora, Hephaestus told him to stay away from his daughter. Hephaestus told of how Pandora's box was created. He mentioned that all the great evils of the world couldn't be contained easily, and that the great evils were contained within a force greater than any God; the Flame of Olympus. He realized that the Flame was the safest place for the Box to be. All was needed to open the box was a key. The Key took on life and became Pandora. When Zeus came for the box, Hephaestus hid Pandora from Zeus, as Hephaestus had grown to consider her as a daughter. He also mentioned that storing Pandora's Box on Cronos' back would be the safest place to hide the Box. When Kratos opened the box, Zeus tortured Hephaestus until he told Zeus about Pandora and that she was the key. He left Hephaestus in torment. Hephaestus knew that his daughter would be in danger, so Hephaestus tricked Kratos by offering to help to destroy Zeus. But in order for him to help Kratos, Hephaestus asked Kratos to retrieve the Omphalos Stone, from Cronos. If Kratos was successful, Hephaestus would make a powerful weapon for Kratos. However, when Kratos entered the door that led toward Tartarus, Hephaestus sealed the door shut, snickering out loud.

After Kratos killed Cronos and retrieved the Omphalos Stone, Kratos thought that Hephaestus sent him to his death. Hephaestus told he that he really did need the Stone to make the weapon. Kratos gives Hephaestus the Stone. Hephaestus created the Nemesis Whip but, before Kratos could try it, Hephaestus tries to electrocute Kratos to death. Failing to do so, Hephaestus tries to slam a piece of burning rock onto Kratos. That failed as well. Kratos then used the whips and stabbed Hephaestus' hand, electrocuting both him and a metal rod severely. Kratos then used the whips to electrocute the second metal rod. When both metal rods were fully charged, a carving anvil came from underneath the platform and slammed into Hephaestus' head. Before Hephaestus died, he begged to Kratos to spare Pandora. 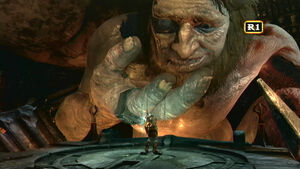 Hephaestus giving the Nemesis Whip to Kratos.[Hephaestus'_death.png|Hephaestus' death.
Add a photo to this gallery

Retrieved from "https://villains.fandom.com/wiki/Hephaestus?oldid=3796019"
Community content is available under CC-BY-SA unless otherwise noted.