Protect and Defend the Helghast People from enemies

Hera Visari is a character from Killzone Shadow Fall and is one of the antagonists from the game. She is the Chancellor of New Helghan and is the responsible for defending the remaining surviving Helghasts from anyone who threatens them. She's the daughter of Scolar Visari.

Hera Visari is seen in the introduction of Killzone 3 where she greats her father, Scolar Visari in front of members of the Helghan Senate during the Interplanetary Strategic Alliance invasion of Helghan and was sent to the nearby Planet of Gyre for her safety during Operation Archangel. She remained on the Planet for the remainder of the Second Extrasolar War until the destruction of Helghan in 2360.

In 2390 Hera Visari has become the Chancellor of the State of New Helghan and is the ruling leader of the remaining Helghast survivors. She is involved in a current conflict with the Black Hand, a Helghast terrorist organization led by Vladko Tyran. She is seen for a brief moment in a scnee where she is arguing with her daughter Maya Visari (codename Echo) over the use of a biological weapon and orders her daughter to be taken away by nearby guards. She then exchanges words to Lucas Kellen on how the Helghast and Human Races were once one Race but are now enemies and leaves the room never to be seen again. She is referenced many times by Echo that she understands her mother's dilemma and that she would fight to the last breath if New Helghan were to ever be invaded by Vekta.

Hera Visari is a very troubled individual who is forced to manage and maintain control over her country and try to keep the peace in the region. She takes a lot or burdon and responsibility and she is willing to defend New Helghan to the last breath. 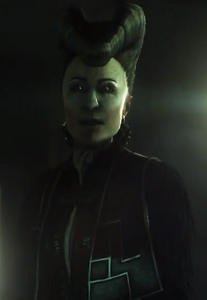 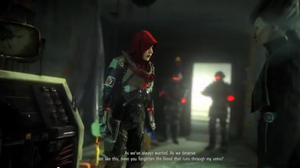 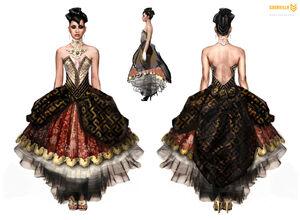 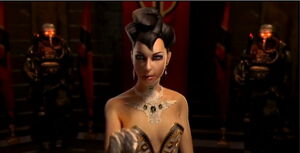 Retrieved from "https://villains.fandom.com/wiki/Hera_Visari?oldid=4203111"
Community content is available under CC-BY-SA unless otherwise noted.