Justin and the Knights of Valour

Kill the Queen and Reginald.

Take over the kingdom (both failed).

Heraclio is the main antagonist of the 2013 computer-animated English/Spanish film Justin and the Knights of Valour. He is Justin's archenemy and Sir Roland's enemy.

He was voiced by Mark Strong, who also played Lord Henry Blackwood in Sherlock Holmes, Frank D'Amico in Kick-Ass, Thaddeus Sivana in Shazam!, Sir Godfrey in Robin Hood, Pinbacker in Sunshine, Sinestro in Green Lantern, Jimbo's father in The Prodigies, Matai Shang in John Carter, and Prince Septimus in Stardust.

Heraclio was once one of the finest knights in the kingdom of Gabbalonia, but when the King died in battle and the heartbroken Queen outlawed knights hoping it would end the violence. Heraclio turned against the queen, declaring that she and Justin's father Reginald, the queen's chief advisor, were betraying them and that the new system of law officers were usurping the power of the queen. He tried to kill both Reginald and the queen, but Justin's grandfather, the great Sir Roland stood in his way. Roland defeated Heraclio easily but, remembering all they had been through as comrades, he hesitated instead of striking Heraclio down. As such, Heraclio managed to take Sir Roland's own sword and kill him with it. He then stole the sword and escaped. For more than a decade, Heraclio plotted to return to the kingdom and seize the crown for himself.

Returning several years later, he sent his followers to liberate criminals from prison to build his army. Bringing them to him, he brought them into his forces and promised them revenge against the laws that had imprisoned them and wealth beyond their wildest dreams if they followed him. He then began teaching them how to fight, turning them into a proper army he could use to invade. However, as he was running low on gold to keep their loyalty, he decided to follow his lieutenant Sota's plan to kidnap Lara, the daughter of a very rich family, thus holding her for a high ransom. Sota and his brothers fail, but Heraclio gets Lara when the dimwitted and greedy impostor of a knight Sir Clorex brings her to him, hoping to get a cut of the money. Heraclio plays along, but knowing Clorex is a fraud, he secretly orders his men to kill him. But they are distracted by Justin and Talia both arriving to save Lara.

After the two manage to defeat Sota and his brothers, Heraclio calls for Justin to join him, claiming he is in the right and is trying to bring back the knights. But Justin refuses, so Heraclio sets his Army on the pair. However, the army is scared off when Blucher (an old knight, who taught Justin, and was Sir Roland's best friend) arrives with Gustav (a crocodile mechanically fitted to simulate a dragon, designed to train young knights). Heraclio and Blucher duel, but Heraclio comes out on top and fatally wounds Blucher.

While Talia goes off to rescue Lara from Sir Clorex, Justin then takes Heraclio on himself, the two's fight carries back into Heraclio's tower. Heraclio manages to lead the fight, trying to kill Justin. However, Justin manages to gain the upper-hand forcing him back onto a platform leading to watermill over a waterfall. Dropping Sir Roland's sword, Justin takes it up, he then tosses Heraclio his own. The two continue to duel, but Justin manages to defeat Heraclio and holds him at sword point. Heraclio once again tries to convince Justin to join him, claiming they both want the same thing, but Justin refuses, stating he would die. Taking advantage of Justin's mercy, Heraclio throws dirt in his face and punches him back onto the mill turbine. Walking forward he tries to deliver the final blow to Justin, but Justin grabs him and pulls him down. Heraclio manages to steady himself, but when his crown falls of his head, he tries to grab it but loses his grip and falls apparently to his death into the water below. 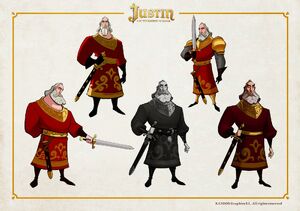 The concept art of Heraclio.

Justin and the Knights of Valour 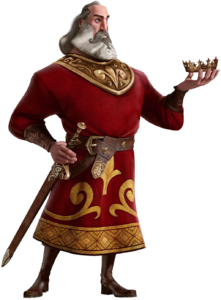 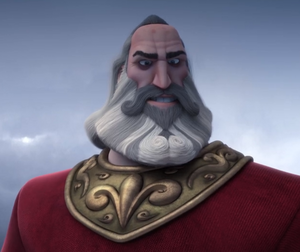 "Everything that's happened is ALL YOUR FATHER'S FAULT!"

"Your father ruined my life. And now I'll RUIN his. By KILLING YOU."

"How sweet. You clung to your grandfather's sword until the end. But now it has to return to me. And I will use it to kill your father."

Heraclio falling to his death.