Founder and owner of the Brand Corporation

Genocidal Scientist
Herbert Landon is a recurring antagonist in Spider-Man: The Animated Series. He was a brilliant but completely amoral scientist who specialized in mutant DNA. He later became an employee to Wilson Fisk replacing Alistair Smythe.

Herbert Landon was at some point a friend of Beast prior to his transformation into a mutant. Unlike Beast, Landon would continue to harbor a deep hatred of mutants his whole life, to the point he created a chemical substance specifically for the purpose of killing all mutants that he openly stated he would wipe out all mutants using his invention, which Beast rightfully warned was basically genocide.

When the Hobgoblin attempted to steal Landon's formula, a fight ensued in which Landon was doused in his own chemicals, turning him into a thirty feet mutant, needing to feed on electrical energy to survive to compensate for the energy that his own cells were no longer producing after being exposed to the mutant "cure", while lacking any mutant cells for it to destroy. Luckily, the X-Men and Spider-Man were able to reverse the procedure, but the accident left Landon permanently mutated down the right side of his body. After that, he joined forces with Spider-Man's arch-foe, the Kingpin, and served as his key scientist.

Following this, Landon was portrayed as half-human and half-reptilian (his mutant form), and Kingpin's sidekick. He used his knowledge of bio-engineering to transform Alistair Smythe into the Ultimate Spider-Slayer and became a replacement partner to the Kingpin, taking Alistair's spot. He also recreates the Captain America super-soldier formula in order to turn Felicia Hardy into the Black Cat. In The Awakening, he enlists the services of the Shocker to help him steal the Neogenic Recombinator and at the end of the episode, Landon is seen in the hospital right after Morbius drains his plasma. Landon makes a cameo appearance in the following episode, wherein he was hypnotized by Mirium into stealing the Neogenic Recombinator from Kingpin. He was later seen fully recovered in the fifth season premiere and last appeared in the five-part episode saga that followed the fifth season premiere. 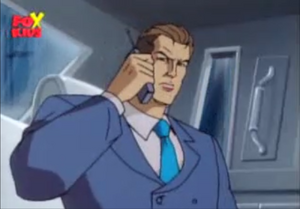 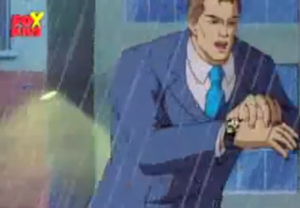 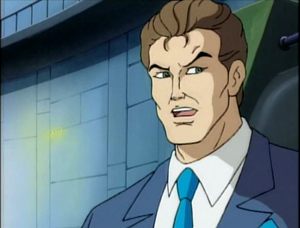 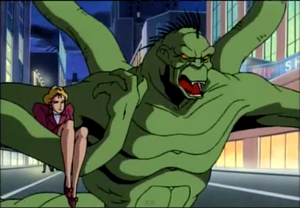 Retrieved from "https://villains.fandom.com/wiki/Herbert_Landon?oldid=4264248"
Community content is available under CC-BY-SA unless otherwise noted.