Villains Wiki
Register
Don't have an account?
Sign In
Advertisement
in: Articles under construction, Cleanup, Outdated Articles,
and 37 more
English

Allow the dead to be brought back to life.

Herbert West is the protagonist villain in the Re-Animator series of films and comics, based on an early story by the late H.P. Lovecraft.

In the films based on the story, he is portrayed by Jeffrey Combs, who played a number of roles in Star Trek-related media, including Weyoun and Brunt on Star Trek: Deep Space Nine and Shran on Star Trek: Enterprise. He also portrayed Dr. Vannacutt in the 1999 film House on Haunted Hill, Brainiac in Injustice 2, the Scarecrow in The New Batman Adventures and Batman: The Animated Series, and Shepard Lambrick in Would You Rather.

Herbert West is a mad scientist who created a strange serum that allowed the dead to be brought back to life, at the cost of their humanity - often becoming violent zombies intent on murder and mayhem. Despite this, Herbert continually shows an obsession with overcoming the limits of life and death, thus he continued to raise the dead despite the horrible consequences.

Like many mad scientists, Herbert has also been tasked with defeating his own experiments on a few occasions, though his madness always seems to ensure he will make another batch of monsters in the future.

Herbert could arguably be considered a villain but he is not necessarily an evil character . In fact, he seems to lack any sort of moral alignment, as to him, the important thing in life seems to be conquering death itself and he doesn't care what he has to do in order to achieve such goals.

Herbert deviates slightly from Lovecraft's original design in having brunette hair rather than blonde, the films also have Herbert West living in the modern age, other than these minor changes the character remains virtually the same in both the book and the movies-being a mad scientist whose actions in raising the dead trouble his colleague (the main character) and has disastrous consequences. Another difference is that Herbert is devoured by the zombies he resurrected from an army serving in World War ll by the end of the book.

Herbert West is introduced in a university in Switzerland where he was caught by police experimenting with his formula. The formula known as Re-Agent, was used on a colleague of his named Dr. Hans Gruber. The resulting dose brought the originally deceased Gruber back to life. However upon coming to life Gruber is enraged, attacking anyone he can get his hands on, before his eyes explode killing him. While he denies it, it's debatable whether or not Herbert killed Dr. Gruber. Herbert is later seen in Miskatonic hospital in Arkham Massachusetts. Dean Halsey introduces West to Dan Cain and Dr. Carl Hill, whom he plans to attend Miskatonic University with as a student. Upon meeting Hill, he accuses him of plagiarism of Dr. Gruber's work.

Earning his ire. West later interrupts an intimate moment between Dan and the dean's daughter, Meg. Inquiring about Dan's ad for a room for rent. Meg is suspicious of West, but Dan accepts. Upon attending Dr. Hill's class, Herbert disrupts his class by loudly breaking pencils. Prompting Hill to dismiss class early and threaten to fail West. Later that night West catches Dan and Meg in his room. They found Dan's cat Rufus, dead and inside his miniature refrigerator next to a flask full of green liquid.

Meg suspects that West killed Rufus, because Rufus didn't like him. However, West explains that Rufus got his head stuck in a jar from knocking over garbage. That he kept the body so he could break the news to Dan when he got home. When Dan inquires about the liquid, Herbert harshly dismisses him and blackmails him regarding his relationship with Meg. Later that night Dan stumbles upon West being attacked by a ferocious animal. After Dan kills it, he realizes that it's Rufus.

West explains to him the process of the Re-Agent and shows it to Dan, hoping he'd recruit him. He brings Rufus back to life, which frightens Meg. When he hears of Dean Halsey expelling them both, West tasks Dan to sneak him into the morgue so they could prove his Re-Agent works. After finding a body to test the Re-Agent on, Herbert and Dan seem to have failed. Just as they were about to give up and go home, the body rises and attacks them. When Herbert yells for it to stop, he finds to his surprise, the body listened to him. Dean Halsey, in an attempt to look for Dan hears him screaming for help in the Morgue Freezer. The Cadaver escapes and attacks Halsey killing him. Using a bone saw, West kills the corpse, but is too late to save Halsey. Not wasting an opportunity, they test the Re-Agent on him. Strapping him to the gurney so that he doesn't attack them. Halsey comes back and is naturally angry at what happened to him. He tries to strangle them both, only for Meg to stop him. Seemingly recognizing her, Halsey stops and ducks into the corner when security arrives. West was able to play it off like Halsey went mad and attacked them, which fools the guards and the police later on. Back at home, Dan finds out that Herbert has been using a diluted version of the Re-Agent, to prevent insomnia and keeping his brain sharp. Which was wearing off due to the excitement of their night. With Dan's help, he injects a recent dose into himself.

When Dan goes to confess to Megan, West is busy working on his Re-Agent. Only to be greeted by Carl Hill, who has discovered that Halsey is dead and wants West's formula. Using hypnotism and blackmail, Carl convinces West to give him is notes and demonstrate the formula. However when he insults Dr. Gruber and threatens to kill Dan, along with vowing to get famous by stealing his work, West breaks out of the hypnosis. He kills Hill and decapitates him with a shovel. However, feeling an itch to experiment, he decides to test the Re-Agent on the severed parts. Specifically Hill's head and Torso. While waiting, Hill awakens, becoming the first Re-Animate to be alive and fully conscious. He calls West a bastard for killing him, while his headless corpse knocks West out and escapes, stealing his work in the process. West freaks out upon waking and informs Dan what happened. Dan in turn informs him that Hill had Halsey Lobotomized so that no word of the formula came out and he could control him. Because they are the only ones that know the truth, Dan anticipates that Hill would eventually come after them. However they realize almost too late, that Hill lusts for Megan, so Dan runs to the house to warn her.

West finds Dan at Meg's house, knocked out and Meg kidnapped. They set out to go after Hill. When Hill was in the midst of sexually assaulting Meg in the infamous head scene, West stops him. Berating him for wasting the Re-Agent for such petty measures. However Hill, anticipating West's arrival brings to life several re-animates. All of them lobotomized and under Hill's control. They restrain West and attack Meg and Dan. Hill planning on lobotomizing West alive. However when Meg gets through to Halsey, Halsey attacks Hill, freeing West and Crushing Hill's head. West in an attempt to destroy the body, overdoses it. Only for each individual part to come to life and restrain West. Dan tries to save him, but to no avail. Forcing West to toss him his bag, with the remaining Re-Agent and his notes. He is never seen again. 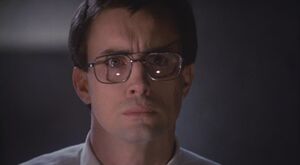 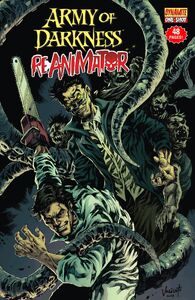 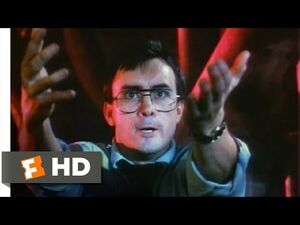