Making those who seek esoteric and beneficial knowledge his servants.

Using Miraak as a puppet.
Luring mortals into Apocrypha with their lust for the Black Books.

Learn the secrets of the Skaal (succeeded).

Hermaeus Mora, sometimes also reffered to as Herma Mora, is a recurring antagonist in the Elder Scrolls series. He's known by the mortals denizens of Tamriel as the Daedric Prince of Knowledge. His sphere is the scrying of the tides of fate, of the past and the future. Mora's plane of Oblivion is called "Apocrypha", which is an endless library full of forbidden knowledge, teeming with ghosts that are afflicted with a thirst for knowledge that they sought when they were among the ranks of the living.

The artifact that Mora bestows upon his Champions is called "The Oghma Infinium", which is a powerful tome of knowledge that was written by the elven god Xarxes, a god of secret knowledge and ancestry.

In The Elder Scrolls V: Skyrim, he was voiced by Wes Johnson, who also played Mr. Burke in Fallout 3.

In The Elder Scrolls IV: Oblivion, Hermaeus Mora has a shrine in form of a statue depicting him as a formless mass of eyeballs, tentacles, and crab claws. Mora's Daedric Quest in Oblivion involves capturing souls from each of the ten races. Once the quest is completed, the player is rewarded the Oghma Infinium.

Hermaeus Mora is overall morally neutral, caring more about collecting secrets and knowledge for its own sake rather than seeking power. Despite being the most monstrous and inhuman out of many of the Daedric princes, Hermaeus Mora is very polite, affable, and rather generous, as he happily gave the Dragonborn not only the Oghma Infinium, but also the words of power to the "Bend Will" shout, which is one of the most helpful shouts in the game.

Of course, this generosity only extends to those who aid Hermaeus Mora and follow his commands. Those who plot against him or attempt to hide secret knowledge from him end up killed by Hermaeus Mora quickly and without mercy. This was demonstrated in the Dragonborn DLC, where Storn and Miraak were impaled by Hermaeus Mora for attempting to hide knowledge and wisdom from him.

Hermaeus Mora is depicted in Daggerfall and Oblivion as a towering, amorphous mass of green sludge with numerous eyeballs, tentacles, and crab claws protruding from its mass.

Mora's appearance in Skyrim changed very drastically from his older counterparts. In Skyrim, Hermaeus Mora is first depicted as a "Wretched Abyss", a floating purple-and-black portal hanging in the air that speaks in his voice. Later, he is shown as a solid black portal from which several tentacles stretch out towards the player, and dozens of greenish-yellow eyes blink and bubble in and out of sight. A single large eye with an hourglass-shaped pupil sits in the center. 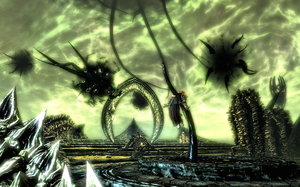 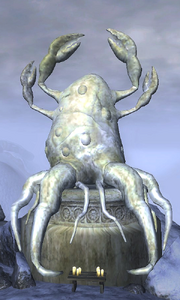 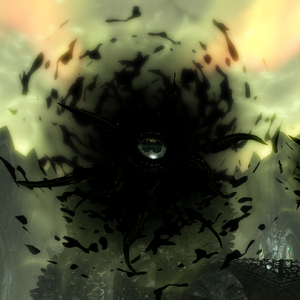