Colonel Herman Dietrich is a major antagonist in the 1981 iconic action-adventure film Raiders of the Lost Ark, the first installment of the Indiana Jones film series.

He was the commanding officer during the Nazi expedition to find and obtain the Ark of the Covenant for Adolf Hitler. He enlists the help of Dr. René Belloq and Major Toht to do so.

He was portrayed by Wolf Kahler.

Herman Dietrich was placed in charge of the 1936 excavation of Tanis, Egypt to find the Ark of the Covenant for Adolf Hitler, who had an interest in it occult artifacts. To this end, the Nazis hired French archeologist René Belloq. Dietrich doubted how much Belloq could be trusted, but was forced to hire him to avoid any other parties to seek for the Ark. He was accompanied by his right-hand Major Gobler, who followed him everywhere.

Using the seared hand of Gestapo agent Toht, Belloq created a duplicate of the Staff of Ra's headpiece, albeit without crucial information on the other side of the medallion. Consequently, the German expedition was unaware that the excavation was being done in the wrong place. Dietrich, frustrated, sent a message to Berlin on their progress, which was intercepted by American intelligence agents who subsequently tasked Belloq's rival, Indiana Jones, with finding the Ark before the Nazis could. Belloq chastised Dietrich for the "premature" communique, to which Dietrich countered that Hitler demanded constant reports. Dietrich and Gobler suspected Indy's girlfriend Marion Ravenwood, who owned the original headpiece, had the information they could use, and despite Belloq's protests, had Toht interrogate her that night, but to no avail.

At dawn the next morning, Dietrich and Toht argued with Belloq until the latter noticed another group of diggers, led by Indy and his friend Sallah, a good distance away from the main dig site. They descended upon the diggers and claimed the Ark for themselves. Dietrich, eager to return to Germany with their prize, mockingly gave Indy some company by having Toht throw Marion into the Well of Souls with him. Belloq, who wanted Marion for himself, angrily protested, but Dietrich ignored him, stating that only the mission for the Führer mattered and Marion was no longer useful to them. While a flying wing was being prepared to transport the Ark to Berlin, Dietrich offered to toast their success with Belloq, who refused, still bitter about Marion's imprisonment. However, Indy and Marion escaped and accidentally destroyed the plane while trying to take control of it. Dietrich ordered his men to load the Ark onto a truck and take it back to Cairo and put it on another flight. While riding with Belloq and Toht in the staff car leading the convoy, Indy chased them down and commandeered the truck, killing most of Dietrich's men and Gobler before ramming the staff car off the road. The Nazis followed him back to Cairo, but he had disappeared, and the Ark with him. The Nazis left empty-handed, although not before a fruit vendor gave Dietrich a melon, which he angrily threw out into the street at a barking dog.

The next morning, the Nazis caught up with Indy at sea aboard the U-boat Wurrfler, recapturing the Ark and Marion, who tried to punch Dietrich but was stopped by Simon Katanga, captain of the Bantu Wind. Katanga falsely claimed he had murdered Indy and tried to persuade the Nazis to leave Marion, but Dietrich took her anyhow and silenced the captain with a threat to have the Bantu Wind sunk. The Nazis returned to the submarine with their prizes and took them to a remote island north of Crete, where Belloq planned to open the Ark before presenting it to Hitler. Being a Nazi, Dietrich disdained Jewish traditions and questioned the necessity of the ritual, but Belloq convinced him that it was better than opening an empty Ark in front of Hitler in Berlin. There was a tense moment when Indy, who had followed them, threatened to blow up the Ark with a bazooka in an attempt to rescue Marion, but Belloq called his bluff and convinced him to surrender.

Without any further obstacles, the Nazis proceeded to the Tabernacle at the island's summit, where the Ark was opened that night. Watching Belloq conduct the ritual alongside Toht, Dietrich reached into the Ark and found only sand, which he threw to the ground in fury. His anger turned to surprise and wonder as spirits emerged from the Ark. Dietrich was not sure what to make of the experience until one spirit approached and suddenly transformed into a decaying, corpse-like entity, baring its fangs and howling at them. The sight of the Angel of Death made Dietrich and his cohorts freeze in terror as a fireball rose from the Ark and engulfed Belloq, using him as a conduit to strike down the assembled Nazis. As he trembled in fear, Dietrich was killed as the Ark's powers shrank and crushed his head. His collapsed remains were then swept up and incinerated by the following firestorm. 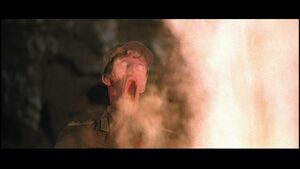 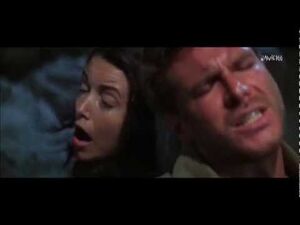 Raiders of the Lost Ark - The opening of the Ark - The LORD's vengeance!!