Messenger of the Gods

Prevent the fall of Mt. Olympus (all failed).

Hermes is the messenger god of Olympus and a major antagonist in the video game God of War III. He is the son of Zeus and the half-brother of Kratos.

He was voiced by Greg Ellis.

After the death of Argos and Kratos’ pursuit of his assassin, Hermes’ son, Ceryx, was sent to stop his pursuit, only to be killed. It is theorized by many that Hermes himself was the one who killed Argos, (a feat his mythological counterpart performed) which would mean many of the gods of Olympus had been plotting against Kratos. Either way, Ceryx's death gave Hermes a reason to hate the Ghost of Sparta.

Hermes was seen amongst the gods battling the Titans during the stories told of the Great War during the game. He also attended Zeus' meeting of the gods on Mt. Olympus after Kratos defeated him, when the Titans began attacking.

As the Titans scaled Mt. Olympus, Hermes was seen watching the events while flipping a coin before he leapt down from where he was watching with the other gods.

Hermes began running down the side of the mountain to join the battle but wasn't seen after this, leaving his location unknown.

Later on, he met up with his brother, Kratos in the Labyrinth and taunted the Ghost of Sparta while boasting about his speed. After trading a few insults with the Spartan, Hermes ran up the Chain of Balance and Kratos climbed after him. The two met up again in the Chamber of the Flame and the messenger god taunted him again about his lack of speed.

Hermes and Kratos begin a chase with Hermes leading the Ghost of Sparta all around the Olympian Citadel. Eventually the Ghost of Sparta managed to launch a boulder at the messenger god from a catapult that he chained himself to with his Blades of Exile. It crashed into a large statue of Athena that Hermes had perched himself on, wounding him in the process.

Now cornered by Kratos, the messenger god attempted to fight using his formidable speed and agility, but his wounds kept tiring him out, forcing him to continually stop and catch his breath, this leaving him open to attack.

Defeated, Hermes taunted Kratos one more time and was slain when the Ghost of Sparta cut off his legs to take his boots.

The messenger god's body then dissolved into a swarm of disease-ridden flies that covered the land.

Hermes is rather playful and immature as well as arrogant and boastful of his great speed. He usually acts rather laid-back, often flipping his coin when he is idle, as well as quite talkative, constantly taunting Kratos about his killing his family members, his desire for vengeance, and his inability to match his speed. But Hermes’ seemingly light-hearted manner seems to be a mask for his seething hatred towards Kratos, which becomes more apparent during their talks and culminating in their final confrontation. Hermes remains defiant to the end, mocking Kratos’ “sense of honor” and saying that he will only betray himself in the end.

Being a god, Hermes is extremely powerful and possesses immortality as well as invincibility towards most forms of attack. He is the fastest of all the Olympians due to his winged boots, which let him move fast enough to defy gravity to do things such as running up walls and jumping incredible distances. Hermes seems to have the power to generate fire since his hair resembles fire and his boots generate fire when he runs. 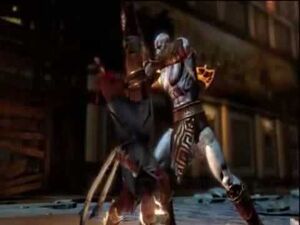 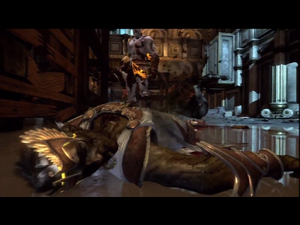 Hermes' Corpse about to dissolve into plague-filled flames.