Field Commander of the Chitauri Army

To kill Captain America and his teammates (failed)

To help his fellow Chitauri conquer the Earth (failed)

Alien Nazi
Herr Kleiser is one of the major villains in the Ultimate Marvel universe. He has first appeared in Ultimates #10. He is an alien that disguises himself as a Nazi.

Kleiser was a high-ranking member of the alien hierarchy known as the Chitauri, and was part of a group who infiltrated Earth during World War II. Taking the form of a Nazi officer (by absorbing and devouring him), he and his fellow aliens contacted the Nazi party and attempted to help them win the war by offering advanced technology. The Chitauri wished to utilize the Nazis to conquer Earth and impose "order", erasing all individuality, which they saw as an aberration. Near the end of the war, Herr Kleiser faced Captain America, and was defeated not by brute force but by clever strategy and misdirection; Kleiser never forgot this humiliating defeat. For decades, Kleiser and the other Chitauri slowly built a new power base and secretly influenced human affairs to prepare for another takeover attempt. 60 years later, Herr Kleiser infiltrated the S.H.I.E.L.D. Psi-Division, and planted false information designed to lure the Ultimates to an island in Micronesia where they were supposed to be destroyed by a nuclear device. However, Iron Man's force field and Thor's dimension-warping hammer allowed the Ultimates to escape unharmed, although thousands of S.H.I.E.L.D. personnel were killed. Kleiser and the remainder of his troops also infiltrated the Triskelion, the headquarters of S.H.I.E.L.D. and the Ultimates. He captured The Wasp and brought her to Area 51 in the desert near Phoenix, Arizona.

A short time later the remnants of the Chitauri fleet came to Earth and informed Kleiser they were soon to destroy the planet; at this point it was revealed the Ultimates had survived and a large battle began. During this fight Herr Kleiser and Captain America finally engaged in personal combat, during which Kleiser demonstrated superhuman strength, great durability and near-instant healing, as well as being able to perceive General Fury while the latter was in "light-negative" (invisible) mode. Captain America was nearly overcome by Kleiser and briefly ended this battle by cutting the alien in half. However this did not finish him and Captain America had to have Bruce Banner intentionally traumatized so as to bring out the Hulk. Captain America then told the Hulk that Kleiser had been "all over Betty" and the Hulk promptly pounded Kleiser into the ground, tore him apart and ate him. The invading fleet was defeated, and Iron Man and Thor disposed of the alien's Doomsday bomb. Banner's excretions were later collected by S.H.I.E.L.D. to analyze and destroy, as Herr Kleiser was a shapeshifter and might have been able to survive even the digestive process.

In the first film, he is present in a top-secret Nazi base, where the Nazi/Chitauri rockets are being perfected until it seems to have been killed by a lid near the rocket. In the second film, Kleiser, on the orders of the Chitauri hierarchy, invades Wakanda to bring back their shipments to Vibranium in 40s. Then the Kleiser was buried in the field of the mineral-Captain America and the Black Panther, the last one whose father, King T'Chalka, was killed by Clayzer. In the final of the conflict, Panther and the lid sealed Clayzer in Wakida's deposits is a vibranium.

Herr Kleiser is a skilled fighter, able to sustain a long and brutal combat against Captain America, and then holding a resistance to various direct blows from the Incredible Hulk. He is revealed to have accelerated healing powers, strong enough to cure a direct shot to the head, being cut in half and escape unharmed from a jet’s explosion. His "healing factor" has helped him survive, without any form of aging or illness, to the 21st Century. 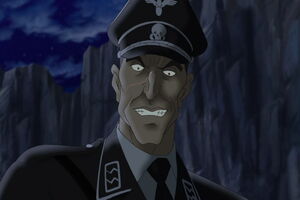 Kleiser disguised as a Nazi member. 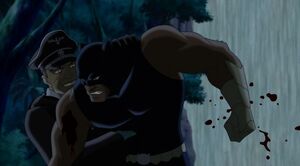 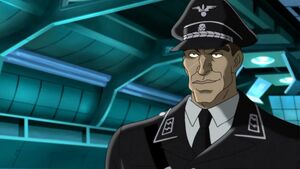 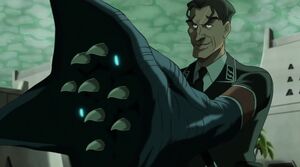 Kleiser firing out claws from his shape-shifted right arm. 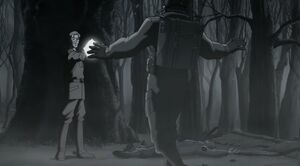 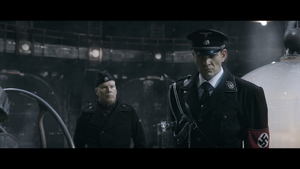 Götz Otto in the form of Herr Kleiser. 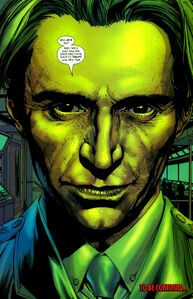 Herr Kleiser in the comics. 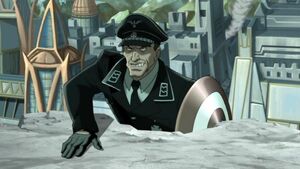 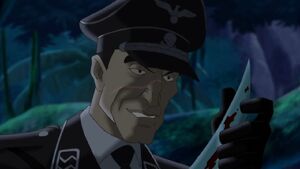 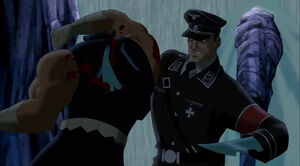 Retrieved from "https://villains.fandom.com/wiki/Herr_Kleiser?oldid=3494716"
Community content is available under CC-BY-SA unless otherwise noted.