Herrscher of the End

Herrscher of the End

Herrscher of the Ultimate Destruction

End all life in the world to create an existence where the Houkai's Will rules supreme over all creations (succeeded partially).

Known as the Final Herrscher by the new civilization, the Herrscher of the End was considered the most powerful Herrscher of all existence and became the Goddess of the Houkai more than 52,000 years ago. In Guns Girl Z, she was born thanks to the machinations of Sovietic researchers of the Kukuria's Orphanage and the leader, Cocolia of the Anti-Entrophy. Primarily, the Herrscher of the End was actually an existence born from the fusion of the Second Herrscher (Herrscher of the Void of the Old World) and the last remnant of Kaslana family, Kiana Kaslana who was the daughter of Siegfried Kaslana and the late Cecilia Schariac who died in battle against the Second Herrscher but in the new Honkaiverse of Honkai Impact 3rd, her origins are unknown. Because of how powerful and cruel she was, the new human civilization baptized her as the "Herrscher of the End", the Herrscher born to destroy all living things. It was much later revealed that just like all Herrschers, she was another servant of The Will of Honkai, also known as the Honkai God.

After destroying every resistance of humankind's technology and Dr. MEI's creations, the Herrscher put an end to all remnant saviors of humanity and destroyed the human civilization with the 3rd Eruption. She was an entity so dreadful and scary that stories about her were later considered myths by most of historians, researchers and scientists whom preferred to leave the legendary Herrscher of the End as a myth of the ancient civilization. It's unknown what happened to her after she completed her mission in destroying humanity from the Previous Era.

Like her God Kiana form in Honkai Impact 3rd she is voiced by Shan Xin in the Chinese original version who is considered the most famous virtual vocaloid of the country. Shan Xin also voiced Enma Ai in Hell Girl in one of her few villainous roles.

The legendary Herrscher who brought the end to the ancient civilization of Earth and was considered as the most evil and dangerous Herrscher of all time for alone destroying the reality before the rise of the new human civilization of Earth. She was a fusion of the Herrscher of the Void of the Old World with the decedent of Kaslana family, Kiana Kaslana, daughter of Siegfried Kaslana and Cecilia Shariac. According to the legends, the Herrscher of the End was called the Last Herrscher who fought mankind's strongest warriors for the fate of the world but defeated the last remnants of all humankind before destroying the world. Her current whereabouts are unknown.

In the non-canon DLC Fire Moth, God Kiana woke up in the same world she destroyed but attempted to drag the entire world to death with her to end everything that is beautiful and ugly for not being worth of her existence. Her reign of terror came to an end when she was defeated by the combined forces of Houraiji Kyuushou and the Herrscher of the Thunder. 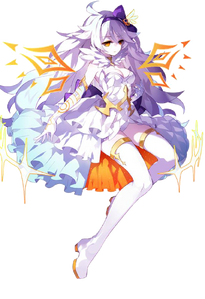 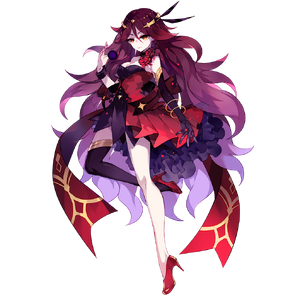 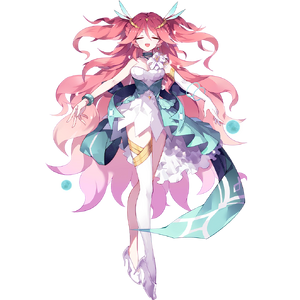 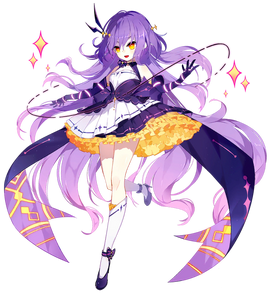 A peculiar fact about the Herrscher of the End is that she was born from the fusion of three different entities: Sirin, Herrscher of the Void (whom can be considered a single entity) and Kiana Kaslana, the determinated S-Valkyrie of Freya Academy. The Herrscher of the End, despite being a fusion of different people, she was a single entity capable of emotions of her parts; from love, kindness and hatred. However, because of how powerful she was, she deemed herself to be perfect (both in power and appearance), so perfect that the world she was in was unworthy of her presence.

Despite being composed of good people, the Herrscher of the End knew what she was doing was wrong but felt pleasure from seeing mortals, people weaker than her, suffering to the point she had some kind of twisted joy of snapping their necks right in front of their loved ones. She was a ruthless, bloodthirsty and violent Herrscher that could be considered even worse than all combined Herrschers of the Old World. She killed any and all humans she could for the sole purpose for the fun of it, unlike other Herrschers that are moved by hatred, ignoring the fact that many humans were also vessels of other Herrschers. In the New World, she is a recluse who wants nothing to do with humans and prefer to avoid contact with them at best, leaving only her creations to do her dirty work. As Otto Apocalypse puts it, she sees other humans as nothing more than worms, ignoring any and all attempts by them to converse or attend their requests if they want to please her somehow.

While in her God Form she has shown to be very destructive, narcissistic, nihilistic, callous and misanthropic as described before in legends about her. Even so, the Houkai God is known for retaining a stoic and composed personality, even after striking down all of mankind's strongest warriors, the Herrscher of the End still maintained her stoic composure. However, the Herrscher of the End, for being so powerful and invincible, possesses a love for battle that defies her concept of perfection, as Fu Hua theorized she was looking for a worthy challenge and let out a smile after Raiden Mei promised her she will have a worthy fight once she becomes a Herrscher herself.

When God Kiana comes across strong opponents, she shows a more excited side to herself, such as during her fight with the Houraji she smiled with excitement and anticipation after witnessing the power of her new Herrscher of the Void, even giving her praise.

The Herrscher of the End was described to have countless powers for being able to use all Herrscher Cores known and even beyond human's comprehension. She is basically an omnipotent entity to be almighty in every sense and aspect; the perfection itself. The Herrscher of the End can achieve and do absolutely anything without any limit or condition to her abilities (from using all elements of nature to cause natural disasters in global scale, controlling time to the point she can reset the world's timeline at any moment she wants and even alter the aspect of space itself), including the conceptually impossible and logically impossible.

Schicksal describe the Herrscher of the End as "bigger than infinity" or "beyond the infinity", being able to do everything in reality, from creating new worlds, creating life and killing all life forms known with a blink of an eye. She possess all powers and everything beyond all Houkai and Herrschers that are already considered "Gods", existing on level inconceivably above/beyond any other power/concept.

She is fundamentally invincible, cannot be harmed by human's weaponry, only by other Herrschers with Supreme God-level status similar to hers and is completely immune to all Herrschers. According to legends, her only and true power was complete destruction, being capable of erase everything and anything from reality in a blink of an eye. Another example of her power is that she had the Herrscher Core of the Herrscher of the Logic, granting her omniscience. Her mind is unblocked to the entire world and beyond, there is absolutely nothing which she do not know and understand, therefore she know every answer to every question, past, present, and future.

She was absolutely immortal, so much that her immortality is considered an absurd by the standards of other Herrschers. She can not die, age, get sick, be permanently wounded, is absolutely self-sustained and, as her mind and soul are as immortal as her biological body, she is also immune to mental/spiritual damage.

The Legend of God Kiana