Retrieve the Light Prism from Earth in order to live up to Homeworld's expectations of her.

Destroy Steven and the Crystal Gems (failed).
Go in a journey to find out the truth about herself (ongoing).

Hessonite is a minor flashback antagonist of Cartoon Network animated series Steven Universe, and the main antagonist of the 2017 video game Steven Universe: Save the Light. Hessonite is a Garnet type gem and a Homeworld commander, serving as part of Yellow Diamond's court. In the story of the game, Hessonite came to planet Earth in search of the Light Prism with the help of her underling, Squaridot.

She was voiced by Christine Baranski, who also voiced Chef in Trolls, and Kaos' Mom in Skylanders.

Hessonite wears a sparkly, high-collared cape over an orange-red jumpsuit, thigh-high white boots with jaffa-colored soles, and white elbow-length gloves. Hessonite's gemstone is located in the center of her chest and is a rounded rectangle with a rectangular facet.

Hessonite is physically one of the tallest Gems known in the game, standing about a head higher than Garnet. She has a light orange complexion and pale yellow hair in a large curly afro drawn back to a widow's peak. She has a dark burgundy unibrow and a light yellow marking in the shape of the Prism over her left, vermilion eye.

Although Hessonite never appeared physically, she was drawn by the half-corrupted Nephrite indicating she was her superior during the war.

Many years ago, the Prism was given to Hessonite by Yellow Diamond herself to make her "perfect". Back in the gem war, Hessonite and her troops were sent to destroy the Crystal Gems, and she mostly used the power of the Prism as benefit against them. It's also revealed that Hessonite herself fought Rose Quartz in battle and lost the Prism in the process. Afterwards, Hessonite along with the rest of Homeworld were forced to abandon the planet for thousands of years after the corruption light seemingly killed all the Crystal Gems left on the battlefield.

Following the events in Attack of the Light, the Prism acted strange after feeling the presence of someone else. After Steven and Connie find the Prism at It's a Wash, they and Greg notice a giant spaceship hovering over them. Hessonite lands on Greg's car wash in search of the Prism, and proceeds to take it back from Steven, despite the Prism itself not wanting to go with her. Hessonite then orders the Prism to attack the group but is left disappointed in the weak form that the Prism transforms and decides to leave with the Prism. Steven and the gems go then in a journey to stop Hessonite as she is trying to fix the artifact to make it obey her again. At some point, they encounter Hessonite in the forest where she uses the Prism to create a monster to take care of Steven and the rest.

Later on, after defeating Squaridot, she accidentally reveals that Hessonite is at the Strawberry Battlefield. Peridot says Hessonite is known in Homeworld as commander and a war hero given her role back in the rebellion using the full potential of the Prism against the Crystal Gems. Peridot manages to help Steven and the gems locate Hessonite who is now at the Sky Arena. There, Steven and the gems discover that Hessonite is planning to go to every place she used the Prism back in the war so it can have its memories back as a weapon for Hessonite. Later, they figure out Hessonite went back to the Gem Battlefield and entered a temple hidden at the same location of where the Pyramid Temple used to be.

They follow Hessonite into the temple and Steven tells her that the Prism doesn't want to be with her, to which Hessonite accuses Steven of having scrambled its memory. The Crystal Gems engage in battle with Hessonite, but they prove to be no match for the commander as she slices and poofs them all in a matter of seconds, only leaving Pearl intact. Both engage and Pearl recalls the events of the war when Hessonite and her troops battled the Crystal Gems. Hessonite offers Pearl a chance of just give up and become her Pearl, argumenting that a legend like her deserves her own, but Pearl refuses and keeps on fighting for Rose. It is then when Steven grabs the Prism and is transported into an astral plane where he discovers the backstory of Hessonite and the Prism. After waking up, Steven has a vision of Hessonite at Bismuth's forge. It's also revealed that Bismuth had a secret entrance that was found by Hessonite in order to upgrade the Prism and for the time Steven and the gems arrived in, she already had escaped to a bigger warship orbiting Earth.

They use Lion to travel to the warship where they face Hessonite once more. She wonders to herself how could she leave the Prism behind back in the rebellion unaware that there were Crystal Gems alive to use it. Steven tries to explain the situation to Hessonite but she refuses to hear any words coming from him, telling him that she's already "fixed" the Prism and commands it to destroy him, Garnet, Pearl and Amethyst. As they weaken the light warrior, Steven tries to reason with the Prism, as Hessonite keeps commanding it to kill Steven. This ultimately makes light warrior find itself conflicted with following anymore requests. A disappointed Hessonite decides she has had enough and fights Steven and the gems herself. Unfortunately for her, she is soon defeated by the power of four combined.

Upon feeling defeat, Hessonite has a breakdown of her being defective for failing while the Diamonds said she was perfect and always would be. She says the Prism helped her to have said perfection and recognizes that it now belongs to Steven for being the one that activated it first. Depending on the player's choice, Steven can have the Prism choose between staying on Earth or with Hessonite.

If the player chooses with Hessonite, she feels happy and confident again and says she and the Prism have a lot of worlds to conquer for Homeworld as both finally leave. Connie questions if something bad will come out of this and Steven says he believes that someday the Prism will choose to save itself.

If the player chooses to stay on Earth, it reforms back into Light Steven. Hessonite comments how much she wanted it back but quickly realizes it is time for her to find out more about herself rather than believe in what the Diamonds said about her and leaves to go in a journey of self-discovery. Afterwards the Prism is seen hanging out with Steven and the Crystal Gems at the barn and later outside the beach house.

Legs From Here to Homeworld

Hessonite was mentioned again when Nephrite was partially uncorrupted by the diamonds before returning back to her monster form. 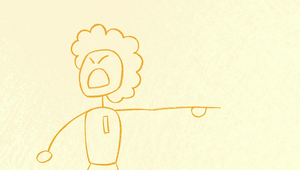 Hessonite as seen back in "Monster Reunion" 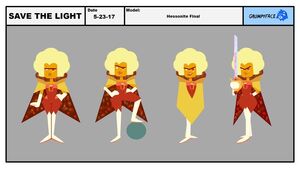 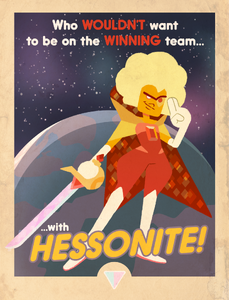 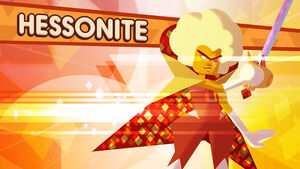 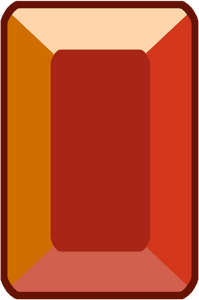 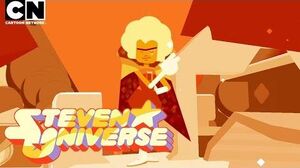 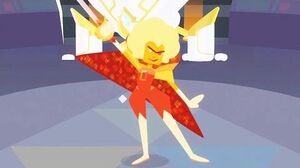 Steven Universe Save the Light All Hessonite Scenes 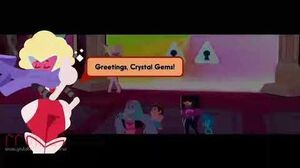 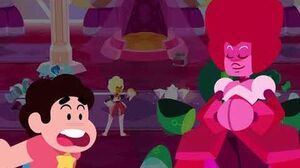