Leader of the Hidden Chain

Restore the Mandalorians to its warrior's ways

Heta Kol is the secondary antagonist in the post-storyline in Star Wars: The Old Republic: Onslaught. She is the leader of a group of disenfranchised Mandalorians called the Hidden Chain, Heta Kol rose to power through a combination of political acumen, skill in combat, and an unswerving belief that Mandalorians should use their skills in war to further their own agenda, rather than acting as mercenaries for hire. This belief appealed to many clans that had split away from Mandalore the Avenger. Kol herself took on the title of Field Marshal as a tribute to the Neo-Crusader movement from centuries past.

Kol's current supporters come from the ranks of Clan Varad, the Ash'ad, and through a mutually beneficial arrangement with the ex-Mandalorian mercenaries, the Dar'manda.

She is the primary antagonist of the flashpoint - The Spirit of Vengeance.

Heta Kol launched an attack against the Mandalorian ship the Spirit of Vengeance II, with Clan Varad, the Dar'manda, and the Ash'ad following her into battle. Near the end of the attack, she engaged in battle with the Alliance Commander and Rass Ordo, and was defeated. However, upon learning that her followers had secured the banner of Clan Cadera, she pulled out and retreated from the fight.

Following the battle, she met with representatives of the three groups that had joined her, which included Tyrus Brokenblade, Bask Sunn, and Durn Wynnward, as well as a number of members from each group. Upon hearing them arguing with eachother, Kol pulled out a thermal detonator and tossed it down towards Brokenblade, who managed to catch it in his hand and prevent it from exploding, so long as he kept his hand on it. Kol claimed that they could only truly accomplish their goals if they were working together. To prove this point, she stabbed Brokenblade twice to show that they all needed to rely on each other. She then dismissed everyone to fulfill the orders given to them. 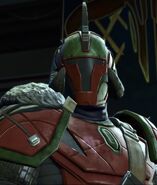