Increase his power over magic (succeeded).

He is voiced by Khary Payton, who also voiced Cyborg in the Injustice series, and in other media.

Although he has battled Ben several times, he is not his primary nemesis, that one being Gwen. He makes his debut in the episode "Lucky Girl", where he tries to recover the five Charms of Bezel and acquire the "Archamada book of spells", these items combined grand the wielder unimaginable power, though he fails, thanks to the Tennyson's interference, most notably, Gwen's. Hex returns in Tough Luck; his niece Charmcaster breaks him out of prison. Together, they search for the Keystone of Bezel, which he plans to use to recreate the other five Charms and multiply his power tenfold. Again, Gwen gets the Keystone and is soon attacked by the pair. Hex fails again due to both the Tennysons interference and Charmcaster betraying him so she can take the Charms for herself (though she fails as well).

Hex makes his return during the third season. In the episode Time Heals, Gwen infiltrates his house to steal the Grimoire of Archamada, and, despite Paradox's warning, uses it to time travel to the past and stop Ben and Kevin Levin from hacking the Omnitrix and preventing Kevin's mutation. Though she succeeds, her action causes Hex to take over the world. Thanks to his magic, the Master magician knows that Gwen is responsible for the creation of this future, and tries to prevent her from turning the future back to normal. However, after a short fight against Charmcaster and a possessed Kevin, Gwen finds the prison and frees Ben who helps her get back the Grimoire of Archamada and gain enough time to go back in the past and prevent herself from changing the future.

Hex makes his debut on Ben 10: Ultimate Alien in the episode "The Enemy of My Frenemy", where he captures Gwen in a force bubble who was stealing another book and has her at his mercy. Gwen explains that she wants to help Charmcaster who is in Ledgerdomain, and concerned about Charmcaster, he lets her out. Gwen wants him to work with her to help Charmcaster because the last time she saw her was that she was fighting against Adwaita. Hex says that while he loves his niece, he is not about to go on a "suicide mission" and go back to help her. Hex lets Gwen take the spell book and whatever she needs if she leaves him in peace.

In "Charm School", Hex appears again as a Professor in Friedkin University. Hex is revealed to be the magical artifacts and antiquities professor and the favorite teacher of Gwen Tennyson. It seems like the two of them are over their conflictions. He was attacked by Ben Tennyson who hadn't know about his change then. Hex tells him that he can only teach here because he gave every single one of his magical artifacts to the university. After hearing about his niece's return, he tells Gwen and the others that her troubled past deeply damaged her but that she still is good inside and can change, as he did.

When he meets Charmcaster, he offers her to stay with him and be a part of his life. However, Charmcaster double-crosses him and almost turns Hex into a totem in her quest to obtain his staff. Fortunately for Hex, all this happened in his library where he was practically invincible forcing Charmcaster to retreat. Later, Charmcaster manages to fulfill her plans and sneak attacks him disguised as Helena Xagliv, turning Hex into a totem and using his powers to find his staff. At the end of the episode, he, Charmcaster and the other totems were sent back to Ledgerdomain by Gwen who inherited Hex's library.

In "Third Time's a Charm", Hex is set free, and he and Gwen both end up taking Charmcaster into their custody at Friedkin so that she can get better and become a part of Hex's life again as he wanted, which is hinted at having happened by the comfort they now take in each other's presence in "The Most Dangerous Game Show".

He is depicted as a thin white man with tattoos over his body and face, which has a skull-like feature due to the black tattoos over his eyes and cheeks. He also wears a cape and a hood and carries a snake-headed staff with him all the time, presumably the source of his magical powers.

In Ben 10 Alien Force, and Ben 10: Ultimate Alien series, Hex's design has been altered. Hex now wears a different outfit. The outfit is more reddish instead of the previous red and black one, with a whiter face, looking even more like a skull.

In Ben 10: Omniverse, his look discovers complete his head, revealing that Hex has black and curly hair, his face has returned at the mask that he has in the original series, with an addition of a black lighting on the forehead. He was wearing a red jacket with a broche on the white part of the cloth and black pants with black shoes. His hair is tied in a bun with a red headband.

Hex is generally a power-hungry and egotistical individual who will go to whatever lengths to increase his powers and mastery over magic. He is often seen as a cruel, arrogant, and treacherous individual. Clearly unprepared to be a parental figure, Hex is very harsh, abusive, and bad-tempered towards Charmcaster during her teen years, always demanding she respect him and answer his demands with "yes, uncle". Hex is more of an enemy to Gwen than he is an enemy to Ben, and is hateful and rancorous towards her. He clearly states he wants to get revenge on Gwen, not Ben.

However, there is a softer side to his personality, as he has admitted that despite his past treatment of her he truly loves his niece very much, and he is greatly respectful and sympathetic towards his brother Spellbinder as well. This is due to his brother sacrificing himself so that Hex and Charmcaster could escape Ledgerdomain and Adwaita.

Sometime after believing he had lost his niece, Hex abandons his desire for power and dominance, instead finding a new joy in teaching others of the mystical world. As a professor, he shows a more joyful and enthusiastic side while becoming very popular, especially with the female students and faculty. He is also more open in his care for his niece, expressing a desire to have her be a family with him again. However, there are some hints that he has some high standards as he gave Gwen (one of his best students), a lower grade than she expected.

Master Magician: Hex is a vastly skilled magician that can manipulate the forces of magic for many feats. Being a sorcerer, he is skillful at a variety of kinds of magic, mainly black magic, dark magic and mysticism. His magic is powerful enough to match and surpass some of Ben's toughest forms in power.

Hex in the original series. 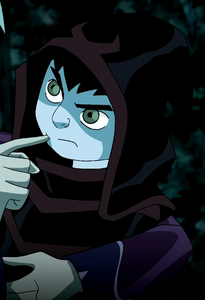 Hex as a toddler. 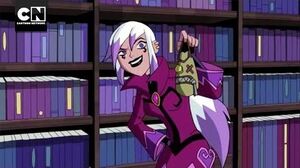 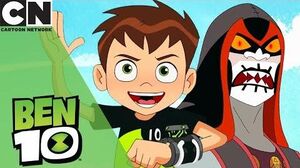