Using the power of nature to become indestructible.

Dark Wizard
Hexis is a vast and crazy dark wizard who appears as the main antagonist of the Heroes of Might and Magic IV: The Gathering Storm game.

Hexis was once known as a kind and benevolent wizard, who later stepped on a dark path, giving him enormous power. He started doing different experiments and his power began to constantly ruin nature around him. He became so powerful that he could override the laws of nature, create various and very powerful wicked creatures, and begin to expand into other areas. His empire had a far greater army and power than almost any kingdom at that time. Hexis's desire for power had become so great that he wanted everything that was not his. His empire extended from Devonshire to almost all the southern territories and even to neighboring smaller kingdoms as well as the effects of his evil magic. Hexis also get allies mainly necromancers, evil druids, death knights and some chaos magic masters.

Five heroes Bohb, Kozuss, Agraynel, Dogwoggle and Alita Eventide have decided in Devonshire to stop the crazy wizard once and for all. However, Hexis's enormous power and armies could only be stopped with very powerful magic relics. But Hexis knew their plan and took steps to prevent it. He sent small groups of his own creatures to the humble lords of the smaller kingdoms in the South, but sometimes sent his own formidable servants.

Some of his notorious servants:

Harkanus: A strong necromancer with many undead.

Mordanis the Black Knight: Hexis most famous and powerful servant. He's a great warlord, a strong warrior and a cunning one.

Pratlan Blacksword: The third of the three crazy Blacksword brothers, King of Kuldross, assassin, necromancer and a strong warrior in one person with some strategic talent.

However, the heroes have acquired the artifacts and prepared for the coming storm.

By the time the heroes returned to Devonshire, Hexis's infection has reached the area and smaller armies had also appeared. The weather has been constantly changed and earthquakes have became commonplace. Hexis was preparing in his castle in the South, but had already sent most of his armies to conquer territories. A pass only led to his empire, but it was blocked by earthquakes. More and more were fleeing from the destruction of corrupt nature. However, the chaos magic masters in Hexis service took the opportunity and began robbing and killing refugees. The five heroes were already very strong and were not surprised by this situation. For days they fought against Hexis's monsters, while they went South, but the number of creatures has not decreased. The heroes found themselves confronted by the Chaos Masters leader and his ranger, and of course Hexis creatures fought on their side. But they were defeated and the Chaos Master and his companions were taken to prison. The five heroes managed to make their way through the pass, however, where Hexis' first truly large army was waiting for them. The army seemed to be victorious, but the heroes persisted and defeated the enemy with the magic relics. The heroes also successfully occupied a fortress but there were three more around him. Hexis's minions, mostly necromancers and evil druids, immediately assembled troops to recapture the lost area to their master. The heroes, however, began to become a little uncertain and afraid as nature became more and more strange and frightening. Natural disasters and crazy-crazy events followed each other. One after another more and more possessed, enchanted creatures came, but Hexis' experimental rats were seldom among them. Continuous battles followed each other, but eventually the heroes triumphed, and Hexis' last allies also failed and banished the evil monsters from the area. However, the crazy wizard is ready for the final steps.

Hexis performed various rituals and through these and his researches he obtained his power. By the time the heroes liberated the occupied territories,Hexis made preparations for his last, greatest ritual. If this ritual succeeds, Hexis would gain such divine power by irreversibly destroying nature and he would become unstoppable. It's a four-month ritual, but the heroes are determined to get there on time and destroy the evil wizard and his castle. However, crossing the territories of Hexis took a long time and he have many of his experimental monsters. The monsters, the terrible weathers, the ceaseless cataclysms were a very serious ordeal for the heroes and they felt more and more the awful and evil power of Hexis. The heroes split into three roads that led to the citadel. Dogwoggle went the Path of the Force, where, even in this terrible area, he encountered friendly creatures (especially black dragons), they standing next to him and destroying Hexis's gargantuan forces there. Bohb and Alita Eventide were on the path of Magic, but there were plenty of evil sorceresses and goblin knights. The two powerful heroes encountered serious resistance, but they eventually broke through the defense and continued to gallop toward the castle. Along the way, some fairy dragons joined them. Agraynel and Kozuss chose the Path of Speed. It was probably the shortest route to Hexis Castle, but it was protected by many of its cavalry units (mainly dark champions). As these were Hexis' elite warriors, it was only after big battles that the two young heroes could go on. Hexis almost successfully completed the ritual, but the heroes arrived at the same time. However, the crazy wizard was ready with all his remaining creatures for the final battle. With his immense power and his last remaining army, Hexis looked like he could destroy the five heroes and finally win. However, he did not expect his own actions to cause his downfall. Kozuss and Bohb, who were Grand Masters of Order Magic, performed mass hypnosis on those units of Hexis that were not undead. The monsters fell on each other, a huge killing ensued, and even Hexis was attacked by his own experimental creatures. After the chaos became huge the heroes launched an attack along with the dragons. Hexis' last army suffered a total defeat. The evil wizard still had strength to fight alone and even so, these mighty heroes weren't easy to defeat Hexis forever. Hexis was perished, his castle was demolished. After his death the nature has gradually regained its old form the horrors disappeared and his creatures fled. The darkness in his area never rises again, the five heroes became legends and all Lodwar celebrated them.

Hexis was once a peaceful, benevolent, kind and calm wizard. But his constant desire for power changed his mind completely. Hexis became a power-hungry, destructive, oppressive, frenzied dark wizard. His former personality was completely gone, what he was interested in was power, conquest and rituals. Hexis did not become arrogant because of his power, but prepared everything so that his power would never cease. The heroes describe Hexis as a sick, extremely insane, and evil wizard who destroys the nature.

In the unused game icon Hexis have red skin, with some blue tattoos and have yellow eyes. He wearing a black hooded dress.

Hexis was a dark wizard of unprecedented power. He became so strong that he reached the level of a demigod, and if his last ritual succeeds, he will be completely invincible. 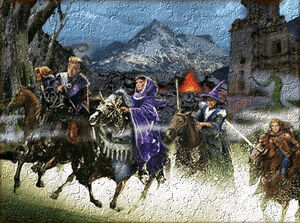 The five heroes after they captured Hexis first fortress. 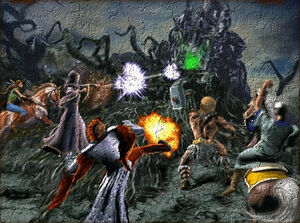 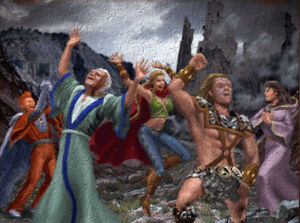 Hexis final defeat, the five heroes won.
Add a photo to this gallery
Retrieved from "https://villains.fandom.com/wiki/Hexis?oldid=3710779"
Community content is available under CC-BY-SA unless otherwise noted.