The Spirit of Destruction

Have revenge on the fairies of FernGully by destroying their land.

Turn the world into a polluted wasteland that he would take over (both failed).

Hexxus is the main antagonist in 20th Century Fox's 1992 animated feature film FernGully: The Last Rainforest. He is the dark and evil spirit of destruction and pollution with the sole desire to destroy FernGully and spread absolute destruction across the world, and kill anyone and anything that he comes across.

He was voiced by Tim Curry, who also played General Von Talon in Disney's Valiant, Pennywise/IT in Stephen King's IT, Drake in Don Bluth's The Pebble and the Penguin by MGM, El Malefico in Mucha Lucha!: The Return of El Malefico, Belial in The Legend of Atlantis by Golden Films, Dr. Frank-N-Furter in The Rocky Horror Picture Show, Maestro Forte in Disney's Beauty and the Beast: The Enchanted Christmas, Dr. Slicer in Disney's Recess, Ben Ravencroft in Scooby-Doo and the Witch's Ghost, and Big Brother in Johnny Bravo.

Hexxus is the evil spirit of destruction who embodies everything that is toxic to nature. As such, his only goal in existence is to cause destruction, decay and death in any way he can. It can be inferred that Hexxus' ultimate goal is to inevitably kill off all of the Earth's creatures by transforming the world into an uninhabitable toxic wasteland after he has taken complete power and control over it as the primordial embodiment of destruction and pollution. He will also stop at nothing to exact his revenge on the fairies of FernGully for his imprisonment by means of manipulating humans to help him in his evil plan.

Hexxus first appeared on Earth in ancient times when the balance of nature shifted. He caused a nearby mountain known as Mt. Warning to erupt like a volcano, and from there, rose out of the Earth and rained down his poison, destroying much in his wake and killing countless living creatures everywhere in FernGully, including humans, who fled in fear, never to return. He was finally defeated by the elderly and wise fairy priestess named Magi Lune, and was imprisoned inside an enchanted baobab tree, which he remained trapped in for hundreds, if not thousands or possibly even millions of years.

While painting red "X" marks on trees, marking them for cutting, the movie's male protagonist named Zak comes across the tree that Hexxus was imprisoned in, he finds it creepy, much like the entity it contains. While he is looking at the tree, Zak is bugged by a fly, and he ends up marking the tree while he was trying to hit it with his aerosol can. That evening, the mobile lumbermill known as "The Leveler", driven by Zak's two superiors named Tony and Ralph, cuts down the tree.

As the cutting begins, the Leveler shakes violently, likely due to Hexxus' supernatural presence, but the lumberjacks ignore the signs and cut it down anyway. The tree is processed and reduced to sheets of wood by the Leveler, releasing Hexxus in a slimy form. Chuckling maliciously, he almost immediately begins absorbing energy from the Leveler. And by the next day, he has regained enough strength to quickly move around and coherently speak. While wondering how he escaped, Hexxus quickly realizes that it is the work of humans. Determined to get revenge upon the fairies of FernGully for imprisoning him and seeing the most useful potential of the human machine, Hexxus initially decides to take control of it and use it to exact his sinister plan.

Under the outspoken and vocal guise of their boss, Hexxus occasionally manipulates the lumberjacks into tearing down the rainforest in the direction of FernGully by the next morning, thereby destroying the very fabric of their world. He then assumes his ghostly main form, singing the song "Toxic Love", before going to the Leveler's roof to oversee progress as he laughs maniacally. Sometime later, upon reaching FernGully after having successfully destroyed much of the rainforest, Hexxus reveals himself.

With Magi Lune gone (having sacrificed herself to give her power to all of the other fairies), it is up to Crysta and the other fairies to defeat him once and for all. He and the Leveler then chase the fairies and drive them into their home tree, despite Crysta's efforts to stop his advance. Zak (knowing the fairies cannot stop the Leveler) has Batty take him to the machine's cab, from which he can stop it. However, Batty gets carried away and flies right up to Hexxus, who laughs and violently swipes at them, sending debris raining down onto Batty, who drops Zak onto the windshield as a result.

As Zak frantically tries to get the lumberjacks' attention, Hexxus immediately scares them off and takes control of the machine himself. As he proceeds to the fairies' home tree, he closes off the Leveler's cab to keep out intruders, but Zak still manages to get inside with Pips' help. Just as Hexxus is about to kill off all of the fairies, Zak turns off the Leveler, causing Hexxus to lose the energy that he was gaining from it and disappear. However, he re-emerges moments later, this time in the form of a giant, demonic, fire-breathing skeletal beast made of oil.

Crysta remembers a bit of advice that Magi gave her before her death, so she takes a seed and flies up to Hexxus. Unfortunately, he devours her as he laughs evilly, to everyone's horror. However, as he prepares to destroy FernGully for good, he begins sprouting branches like a tree. Annoyed, he rips off the sprouts, but the emerging new tree continues to grow. Pips (realizing what is happening) leads the fairies into helping the new tree grow, within moments, Hexxus and the Leveler itself are overrun. Hexxus can only watch in terror as he is sealed within the closing roots, imprisoning him presumably once and for all, so that he may never harm FernGully again.

In the end after his defeat, Crysta and Batty are now revealed to be alive, while Zak (knowing human development can still threaten FernGully) returns home with Tony and Ralph with a new environmentalist mindset.

True to all that he embodies, Hexxus could very much be considered the dark side of nature itself. He is an extremely powerful and destructive menace towards nature. At the core, he relishes destruction, decay, and death, and has nearly destroyed the entire rainforest in the past with his omnipotence and deadliness. As a result, he is feared by the fairies of FernGully and all of the other inhabitants of the beautiful rainforest. Hexxus is a truly evil, cruel, sadistic and manipulative spirit who utterly loathes the beauty of nature and all living things, and he vows to do away with them all to no end until the world is an uninhabited, polluted, and desolate wasteland that is under his complete control, showing his extreme hunger and lust for gaining power.

He is also shown to take great sadistic pleasure in the suffering and death of all living creatures, killing them off without even batting an eye about it at all. Hexxus (at least in his smoke form) usually talks in an extremely respectful, sensual and suave fashion with a rather sophisticated air, and the pleasure he derives from pollution seems to be almost sexual and provocative in nature. However, he is also shown to display great fear when the situation turns against him, such as when Zak turned off the Leveler and then when he was imprisoned once again.

Hexxus is also shown to be an exceptional master manipulator, able to influence others from the shadows, and he also seems to hold some great admiration for humans, describing them as "wonderful creatures, so clever and helpful", possibly because he and humans share much in common, as they both cause destruction to nature and its creatures, although humans may not be aware of the harm they unknowingly cause. Nevertheless, he only sees them as a means to an end and, like all other living creatures, Hexxus takes great sadistic pleasure and delight in their deaths just the same. He also demonstrates extreme overconfidence and enjoys cruelly taunting and mocking his prey to no end; however, his own arrogance is ultimately his greatest flaw, as it caused him to be sealed away by the fairies for the second and presumably last time, ending his cruelty and destruction of FernGully hopefully forever.

As the dark side of nature, Hexxus wields as variety of abilities and powers. He can change his form, which presumably depends on what type of poison or toxin he is currently feeding on, for example: Zak's red spray paint (a shapeless blob of black ooze), the smog produced by the Leveler (a humanoid shadow of black smoke), the oil in the Leveler (a giant flaming skeleton-like beast draped in ooze like a cape), or anything else.

He is shown to be able to mimic seemingly any voice. He is also able to breathe fire, both in his smoke and fire forms. His smoke form also appears to be able to cast bolts of acid. Hexxus can also possess machines, such as when he merges with the Leveler and also takes control of it once he scares off its human operators. As stated by Magi Lune, Hexxus can rain down his poison which presumably is his deadliest ability, for Magi states that during his first rampage, the impressive forest was "nearly destroyed and many lives were lost".

Aside from those abilities, Hexxus also seems to have some level of omniscience or omnipresence. Because as is hinted many times in his song "Toxic Love", it seems that Hexxus was still fully aware of how much humans and civilization had evolved over the millennia despite being imprisoned for countless years. Thus, he (at least partially) understood the concept of machines, human greed, human work (shifts, breaks, and all) and was aware of human inventions like shopping malls, cocktails, and anything else. Furthermore, he apparently also knew both the voice and even the personality of the lumberjacks' boss when he mimicked him over the intercom. The fact that he is a spirit further adds constructive plausibility to this theory. Indeed, Hexxus himself has stated that he "sees the world and all the creatures in it".

He is an immortal spirit, therefore he will never die of old age and cannot be killed. The only way that he can be defeated is sealing him in a tree, and he can never escape without outside help while being trapped once. 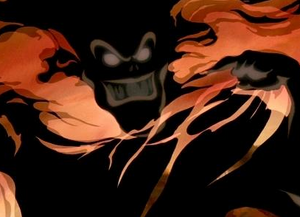 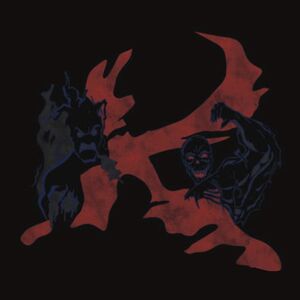 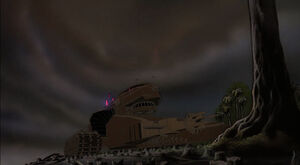 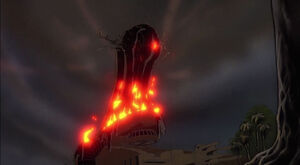 Hexxus rising from the Leveler. 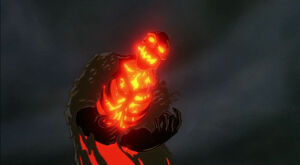 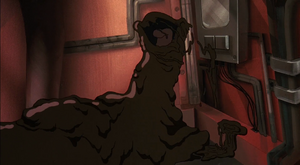 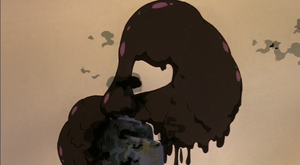 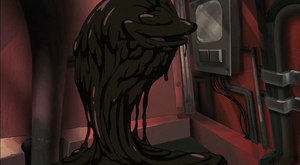 Hexxus preparing to fool the operators of the Leveler. 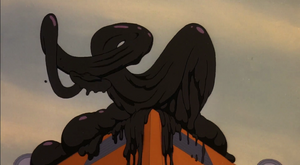 Hexxus slithering around in his first form. 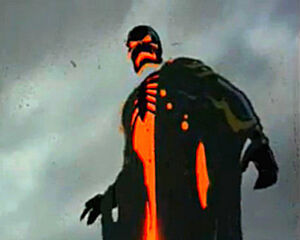 Hexxus' final skeletal form, achieved by absorbing every fuel in the Leveler. 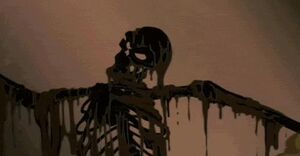 Hexxus' slime taking the form of a skeleton. 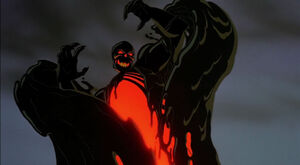 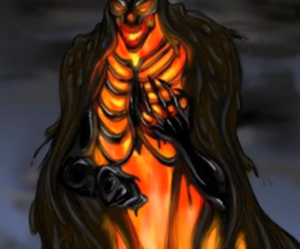 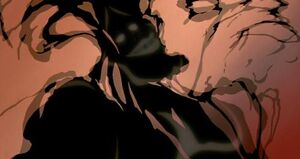 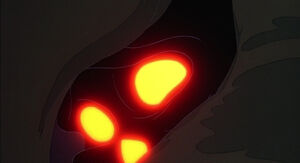 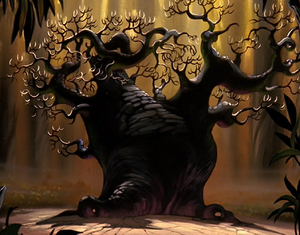 The original tree that Hexxus was imprisoned in. 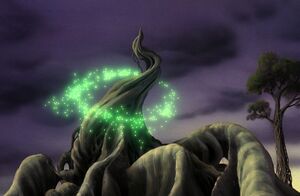 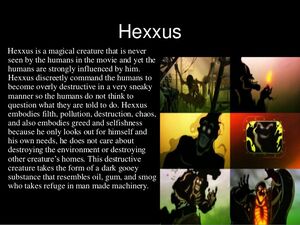 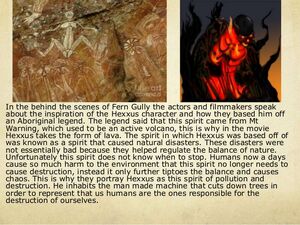 Hexxus' backstory.
Add a photo to this gallery 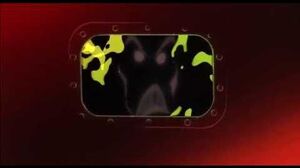 Ferngully - Toxic Love (Extended)
Add a photo to this gallery

Retrieved from "https://villains.fandom.com/wiki/Hexxus?oldid=3573028"
Community content is available under CC-BY-SA unless otherwise noted.