Leader of his own cult called The Union

Enslave all minds into a collective "union" - via mental enslavement.

Hfuhruhurr is a DC comics super-villain, an alien cult leader and primarily an enemy of Superman.

Little is known about Hfuhruhurr other than he is a leader of an extraterrestrial telepathic cult he calls The Union, consisting of multiple brains linked together in a vast telepathic gestalt. The circumstances that prompted him to create the Union are unknown, but he appears to be convinced that he is doing those in the Union a favour, describing himself once as bringing 'the Word' to the 'unenlightened', arguing that belonging to the Union grants eternal life and great knowledge to its members.

Hfuhruhurr would return to plague Superman a second time after this initial defeat and was once again at his nasty habit of merging other people's brains forcibly and creating a gestalt entity known as Eon from his latest victims' enslaved minds - a living avatar of his "perfect" Union. While Eon would fight fearsomely against Superman the entity soon began to see how Superman was not the true enemy, he explained that he was not against the idea of the Union as a concept but rather the terrible means by which Hfuhruhurr was creating it : after the Union became convinced that Hfuhruhurr had no true care for anyone save himself and rebelled against him.

After Eon promised to keep Hfuhruhurr imprisoned for his crimes Superman allowed the new Union to exist in peace, providing they would only take willing minds from now on - promising he would return if they broke this promise. 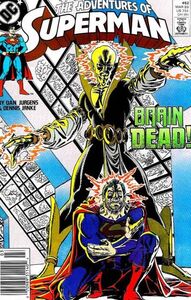