Promoting Moses to a drug dealer by making him sell his drugs (formely) (failed).

Kill Moses and his gang for crashing his car (failed).
Survive the alien invasion (failed).
Kill anyone who gets in his way (failed).

Hi, Hatz is the secondary antagonist of the 2011 sci-fi/comedy film, Attack The Block. He is an evil, ruthless, manipulative, and xenophobic gangster who wants revenge on Moses for crashing his car.

He was portrayed by Jumayn Hunter.

Hi, Hatz was a local gangster in London and Ron's boss. He was asked by both Moses and Ron to keep an alien in his weed room. Later on, Moses accidentally crashes into Hi Hatz's car while outrunning the alien invasion. Angered, Hatz attempts to kill them, but instead murders an alien that murdered his henchman, the gang then escapes. Being incredibly petty, Hatz sought to kill Moses and completely ignored the threat poses by the aliens.

Hatz and his gang soon get to the Wyndham Tower where Moses' gang is and start firing their firearms but miss each shot. The gang escapes once again but one of the alien creatures attacks Hatz and his men and trap them in an elevator, killing the two henchmen violently but Hatz surprisingly survives and leaves the blood-covered elevator.

When Moses and his gang make it to Ron's flat, Hatz was already there waiting for them, holding Ron hostage at gunpoint in his flat. After irrationally blaming Moses for the alien invasion, Moses tells him to look behind him since aliens are behind him and ready to attack him. Hatz refuses at first but hears their growls, he turns around and then the gang once again escapes from Hatz as the aliens attack him. Instead of using his gun to shoot the alien, he foolishly tries to shoot at Moses's gang out of pointless pettiness. Hatz finally meets his demise as his jaw is ripped off by them, finally killing him.

In the movie, the gang leader Hi Hatz represented his gang colour as he wore a blue hat and his henchman wore a blue shirt and a blue hat too but the movie haven't shown the full details about his gang.

Hi, Hatz is a xenophobic, sadistic and vicious gangster who enjoys rap music and even sings his own song called "Get that Snitch" which he occasionally sings. Hatz also hates anyone who crosses him, no matter how young they are, planning to murder whoever crosses him. He even goes to extremely quantitative measures in order to kill whoever crosses him, ignoring the fact there is an alien invasion and killing Moses in his priority instead of survival making him somewhat incredibly outlandish, foolish, and petty. 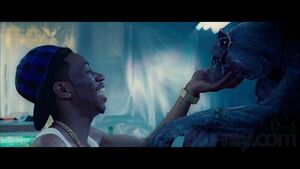 Hi Hatz threatening to hurt Moses and the gang. 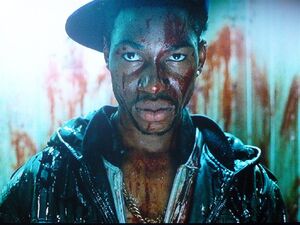 Hi-Hatz covered with blood after being attacked by the aliens in the elevator.

Hi Hatz before he meets his demise. 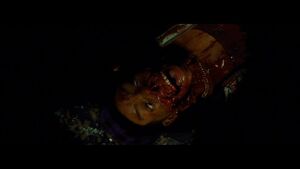 Hi Hatz's death.
Add a photo to this gallery
Retrieved from "https://villains.fandom.com/wiki/Hi_Hatz?oldid=4240150"
Community content is available under CC-BY-SA unless otherwise noted.