Hibachi is a recurring antagonist from the DonPachi series, acting as the final boss/true final boss in all games. Hibachi is a bee-shaped robot, created by Colonel Schwarlitz Longhener (alternatively called Longhena) to be the ultimate killing machine. Its primary goal is to exterminate humanity, so that Longhener could recreate it upon his image of perfection.

Being a robot, Hibachi only follows its original programming. It is capable of self-repairing, the reason it has come time-to-time again to terrorize humanity even centuries after Longhener's demise. It usually appears in a gigantic containment unit resembling a massive bee before it emerges from the wreckage of said container as a much smaller bee in flames.

Hibachi itself was not present in DonPachi, but a prototype called Taisabachi (Colonel Bee in English) was created as the final enemy the Pilot was meant to face as the last part of his training, which involved slaughtering thousands of his comrades to become a super-human pilot. The Pilot destroyed Taisabachi and became an elite member of the DonPachi Corps.

Hibachi made its first true appearance in DoDonPachi as the true final boss. After being deceived by Colonel Schwarlitz Longhener into destroying the lost fleet of the DonPachi Corps, the Pilot set out to take down the mad Colonel as the latter sent out his elite fleet to deal with the former. The Pilot successfully made his way into the DonPachi Corps HQ, where Longhener stated his disgust with the Pilot's actions, and then made to destroy him by piloting Hachi, Hibachi's containment unit, into battle. The Pilot destroyed Hachi, and Longhener piloted Hibachi itself out of the critically damaged bee mecha. The Pilot engaged in a final dogfight with Hibachi, and destroyed the killing machine after a sustained battle, killing Longhener in the process.

Following the tremendous battle, the remaining technology created by the genocidal army Longhener had under his command were transported to the Moon and sealed within an ancient cave network.

A thousand years after the events of DoDonPachi, the war machines on the Moon began to mysteriously reactivate, and the remains of Hibachi were mysteriously stored in a brand-new containment unit, where it was subject to repairs. Upon reactivating itself, Hibachi installed its intelligence into a computer network and took control of the once-dormant machines on the Moon. Breaking out of the caves, Hibachi's automated army attacked the defenseless colony of Lunapolis, the sole settlement on the Moon. Hastily responding to the crisis, a new incarnation of the DonPachi Corps was assembled, and they sent a lone Pilot accompanied by an Element Doll (whether this be Shotia, Leinyan or EXY is up to the player) to drive away the mechanized hordes controlled by Hibachi.

After destroying its four most powerful machines (Suzaku, Byakko, Genbu and Seiryu), The Pilot and his Element Doll eventually tracked Hibachi itself down to the cave network and confronted it within its new containment unit, Koryu, which immediately attacked and even attempted to escape via jets. After the destruction of Koryu, Hibachi unleashed itself and attacked. Having upgraded since its last outing thousands of years ago, it unleashed devastating barrages upon its foe, hoping to overwhelm the Pliot and his Element Doll with neverending volleys of firepower. Nevertheless, Hibachi was once again destroyed, and its computer network shut down.

It was still a mystery as to why Hibachi came back on its own, or why any of the old DonPachi machines had reactivated... 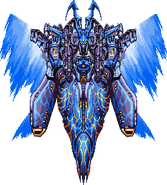 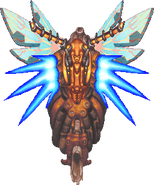 Hibachi's final, humanoid form from DoDonPachi Resurrection
Add a photo to this gallery

Retrieved from "https://villains.fandom.com/wiki/Hibachi?oldid=3905554"
Community content is available under CC-BY-SA unless otherwise noted.