Gaining power that he lost

Etu Ilu, better known as the Hidden One, is the main antagonist of the third season of Sleepy Hollow. He is a Sumerian God and is Pandora's master and consort. He is also the one who gave Pandora her box.

He is portrayed by Peter Mensah, who also portrayed Qovas in Agents of S.H.I.E.L.D and Predaking from Transformers: Prime.

The Hidden One is the person that Jenny Mills saw when the Shard of Anubis was absorbed into her skin. He appeared in her dream and her skin starting glowing orange and her eyes turned white. He appears as a dark-skinned, bald man in a hood. It was discovered by Ichabod, Abbie, and Joe that he is in fact an Ancient Sumerian god.

He appears to be romantically involved with Pandora, whom he gave a special box said to contain all the evil in the world. However, it is revealed that he does not care Pandora at all, and all of his so-called "love" and "care" are all ruse and nothing more. Soon, the Hidden reveals his true nature, after braking free, of being ungrateful, selfish and horrid. He is thankless to Pandora for releasing him and tortures her sadistically, just like how Moloch treated Henry Parrish even after so many things were done for him. He also expresses digust at the notion of love and other human emotions, viewing them as a form of weakness. Pandora is clearly intimidated by him and knows very well that even in his weakened state, he is more powerful than she is.

The Hidden One aims to rule the Earth and it's implied that he might have attempted to do so in the past. In addition, while being semi-omnipotent, he admits that omnipotence is not the same as having wisdom. 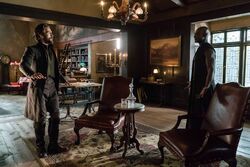 Hidden One vs. Ichabod 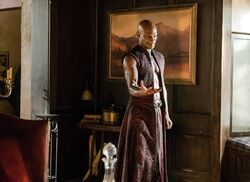