Mortal Kombat: Defenders of the Realm

Hideyoshi is Shao Kahn's deadliest warrior, one of his Kahn Guards, and a minor antagonist in Mortal Kombat: Defenders of the Realm, being featured in the episode "Amends".

Hideyoshi is a masked and heavily armored warrior wielding many weapons, including a whip, katana, staff, and halberd.

His height varies depending on the scene but is mostly depicted as being gigantic, towering over everyone. He has pale skin and completely empty white eyes.

Hideyoshi's past is a mystery, but he was at some point recruited by Shao Kahn in Outworld's past and became infamous enough to be regarded as his mightiest warrior.

He first appears emerging out of a portal, attacking Raiden's Earthrealm warriors. They are easily dealt with, but just before Hideyoshi can claim victory, Kabal makes a swift entrance and delivers two powerful kicks that knock Hideyoshi back into the portal. He reappeared later allied with Kano and his fellow Black Dragon criminals. They attack Kabal before his new allies can arrive but they are defeated and knocked back to Outworld through a portal.

Hideyoshi is never seen ever again afterwards, but it can be assumed that he suffered an unfortunate fate at the hands of his master, Shao Kahn, for his failure.

As one of Shao Kahn's most powerful underlings, Hideyoshi is able to match and defeat many of Earthrealm's warriors, including powerhouses like Jax and skilled martial artists like Liu Kang. His great size makes him very physically imposing, able to shatter the ground and create large cracks without much effort, and the mass that comes with his size allows him to stay in the ground when defending himself from attacks that normally send opponents flying in the air. In spite of his size, however, he is very fast, able to catch the speedster Kabal off-guard.

He is highly skilled with a great variety of weapons, and due to his status has possibly lived for a very long time, likely in the thousands of years, making him a very experienced soldier. 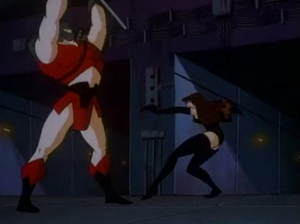 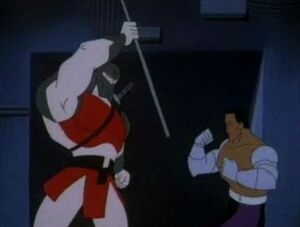 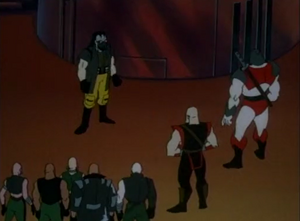 Hideyoshi alongside Kano and the Black Dragons.