Hideyoshi Toyotomi is the villain and first playable in Sengoku Basara 2. In history, he was a retainer of Nobunaga Oda, and united Japan after him.

In Sengoku Basara 2, Hideyoshi is a rival of Nobunaga and fights alongside his vassal Hanbei Takenaka.

Hideyoshi was born a normal, if big, man who was friends with Keiji Maeda. They were good friends and spend their days by either pulling pranks or defending the locals from bandits. Hideyoshi also used to fall in love with a woman named Nene. However, everything changed after one encounter with Hisahide Matsunaga. Hideyoshi overestimated his own strength and tried to investigate Hisahide's strength, but his plan backfired and he was captured and put through humiliations displaying his weakness. When Keiji rescued him, Hideyoshi came to a realization that strength meant everything and he started harboring an ambition to create a powerful country where people can stand for themselves and prosper. Unfortunately, due to his humiliation by Hisahide, Hideyoshi became drunk in getting more power, and was willing to become a ruthless warlord, even sacrificing his love by personally killing Nene; straining his relationship with Keiji, to achieve his ambition. What differentiated Hideyoshi with Nobunaga was that despite cruel, Hideyoshi still showed charisma and care to his own army. This clashing point of view made them rivals.

Hideyoshi took advantage of Nobunaga's assassination by Mitsuhide Akechi to eventually position himself as Japan's most powerful. Unfortunately, before his dream came to fruition, his vassal Ieyasu Tokugawa revolted and killed Hideyoshi.

Hideyoshi is a big slow-moving character, but sometimes his strikes come out quick. He is also the only character specializing in grappling special moves, likening him to another Capcom characters Zangief from Street Fighter and Mike Haggar from Final Fight. 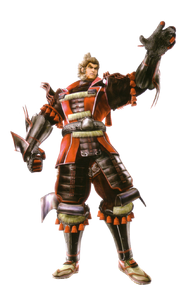 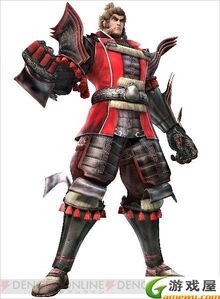 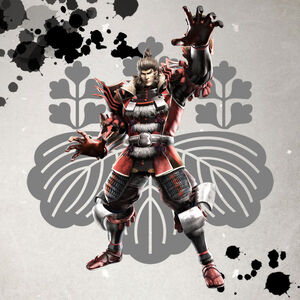 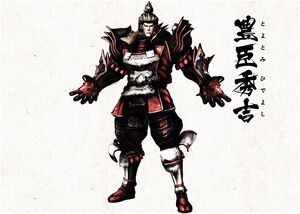 Retrieved from "https://villains.fandom.com/wiki/Hideyoshi_Toyotomi_(Sengoku_BASARA)?oldid=3537479"
Community content is available under CC-BY-SA unless otherwise noted.