Master of the Evil Eye

Hiei (in Japanese: 飛影, "Flying Shadow"), also known as Jaganshi Hiei (Jaganshi is an epithet meaning "Master of the Evil Eye") is a male fire demon born to a race of female Ice Maidens and a main character in the manga/anime series Yu Yu Hakusho.

The Ice Maidens reproduce every 100 years asexually, always giving birth to a female. A male child is born only if the Maiden had sex with a male, which is forbidden in their society. Hiei who is once known as Imiko" ("cursed child"), was born as one of the twin children of the Ice Maiden Hina. As her children were born, Hina wept two tears which crystallized and were given to the babies. Hiei was thrown from the floating Ice Domain by Hina's closest friend Rie, to his supposed doom. He managed to survive, though, and grew up in the wilderness where he developed a thirst for killing. The only times he found peace were while looking at the tear-gem from his mother. He later decided to find the ice domain in order to take revenge on the women who cast him out. He loses his tear-gem during a battle and, realizing he must now find the stone as well as the Ice Domain, went to the Osteopath Shigure and has the Evil Eye (Jagan in Japanese, referred to as the Jagan Eye in the English anime dub) implanted in his forehead which gives him many powers, including hypnosis, telepathy, and clairvoyance or remote viewing.

Even with the Jagan Hiei cannot find his tear stone, though he easily finds the Ice Maidens' glacier home. When he gets there he finds his mother's grave and his lust for revenge fades. He is told his twin sister has run away and decides to search for her as well. Hiei is an expert with a Katana due to the environment in which he grew up. He also has superhuman speed and can produce and control fire. During the Dark Tournament he taps into the unruly fires of hell, known as the Dark Flame of the Overlord, or in the English dub, "Dragon of the Darkness Flame", which he eventually masters. At the end of the manga, he is assigned as one of the guardians of the portals between the human and demons realms. 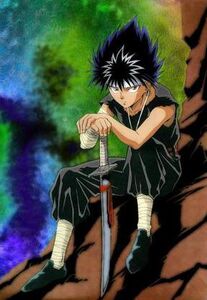 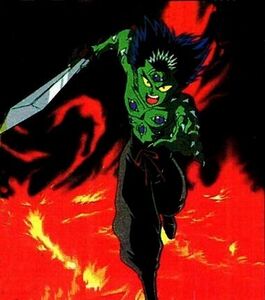 Retrieved from "https://villains.fandom.com/wiki/Hiei?oldid=4273061"
Community content is available under CC-BY-SA unless otherwise noted.