The Hige Hige Bandits (spelled Hige-Hige Bandits differently), sometimes called "Higehige-dan", are an army of recurring enemies from the Bomberman series. They are the main group of mooks in Bomberman Jetters and their leaders are Mujoe and Bagura.

They also had roles in the video game Bomberman Generation as well as cameos in Bomberman Land for the Wii.

They have similar group rival to their own called the Chige Chige Bandits.

They wear black costumes and have two antennas on their head. They have large eyes and a large mouth, but they lack a visible nose. The only word they are ever heard speaking is "Hige" or some variation of it. Chige-Chige Bandits.

The word Hige means "humility" in Japanese. The Bandits often run around cluelessly and make many careless mistakes because of their simple-minded nature. In many cases, they are the reason that Mujoe loses to the Jetters when they confront one another. 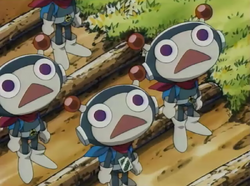 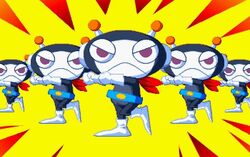 Retrieved from "https://villains.fandom.com/wiki/Hige_Hige_Bandits?oldid=3826014"
Community content is available under CC-BY-SA unless otherwise noted.