The Man in the Golden Mask

The Particle of God that Permeates all Existence
Peter Englert

Founder and Leader of the Homo Demens

Maintain the independence of the Central Knot City.
Destroy the Bridges Company.
Prove there is no connections available between people.
Summon an Extinction Entity to cause the 6th extinction (all failed).

Higgs Monaghan (also known as The Man in the Golden Mask) is the main antagonist of the 2019 sci-fi open world action adventure video game by Hideo Kojima, Death Stranding.

He is the supreme leader and a part of the militant separist organization known as the Homo Demens, which is bent on seeking maintain the independence of Edge Knot City, and, they oppose the United Cities of America as well as the Porters, mainly Sam Porter-Bridges who works for the company Bridges.

Claiming to understand the truth of the titular Death Stranding event, Higgs is stating it is hard for people to create "connections" as they are unable shaking hands. He also possess the ability of controlling and manifesting a gigantic four-legged Beached Thing, making the cargo delievery man to face a challenge; avoid being eaten to death. In addition, he is also possessing the ability of teleportation.

He was portrayed and voiced by Troy Baker, who also voiced the Joker in Batman: Arkham Origins, Pagan Min in Far Cry 4, Joel in The Last of Us, Revolver Ocelot in Metal Gear Solid V: The Phantom Pain, Magni in God of War, and many others.

Higgs is coming from an entirely unknown origin, as nothing is truly known of his last name or even if his name really is Higgs.

However, it is known that in some point following the cataclysmic event of the Death Stranding, he went to lead the militant separist organization known as the Homo Demens, taking to wear a golden-black mask to control a giant octopus-like Beached Thing he is able to manifest in addition to his capability to teleport himself.

Eventually, his plans temporarily succeed until he is defeated, seemingly to death, by Sam after a battle with him nearby the Edge Knot City.

Ever since that he was existing, Higgs is mostly known as an extremely intelligent, dark, cold, manipulative and often destructive individual, whose seeking nothing but maintaining the independence of Edge Knot City, believing that the United Cities of America and the Bridges Company led by Die-Hardman, is doing anything wrong and causes further damage to the rest of the world like it has not suffered enough before, that is why he is always making such dark usage in the Homo Dems against Bridges and the UCCA.

Although he is an anti-villain, Higgs is proven to be a gifted and powerful anarchist, who would use any kinds of murderous or savage actions to carry out his actions, and, he is even a ruthless sadist as he is manifesting his Beached-Thing in order to make the cargo man facing a challenge; avoid being eaten alive to death. He is claiming of knowing the titular Death Stranding event ,and, attempts manipulating people into joining him to "know the truth", doing so to Sam.

Additionally, Higgs is shown to be an extremely flamboyant, charismatic, and sarcastic when speaking with Sam, taunting Sam by asking "Sound like fun?" after throwing a perilous challenge the deliveryman's way, with also being shown as an extremely smug and prideful toward his work and his actions, evidenced when he brags about his connection to the "other side".

More evidence to his ruthless sadistic nature is shown, as he is capturing Bridget and forcefully licks Fragile's face, in addition to being a near-predator-like individual. 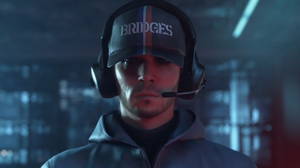 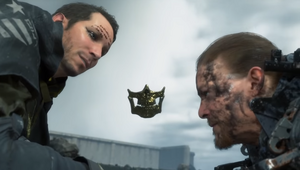 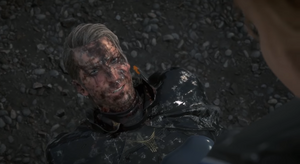 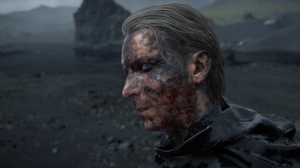 Retrieved from "https://villains.fandom.com/wiki/Higgs?oldid=4153660"
Community content is available under CC-BY-SA unless otherwise noted.