High-ranked member of the Hive

Head of the MIB facility in the UK (disgraced)

Deceiving other people and living beings or even aliens from the outer space before utilizing his plans against them.

Leading MIB operations.
Using the MIB forces for his own agenda.

Recruit Molly as an MIB agent and have her assist Agent H in order get the superweapon (succeeded).
Reshape the universe and conquer it for the Hive and exterminate whoever is not an affiliate to his faction.
Open a door to planet Earth so the Hive can take over the planet and destroy all of humanity.
Have Agent H and Molly find the last piece of the superweapon so he can finish his agenda and kill them both (all failed).

High-T is the main antagonist of the 2019 sci-fi film Men In Black: International.

He is an ambitious high-ranking member of the Hive who started out as the corrupt and no-nonsense head of the MIB branch within the United Kingdom, but was infected and converted into a member of the evil alien race.

He was portrayed by Liam Neeson, who also played Ra's al Ghul in Batman Begins, Bad Cop in The Lego Movie franchise, Harry Rawlings in Widows, Norvirus Raccoon in The Nut Job, Phango in Khumba, Clinch Leatherwood in A Million Ways to Die in the West, and himself in Family Guy.

High-T first appeared with H in Paris. After subduing the Hive, High-T erased H's memory and made it look like he was an official hero.

High-T originally introduces himself to Molly and recruits her as an agent for the MIB. He tells her that he expects from her great things. He later researches the suspicious alien individual who attempted to destroy the world with a superweapon. One of his loyal agents by the name of "C" has announced that his impression is that his rival, Agent H is the treacherous alien warlord. C then tries to neuralyze H, but Molly convinces T that he should not be neuralyzed, and that she can tell the truth. She insists to T that if the alien was caught in an area where only MIB agents were operating, then the traitor must be someone working for the MIB, or worse, it could be one of the MIB's top agents.

High-T orders C to take care of it, and Molly to help him to find and build a weapon against the alien scums. He then gets upset at Agent H for being irresponsible and suspicious in the recent times, even stating that he had lost one of his assisting agents during previous operations. H tells him that he will not fail this time. High-T later sends Molly and Agent H to retrieve and bring him the last piece of the superweapon which Molly has started building, which they successfully do, so it can launch a portal to the Hive base in the outer space so the aliens from Hive can take over the planet and occupy Earth, unknowingly to them and the rest of the MIB agents. He then kills two alien twins who tried to invade planet Earth. The last piece of the superweapon is then returned to the MIB UK headquarters, and High-T tells everyone to make sure that it remains securely stored away. He then hints about his next move (which is to launch the portal by using the superweapon) as he tells Molly that her heroic acts will never last.

He later goes to test the weapon and deletes all the evidence that there was an alien traitor among them in order to maintain his secrets. However, Molly and H confront him. He then reveals his ambitious scheme to Molly and Agent H, telling them that they have created a history for the Hive all along, which he had been converted to years before, and that now that he can shoot a portal to the outer space so the Hive can come and take over Earth, there is no stopping him from killing all of the human beings. He tells them that now every planet will deform, starting with Earth itself. He then reveals to H that he was just another tool for his ultimate scheme and that he never had feelings for him, as High-T even sarcastically remarks that he was "always like a son to him".

High-T then reveals his true alien form to Molly and H, and he ruthlessly fights them with no remorse, and only with cold blood. He then grabs H and as Molly tries to save him from being mutilated by the ruthless alien warlord, T grabs her and throws her into the portal, so the Hive members will kill her when she gets to the other side. However, Pawny, a small alien and ally to both Molly and Agent H has her taken back to Earth, allowing her to grab the superweapon and shoot both T and the portal, thus causing the ambitious High-T and his portal to disintegrate and never to return. Despite his treachery and awful actions, the agents were still sad over the loss of High-T, especially Agent H as he was still like a father before his betrayal. Molly and Agent H are then both congratulated for their hard work.

Pretending to be the head of the MIB force in the United Kingdom at first, he was revealed to be one of the cruelest threats that the MIB have ever crossed paths with. He is vicious, calculating, manipulative, cunning and genocidal, as he intends to take over the universe for the Hive, not even having remorse for a human being who he would consider as a son-like figure, just as part of his manipulations and schemes.

Due to being infected by the Hive, T is a remorseless and heartless alien who seeks only power and corruption, and is obsessed with the Hive taking over the universe with his own weaponry and inventions. He was willing to wipe out the entire human populace as well as destroy any other opposing alien being in the universe. He might even be considered as one of the most cruel, vicious and ruthless villains of the MIB franchise, along with Boris the Animal, Vangus and Alpha, as he was personally bent on reshaping the universe and he was ultimately cunning and extremely aggressive despite having no remorse. Also, he could even be considered corrupt among the human society. He was willing to mutilate anyone who stands in his way, and he developed an obsession with Agent H following his path until he had no use for him anymore. Fortunately, H was able to reach out to him, and he was able to respond, hinting that his humanity wasn't entirely gone. 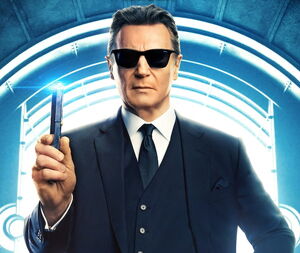 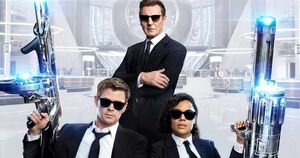 High-T with the two protagonists of the film, Molly and Agent H. 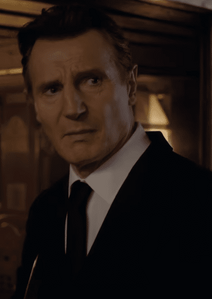 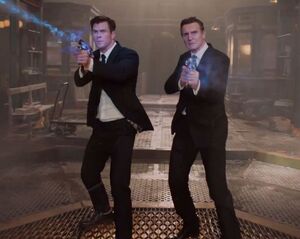 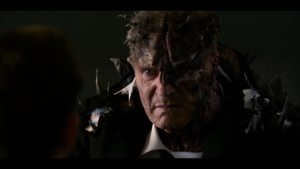 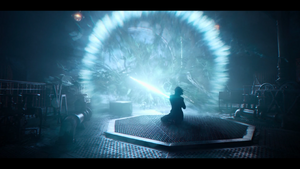