The High Evolutionary is an antagonist from Marvel Comics. He is a mad scientist wanting to make the perfect evolved human by mixing animal and human DNA together. He first appeared in The Mighty Thor #133 from 1966.

Dr. Wyndham was born in Manchester and study at Oxford University during the 1930s. He was inspired by Nathaniel Essex aka Mr. Sinster and started to attempt evolving rats with a machine he made called the "Genetic Accelerator". He succeeds by his pet dalmatian "Dempsey" with the brain of a chimpanzee and with a humanoid appearance.  While attending a conference Geneva, He met the Inhumans who handed him blueprints for cranking genetic codes. He joins a partnership with Johnathon Drew (the Farther of Spider-Woman).

As  Dr. Wyndham, he describes with both brown eye and hair but as an evolved human he describes a violent red robotic with and sliver and the hip and legs and has this crown and bright yellow eyes.

The High Evolutionary has knowledge of multiple types of science, like biology, medicine, physics, etc.

He also has a superpower like human strength and durability, manipulating matter at a subatomic level, energy manipulation and projection, cosmic awareness, precognition, telepathy, telekinesis, extra-dimensional travel, and size alteration. 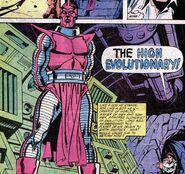 Retrieved from "https://villains.fandom.com/wiki/High_Evolutionary?oldid=3401607"
Community content is available under CC-BY-SA unless otherwise noted.