High Priest (The Rising of the Shield Hero)

Leader of the Church of the Three Heroes

Eliminate Naofumi and later the other three heroes to replace them.

Take over Melromarc and kill the royal family (both failed).

At first, Balamus seems to be a peaceful and kind individual when Naofumi first met him. Deep inside, however, he has a twisted and fanatic personality alongside a deeply routed God Complex. He will preach and believe anything for his convenience and secure the Church of the Three Heroes' influence.

When his religion begins to be questioned, Balamus begins to claim that the heroes to be imposters and show his true nature towards them, seeing them as nobody but mere titles at best. He reveals himself to be a fanatic just like his staunch followers. He was willing to do anything to defend his preaching, even if it means framing the Three Heroes his religion worships. He would make ambitious plans that would heavily affect the kingdom.

The High Priest used his deep connections in the nation to do away with any opposing authority in the kingdom. He was so narrow-minded that he calls all of his actions "the will of God". He also claims that his followers who died in the fight against the Shield Hero to be gifted by being able to go to Heaven. After seeing his followers constantly rising from the defeat and pain, Naofumi suspects the High Priest of using some sort of brainwashing magic on them and using them for his convenience. It means that the High Priest is not beyond using underhanded and petty strategies to gain victory.

When wielding the replica of the legendary weapons, the High Priest proclaimed himself to be God and anyone opposing him as evil, revealing himself to be a merely delusional hypocrite with a fervent sense of twisted justice. This belief even extended as far as him planning to make the Shield Hero a evil deity in his religion as part of a pact with the king, who hated the Shield Hero of the previous generation for being worshipped by demihumans

In the manga, Balamus is even worse and more brutal than his counterparts in the original web novels. He attacks a village that was already devastated by the acts of its racist mayor who unleashed a monster on the town because he gets called out on his hypocrisy by Naofumi. 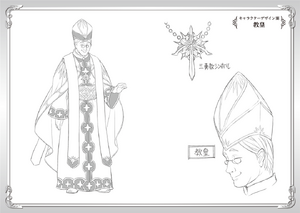 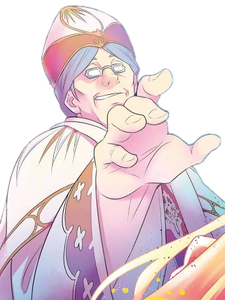 High Priest in the manga. 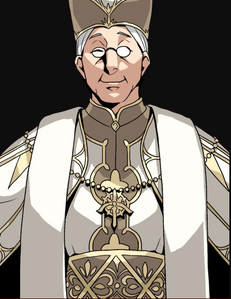 High Priest in the light novel.