High Priest Darom is the leader of the three Gorgom High Priests and the secondary antagonist in Kamen Rider Black.

He was portrayed by Shōzō Iizuka.

After losing the power of the "Stone of Heaven" within him, he assumes his Grand Mutant form, becoming Grand Mutant Darom. Following Baraom and Bishium's death, Darom attacked the ex-Shonen Warriors until Kohtaro arrives and transforms into Kamen Rider BLACK and fights Darom until Shadow Moon arrives.

Due to a change in history caused by Ankh leaving an O Medalbehind in 1971, Shocker achieved its goal of world dominion with their new kaijin Shocker Greeed, which defeated the Double Riders. Thus members from the various groups that would have manifested in the normal timeline after Shocker's destruction instead would up serving Shocker. High Priest Darom was among the many monsters who were part of the this alliance.

After history was rewritten by Shocker's History Modifying Machine, the evil organization was able to once more rule the world by having Kamen Rider 3 kill of the Double Riders in 1973. Along with many other monsters, High Priest Darom again entered service to the organization. During the final battle against the Kamen Riders, High Priest Darom was destroyed by Super-1's Spark Kick.

High Priest Darom is capable of manipulating people just by pointing at them. In his Grand Mutant form, Darom can discharge laser beams from his fingers and use his feelers as ropes. 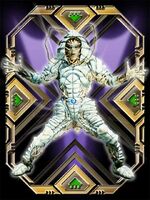