" Run, Pharaoh, RUN! Follow MY rules of fate...into the void of shadows! "

Destroy the Pharaoh and resurrect Zorc Necrophades in the present

Power Hungry
The High Priest of Darkness is Akhenaden's dark side, formed when he formed a pact with Zorc Necrophades. He is an arch-enemy to the Pharaoh and one of the final antagonists in Yu-Gi-Oh!.

Thousands of years ago, Akhenaden grew jealous of his nephew the Pharaoh, believing that his own son Seto was more deserving. He then set about stealing the Millennium Items from the Pharaoh and his priests and used them to summon the dark god Zorc Necrophades.

Zorc Necrophades bestowed upon Akhenaden a portion of his being, creating the High Priest of Darkness. The High Priest set about storming the kingdom. He summoned a legion of undead soldiers to fight the Pharaoh's army, then slipped away with Seto while the Pharaoh fought the dark god.

In the present day, Yugi Muto would be the first to reassemble the Millennium pendant, becomig the host to the Pharaoh, while unknowingly reawakening the High Priest, who quietly planned his rematch with the Pharaoh. When Dark Bakura sealed a portion of himself into the pendant, the two formed an alliance.

After Dark Yugi retrieved the three Egyptian God Cards and presented them to the stone tablet that documented his past life, he was sent into the World of Memories to live out his previous life as Pharaoh. While contesting with Bakura, King of Thieves, he failed to notice that the high priest Akhenaden had earlier encountered Bakura, who revealed that he knew the grisly origins of the Millennium Items. After attacking Akhenaden, Bakura escapes.

Aknadin served as his brother, King Akhenaken’s advisor. In order to defeat their enemies, Aknadin abandoned his wife and young son Seto. He had the villagers of Kul Elna massacred and used their essence in a ritual to forge the millennium items, but he also woke up Zorc the Dark One. Aknadin warded Zorc off with the power of the Millenium items. Akanadin and the kings court fended off the invaders with the power of the millennium items.

Years later, Aknadin would be reunited with Seto when he joined the Pharoh’s court. Aknadin never told Seto they were father and son, but became a mentor to him. Years later, Thief King Bakura would corrupt Akandin’s soul and turn against his nephew. Aknadin determines that Seto should be the Pharoh. To this end, Akandin wanted to harness the power of the villagers. One of them included a woman named Kisara, who had the power of the Blue Eyes White Dragon.

When the Pharoh’s spirit was reliving his past, Aknadin was aided by Yami Bakura, who served as a game master. He used an hourglass to freeze time and allow Aknadin to take the Millenum items. Aknadin made a deal with Zorc where he revealed to a stunned Seto that he was his father and wanted him to be king. Zorc transformed Aknadin into the Dark Priest (Great Shadow Magus in the Dub).

After kidnapping Seto, Aknadin revealed his plan to harvest the power of thee Blue Eyes White Dragon from Kisara. Seto refuses to take her power, so Aknadin summoned a shadow monster to fight. Kisara in turn summoned the Blue Eyes White Dragon. Aknadin attacked Seto and Kisara took the hit, killing her. Seto retaliated by stabbing Aknadin, who then turned himself into energy and possessed Seto. He then fought the Pharoh in Seto’s body until the Blue Eyes White Dragon appeared in Seto’s mind and destroyed Aknadin, freeing Seto from his control. Then the Pharoh heads into the afterlife, a redeemed Aknadin is seen, looking how he did when he had first forged the Millennium items.

Akandin was original seen as kind and elderly man, who had built a reputation on giving mercy to criminals. He was a mentor and friend to his son Seto, but was not afraid to act like a father to him (even though Seto didn’t know he was). He scolded Seto when he captured a bunch of villagers, fearing he would be would be going down the same dark path he did.

After Thief King Bakura liberated the darkness in Aknadin’s heart, he became more diabolical and sadistic. He took great pleasure in watching others fight for his own personal gain as he sought to continue Seto’s plan in harnessing the energy of prisoners. He became heartless and cruel toward others, losing all traces of the man he had one been, even plotting to kill his own nephew.

The one thing that never changed was Aknadin’s love for Seto. He showed great concern for Seto when he put his life at risk and even though it looked like he was going to kill him, he claimed he only did it as a way to kill Kisara. Anakdin’s love for Seto has become twisted by the darkness in him to the point where he would possess him and control him himself to make him do his bidding and join him.

The original siege on the kingdom

The High Priest, unmasked and decrepit

The High Priest presides over the world of memories 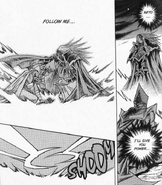 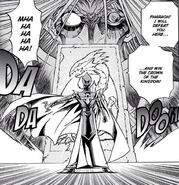 Death of the High Priest of Darkness

The High Priest of Darkness’s face in the anime.

Akandin stands over Seto in his mind.
Add a photo to this gallery

Retrieved from "https://villains.fandom.com/wiki/High_Priest_of_Darkness_Akhenaden?oldid=4377222"
Community content is available under CC-BY-SA unless otherwise noted.