Chief priestess of the Cult of Aku

Mistress of the Daughters of Aku

Training her daughters.
Ruling over her followers.

Worship, obey and follow the desires and will of Aku.

Kill Samurai Jack to win Aku's favor.
Kill Ashi for going against her (all failed).

The High Priestess is the secondary antagonist of the fifth and final season of Samurai Jack. She is the nameless masked leader of the Cult of Aku and the mother-in-law of Samurai Jack as well as the mother and mistress of the Daughters of Aku who lives to serve her god Aku.

She was voiced by Grey DeLisle, who also played Vicky in the Fairy Odd Parents, Azula in Avatar: The Last Airbender, Duchess in Foster's Home for Imaginary Friends, Asajj Ventress in Genndy Tartakovsky's Star Wars: Clone Wars, and Jubileus in Bayonetta.

The appearance of the High Priestess was never fully seen, but a silhouette can be discerned when she is giving birth to her daughters during a ceremony. She was briefly seen in the back when she was getting dressed into her outfit - she appears to be slim and has long black hair. Like the other cultists, she wears a long black robe, with a pink female mask and a head covering with six Aku-like horns—unlike the usual four that regular cult members have (this could possibly signify her role as the leader of the cult).

Judging from silhouettes and taking into consideration how Ashi and her sisters do not resemble Aku (who's revealed to be their biological father in the second-to-last episode of the final season), the High Priestess seems to resemble her daughters (albeit with longer hair).

The High Priestess is a cruel, unfeeling, ruthless, merciless, and utterly remorseless woman, who punishes those who make mistakes in a dangerous and violent manner, including her own daughters. She puts her children through intense and harsh training, even at a young age, and breeds them into becoming assassins and servants for the demon Aku.

She has no genuine concern for her children, and the closest thing to affection that she ever displays is to Ashi, whom she refers to as "My sweet little Ashi" during training. That said, it's likely she would pretend love or affection if necessary to make her daughters focus on the goals she imposed on them. She only shows true love towards her husband Aku, who is worshiped as a god by both the High Priestess and her followers in the Cult of Aku. She lives to serve Aku and puts her daughters through assassin training as a result, explaining how the weak have no place with Aku.

Overall, the High Priestess is nothing but a heartless monster who lacks any basic humanity, and has no concern or value for her own blood. It should be noted that unlike Aku who is the embodiment of all evil and only knows how to be evil, and his minions who are robots that are only programed to be evil, she is a human fully capable of understanding right and wrong and chooses to do what is wrong.

In "Episode XCII", the High Priestess showed up during a ceremony conducted by the Cult of Aku, an all-female cult of devout worshipers of Aku. There, she gave birth to seven girls and put them through years of hard and intense training to make them into strong ninja assassins who will hopefully track down and kill Samurai Jack, Aku's long-time rival and enemy. After training them, she made them kill the other cultists and gave them white female masks and weapons, and sends them out into the world to kill the samurai.

In "Episode XCV", although the High Priestess didn't appear physically, Ashi has a dream about her while unconscious, appearing as a nightmarish face demanding her to kill Jack. Later, before she can finish off an exhausted Jack, she sees a ladybug pass and remembers the time her mother squished one for "distracting" her from a sparring session, when Jack holds the ladybug he admires it and let it fly away.

In "Episode XCVI", when Ashi joins Samurai Jack, the High Priestess appeared to Ashi during the night as a vision in the moon telling her to kill Jack while he is sleeping, but Ashi denies to do it explaining to her mother that Jack saved her life and wants to know the truth. The High Priestess angered for Ashi's response then tells her that she has failed her.

In "Episode XCVII", during her quest for Jack who previously went missing with the Omen, Ashi approached a waterfall in the forest and there she remembered the time her mother indoctrinated her and her sisters by having them dive into burning ashes, "becoming one with the darkness" and giving them their signature "outfits". The High Priestess then pushed Ashi first into the pit, showing little care of the screams of pain from her daughter. Diving into the river, Ashi spends the rest of the night scrubbing off her ashes, letting her hair down, and creating a new outfit from nearby foliage, finally putting the past behind her.

In "Episode C", The High Priestess is shown in a flashback in which she and her cult are visited by Aku. Aku notices the statue they constructed in his likeness and was impressed by the display. As a reward, he gifted them with a small fragment of himself within a chalice, to which the High Priestess drank shortly afterward. Afterward, the small bit of Aku caused her to become pregnant with Aku's children, thus giving birth to the Daughters of Aku.

In the series finale "Episode CI", after Jack successfully destroyed Aku in the past and Ashi was erased from existence for helping him to succeed in his mission, the High Priestess eventually never became the leader of the also wiped from existence Cult of Aku, as Aku was never there to have them to appreciate him nor to impregnate her with his essence. However, whether the High Priestess and her daughters (with a human father, of course) still exist in the new timeline or not is unclear, although it could be possible that she instead became a loving mother who loved her children as Aku never had any influence on her life. 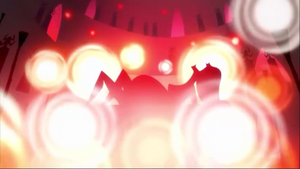 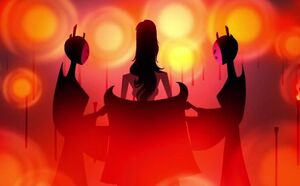 The High Priestess putting her clothes on with the help of 2 cult members. 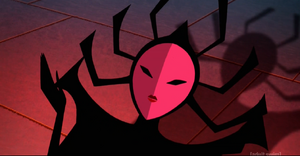 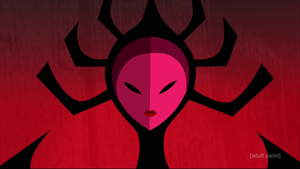 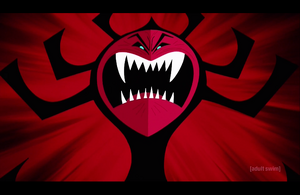 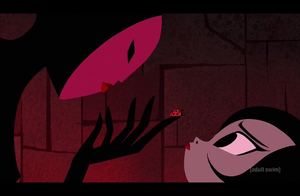 "Ashi. These frivolous distractions are poisons for your mission. They are not part of Aku's order." 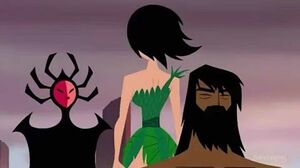 "I knew you would fail us. You were the strongest, but the most unfocused. Always distracted, questioning everything! But all that can change. You can still honor our Lord Father." 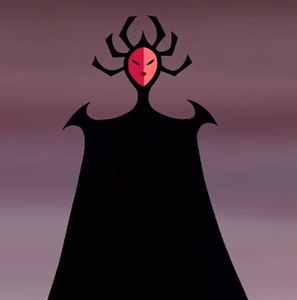 The High Priestess in "Episode XCVIII". 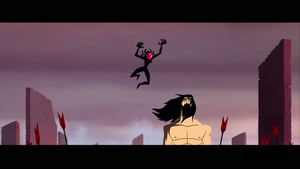 The High Priestess making a last effort to kill Jack. 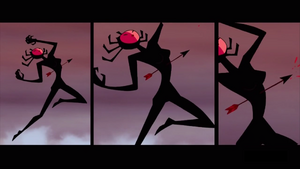 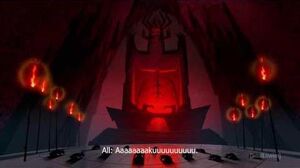 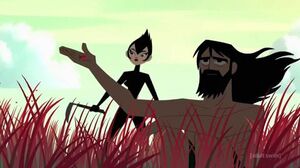 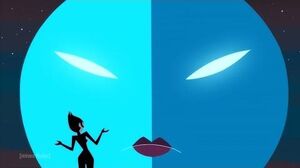 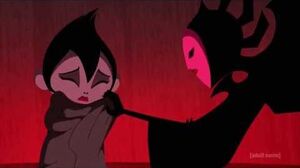 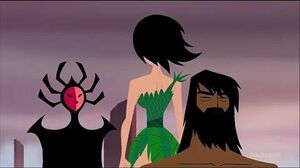 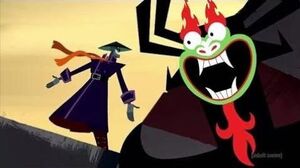