Robotic Mercenary
C-21 Highsinger was a droid bounty hunter that was active during the Clone Wars.

He was a member of the criminal syndicate of bounty hunters that was lead by Boba Fett and was compromised of Latts Razzi, Dengar, Bossk, and Oked. He took part in a job where he was to guard a specific treasure for Otua Blank from the Kage warriors and had extensive modifications to make him a deadly and powerful warrior. He first appeared in Star Wars: The Clone Wars as a one-shot character, but later appeared in the Dark Disciple and the Darth Vader comic series.

During the Clone Wars, Highsinger had joined a group of bounty hunters that was lead by a young and adolescent Boba Fett as part of a mission on the planet of Quarzite. The hunters were later joined by Asajj Ventress - unaware of her true identity - after she killed one of the members on their team. The group was tasked with guarding a subtram which was to be delivered to the Belugan dictator, Otua Blank. Though the trip started easy and smoothly, the group was soon in conflict with the Kage Warriors who ambsuhed the subtram and killed all of the Belugan guards leaving the syndicate as the only source of defense. The Kage Warrios sought after the cargo and Highsinger fought them off to the point that he became one of the last hunters standing while the rest were thrown off the train after being overrun by the warriors. Despite his best efforts however, Highsinger was thrown off the train by the Kage Warriors, though he did manage to survive the fall.

In his absence, Boba was bested by Sodi, who was revealed to have attacked the subtram and wanted the cargo because it contained his sister, Pluma Sodi, who was captured and sent to Oyua Blank to be married off to him as his wife in a forced marriage. Ventress, having suffered many changes in her recent past, defied Fett's orders and allowed the siblings to escape and handed Fett over to Blank instead. She collected the bounty from the warlord and later reunited with the rest of the syndicate where she said that they'd see him again before leaving.

In the second year of the war, Highsinger and other members of Boba Fett's syndicate were frequenting a bar in the lower levels of Coruscant in Level 1313 when they were visited by the undercover Jedi Master, Quinlan Vos, who was dispatched by the Jedi High Council with the task of assassinating the Separatist leader, Count Dooku and partered up with Ventress who also wanted to kill Dooku out of revenge. While present with the bounty hunters, Fett informed Vos that Ventress was hunting a Volpai fugitive named Moregi on Pantora and Vos traveled to the planet to meet up with the rogue Dark Jedi. He managed to capture the fugitive and even managed to win over the support of Ventress in his mission to kill Dooku. Vos and Ventress however, failed to assassinate Dooku and they were captured. After the two of them were captured, Highsinger and the other hunters took part in a mission to rescue Vos on Serenno.

Earlier on, Fett was visited by Chalmun's Cantina on Tatooine by Ventress, who wanted to rescue her partner and lover from Dooku. Highsinger later accompanied his fellow synicate members and Ventress as they boarded the Slave I and traveled back to Serenno. Ventress infiltrated Dooku's palace while Highsinger and his associates staged a diversion and attacked several Separatist vehicles and droids. Dooku was even snared under a net, but they had to let him escape after Vos saved Dooku and revealed his new allegiance.

After the Clone Wars had ended in 19 BBY with the death of the Separatist Council and the destruction of the Jedi Order, the Galactic Republic and the Confederacy of Independent Systems were both dissolved and the were replaced with the Galactic Empire. Highsinger managed to survive the war and was still active during the Galactic Civil War. During the conflict, Highsinger was one of the many bounty hunters that was hired by Darth Vader to rescue Doctor Aphra after she was captured by the Rebel Alliance on Vrogas Vas. 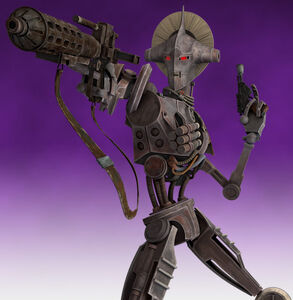