Hilda, also known as Paradox, the leader of the organization Amnesia. She seeks to become a Re-Birth, an existence surpassing that of an In-Birth. She is the main antagonist of Under Night In-Birth.

Hilda is one of the leaders and founders of the Amnesia, she thinks that the Hollow Night need brand new rules and more freedom. She is interested in the Indulgence of Rending and the Autonomic Nerves.

She often says she aims to become a Re-Birth so she can destroy the "old leaders" of the world with her own hands. In her own story, she plans to become a "spear" that will pierce through the Door of Resurrection that lies at the,e bottom of the Abyss.

She is being used by Kuon for the sake of his unknown goals. In the ending of Carmine's story, it is revealed that Kuon had stolen all the equipment needed to become a Re-Birth from Hilda.

Hilda is a young, slim woman with very long blonde hair that goes down to her ankles, and she appears to have heterochromia; her left eye is red and her right eye is grey. She wears a white and black dress, black stockings, and white high heel shoes.

With great ambitions in mind, Hilda appears to be a threat, but in reality, seems to be only a pawn in Kuon's currently unknown plan. She's just 2 years older than Yuzuriha. She possesses a stereotypical noblewoman laugh.

Many characters state that, despite her pompous and arrogant demeanor, she isn't as intelligent as she believes and has a history of getting herself into troublesome situations. She also attempts to recruit many characters to serve her and finds Vatista "adorable".

Hilda's ability Paradox is the EXS of Glittering Haze. This ability makes her able to summon swords from thin air. Apparently the swords Hilda can summon should normally be shining brightly, but now that she has been consuming too much Existence, the swords have corrupted and changed their color to black.

Her weapon is the Dress of Darkness called Masquerade. 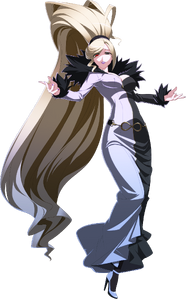