Member of the Russian Mob (formerly)

The unnamed Hillbilly is a minor antagonist in Todd McFarlane's Spawn's Season 2. He is an assassin who was hired by Jason Wynn to kill Terry Fitzgerald. He is a supporting antagonist of the episode "Access Denied".

Nothing is known about the Hillbilly's background, but according to Merrick, he used to work for the Russian mob.

When Wynn finds out that Terry has been getting to close to his secret arms trades, he gets Merrick and hired Leon and a member of a Russian mob to kill Terry. Leon and the Russian man arrives at the building and traps Terry. Merrick tells Leon to head in and she'll be her eyes and ears.

Inside the building, while Terry hacks the computer to find Wynn's secret weapons, he hears Leon and the hillbilly's footsteps and open fire on him.

When Merrick, Leon and the hillbilly headed towards on top of the roof, they catch up to Terry and about to kill him, Spawn stops them. Merrick, who was horrified watching her partners Leon being strangled and murdering the hillbilly. Leon and the Russian hillbilly's corpses are presumably burned as the roof was set on fire.

The Hillbilly seems to be a ruthless, sadistic and perverted assassin, wanting to skin Terry once he catches and an inappropriate joke about Merrick and of her past with the Russian mob, even disgusting Leon, which the assassin showed to dislike the Hillbilly. He is also shown to be a misogynist, telling Leon that he doesn't trust a woman watching his back. 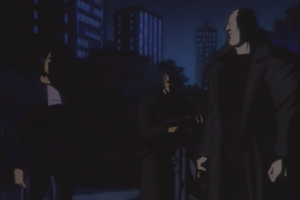 Merrick with Leon and the Hillbilly.