Rapists
The Hillbilly Rapists are a group of one-time villains from the FOX Animated Sitcom The Cleveland Show, only appearing in the episode "BFFs". They are a team of four unnamed hillbillies who tried to molest The Guys, after putting wigs on them and pretending they were girls.

They were voiced by Mike Henry, Will Forte, Jason Sudekis, and Jeff Bennett.

The Guys were lost in the woods and on their search for civilization, they came across four hillbilly rapists. The rapists pointed guns at them and demanded for them to put on blonde wigs and pretend to be girls. They took the guys to their log cabin, but on the way there, the four of them tried to run away. Cleveland was the only one who escaped. One of the hillbillies tried to describe the appearance of the one who fled. When he mentioned he was "black", another hillbilly told him to leave race out of it. Another hillbilly misheard "race" as "rape", and they laughed at the ridiculous idea to excluding rape from their kidnapping of The Guys. This eventually distracted them from the fact that they even lost him.

The hillbillies tied up The Guys to chairs in a log cabin, while they got ready to molest them. Cleveland returned to save them, but only got himself caught too. By the time one of them was about to rape him, Peter Griffin and the Evil Monkey burst in and saved them. The Evil Monkey went ballistic and attacked them, ripping their faces and nuts off. Meanwhile, Peter untied The Guys and saved them before the hillbilly rapists could do anything. Peter explained that he knew where they were based off of a phone call from Donna, saying the last time her husband was seen, was when he and his friends were "doing friend stuff in the woods". He immediately deduced that it'd end up in them getting raped by hillbillies and explained the different between both their shows. Peter said that if they did the same plot on Family Guy, the ending would have gone differently, with them showing The Bar Buddies getting raped, which would be instantly followed by a musical number. Cleveland added that if he was still on the show, he would have simply just been "the black guy" the whole time. 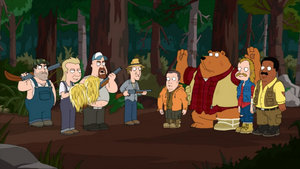