HIM
God
I am I
The Poet
YHWH
Creator

To be praised even if it means harming Mother (failed).

Start his life over again (succeeded).

Him, also known as God, is the main antagonist of Darren Aronofsky's 2017 psychological horror film, Mother! (stylized as a mother!). He is the husband of the film's protagonist called Mother.

He was portrayed by the Academy Award Winner Javier Bardem, who also played Raoul Silva in Skyfall, Anton Chigurh in No Country For Old Men, Captain Armando Salazar in Pirates of the Caribbean: Dead Men Tell No Tales, Felix Reyes-Torrena in Collateral, and Felix Marti in The Gunman.

He is a well-renown author suffering from writer's block whilst residing in a country home with his wife, Mother. One day, a Man arrives at the house, requesting for a room to stay in that night. Seeing potential in this, Him agrees and welcomes him in, much to Mother's chagrin.

Soon, Man begins to suffer from a coughing fit; as He assists Man by holding him over the toilet, Mother catches a quick glimpse at a fresh wound on Man's rib area which her husband immediately covers up with his hand. The next day, Man's wife Woman arrives at the house.

Despite Mother's growing frustration, He goads her into allowing them to stay because they praised him for his work. However, when Man and Woman accidentally shatter a crystallized object that Him cherished, Mother yells at them to leave.

Later on, the couple's sons come to the house to discuss the possessions that their father had left in his will. The two get into a fight culminating in the Older Son overpowering and killing his Younger Brother. A funeral is held for the Younger Son, which further enrages Mother as more people were making themselves unwelcome guests in her home.

After the house gets flooded, Mother angrily rants to Him about how much affection he gives his followers while he doesn't give her any treatment of that sort. The two then physically come together.

Mother announces that she was pregnant the next day. With his writer's block subsided, Him becomes inspired and immediately scrambles to write down his discovery. Nine months later, Mother gives birth to a son in her husband's study. Him informs her that the crowd desired to see the baby, Mother starkly refuses, knowing that they would most likely harm the crowd. Him waits for a few days and seizes his opportunity when Mother falls asleep.

When she awakens, she realizes in horror that her baby was gone. The crowd starts to pass the baby around in a rapid succession, but a sickening snap is heard over the commotion. Mother forces herself through the heart of the crowd, and she realizes that not only did the crowd kill her baby, but they had also desecrated his body and are cannibalizing him.

In anger, Mother grabs a glass shard and slaughters a great many of them only to then be overcome by the riled up crowd who strip and beat her. While Him saves her, he suggests that they forgive them, because he can't bring himself to kick them out because they worship him. Finally having enough with her husband's ignorance, Mother goes to the cellar and ignites the furnace oil tank, destroying the house and the crowd. The only two people left alive are a (badly charred Mother) and Him.

As He takes her upstairs, he explains that as a creator, he can never be satisfied. He asks Mother to provide him with the last bit of love she had left for him, he rips out her heart, crushes it, revealing a large, crystallized object, the very same from the beginning on the film. He soon places the crystal on the wall, causing the house getting remade, and a new Mother waking up in bed, pondering on where He is, starting the cycle over again.

Him comes off as a self-absorbed man who willingly allows these people into his house solely to stroke his own ego. This comes at the expense of the Mother whom he seems to not care about. She would continually show her approval towards him, but he never put her opinions into consideration. He also restrains from engaging in sexual intercourse with her (which some have interpreted as his fear of the cycle continuing again), but he does give in when she questioned him on it. When she became pregnant, this sparks an idea in Him.

However, in his craving for fame and worship, He foolishly allows the crowd to roughly handle his child, which leads to its death and subsequent cannibalism. And despite this, He instead suggests to Mother that they forgive them for what they had done. However, this ultimately goads Mother to burn the house down, consuming everything other than Him.

Despite his narcissistic attitude, in Mother's final moments, He asks her if she has any love for him left inside of her. He then removes her heart and places it on the mantle which reconstructs the house. This could be interpreted as Him being truly remorseful for what he had permitted, but it could also be taken as him trying to start over, thus the cycle continues.

The most common interpretation on the film is that the story is a metaphor for religion, with Him representing Abrahamic God. In the film, Him is visited by an aging man who was a fan of his work (i. e. meeting his creator before his death). In one part of the film, Him covers a wound on Man's rib, and the next day, Woman arrives to the house. This is generally seen as an allusion to the story of Adam and Eve. According to this theory, the couple's sons represent Cain and Abel (Cain is often regarded as being the progenitor of evil for mankind), and like the biblical account, the eldest brother murders the younger brother, and is given a mark on his forehead before being exiled.

He began to regain the popularity he had lost when he becomes inspired to write again. While we never see what he wrote, it can be assumed that he is writing the Bible, in particular, the New Testament. And when he puts his newborn son on display, it is seen as a metaphor for God sending his son as a sacrifice for mankind. Despite the crowd killing and cannibalizing his son, he can't bring himself to exile them, which goes into the theme that God is willing to forgive a sinner if they were repentant.

However, this version of the Almighty can be seen as uncaring and is primarily motivated by receiving praise. He craves it so much, he is completely willing to subject Mother to harsh conditions, exploiting her love for him. Another theory suggests that Him is not the true creator; rather, it is Mother. In the last scene, Him rips Mother's heart out in order to restore the house, thus meaning that unlike the Abrahamic view on God, Him is weaker, having to need his wife's crystallized heart in order to create. This goes in contrast with the more traditional versions of God who is said to have spoken everything into existence.

Alternatively, many also believe that He actually represents an artist. Mother would subsequently represent its muse, and how artists often sacrifice their beauties for their work.

Another lesser-known theory infers that Him is most likely the antithesis of Mother. While Mother represents creation, Him represents the opposite with allowing crowds of people to invade and destroy the house, and how he held a crystalized heart in a sinister way. The film begins with Him being surrounded by flames, almost as if to suggest that he was a satanic force of destruction. As the cycle continues, Him finds himself caught in a loop of destruction and creation. He could try to make different decisions in each revision of the loop, but he is forever trapped. It can also be argued on whether or not all of the other times the world is rebooted, Him may not even be fully aware of the extents of the loops. 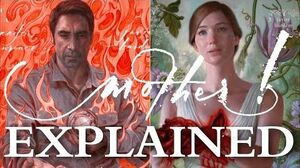 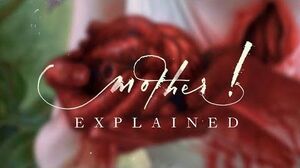 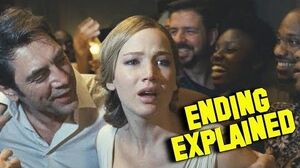 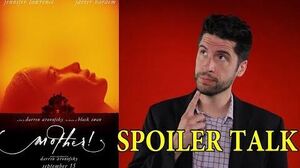 Mother! - SPOILER Talk! (My Interpretation Of The Movie) 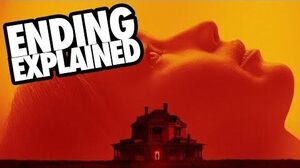 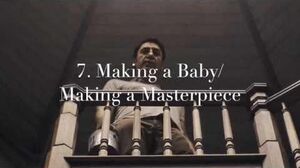 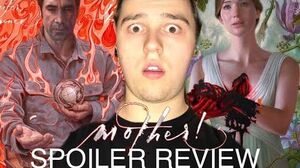 Mother! Explained - Spoiler Review ( My Thoughts)
Add a photo to this gallery

Retrieved from "https://villains.fandom.com/wiki/Him_(mother!)?oldid=3889779"
Community content is available under CC-BY-SA unless otherwise noted.