Participating the attack against Chaledea

Participating the rise of Lostbelts

Hinako Akuta, with her true identity as Consort Yu, is a major antagonist in Fate/Grand Order: Cosmos in the Lostbelt and the main antagonist of its third chapter, SIN: Land of Unified Knowledge, serving as the third member of the Crypters to be confronted.

She is voiced by Mariya Ise, who also voiced both Reve & Dorothy Ainsworth in Black Clover, and Midari Ikishima from Kakegurui.

Hinako Akuta was born as the Pan-Human History version of Yu Miaoyi, also known as Consort Yu and Beauty Yu. After the failure of Xiang Yu, her husband, Consort Yu committed suicide. However, she was later transformed into a True Ancestor vampire and became an immortal.

During her eternal life, Consort Yu tried to meet her beloved Xiang Yu once more after witnessing so much deaths and tragedy, including the tragic suicide of Gao Changgong, the Prince of Lanling.

Sometime later, Consort Yu started to disguise herself as a human and began to find a way to bring back her beloved Xiang Yu. She was later chosen to become a Master in Chaledea, hoping to summon a Rider-Class Servant in order to meet Xiang Yu once more.

During her days in Chaledea, Hinako worked as a technican and showed to be a friendly and bookish botanist. Due to her True Ancestor identity, Hinako refused to let Dr. Roman to do a body examination on her.

Hinako made two minor appearance in the first two chapters. In the first chapter, Hinako attended the meetings between the Crypters and believed her Lostbelt was not suitable for expansion, hinting Shi Huang Di's interference. After staing her wish to leave the Lostbelt conflict, Hinako cut off the transmission in order to meet the Emperor in time.

In the second chapter, Kirschtaria Wodime mentioned that Hinako received the news of the Russian Lostbelt's loss rather late because of the Emperor's interference. In her message, Hinako lamented about the destruction of Russian Lostbelt and could not even keep her poker face while facing Kadoc Zemlupus' defeat.

Disgusted, Hinako called out Koyanskaya as the latter's mourning was fake, claiming she was even more disgusting than the problems caused by Chaledea. Blaming Koyaskaya as the reason for Kadoc and Ophelia's downfall, Hinako also stated that she was relieved that Ophelia died so that Koyanskaya wouldn't got her Mystic Eye as a collection.

Irritated, Koyanskaya talked back at Hinako and satried her uncaring attitude towards Ophelia, causing Hinako to get enraged and lashed out at the fox-human, revealing sharpened fang inside her mouth. Before a fight could ensued, Scandinavia Peperoncino stopped them from quarreling, before bluntly stating his sadness over Ophelia's passing.

After both sides were settled down, Peperoncino then proposed a funeral attempt for Ophelia. However, Hinako rejected an idea of funeral, saying she already prepared a bunch of flowers to mourn Ophelia. Then, Hinako left for the Chinese Lostbelt, but not before she stated to Kirschtaria that she never wanted Koyaskaya to enter her Lostbelt ever again.

After losing Xiang Yu, Consort Yu broke down in rage and fused herself with the Fantasy Tree Mayall in an attempt to spite, causing it to reach its matured stated. The Chaledea Crew went the top of the Fantasy Tree and started to attack it, with the assistance of Qin Shi Huang by their side. With the Emperor's compliance, the Chaldea Crew successfully cutting down the Fantasy Tree and released Consort Yu's essence from inside.

As she laid dying and in disillusion, Consort Yu was eventually convinced by the Emperor, who suggested her to become a Heroic Spirit as an act to redeem herself. Eventually, Consort Yu complied and believed she would eventually get summoned together with Xiang Yu. After that, she vanished as her Lostbelt started to crumble into nothingness.

Along with Qin Shi Huang and Red Hare, Consort Yu becomes an obtainable 4-Star Assassin-Class Servant after the SIN chapter's second summoning capaign. After being summoned, she still showed hard feelings towards Ritsuka (also the Players) for defeating her in the Chinese Lostbelt, but is willing to submit herself to become their Servant in spite of her grudge.

It is notable that Consort Yu is the first Servant who insulted the Protagonist upon being summoned due to their grudge against them. Her first phase still shows some trace of Hinako, before gradually transforming into her True Ancestor form.

During her interlude, while intentionally trying to stand against the protagonist, Yu had problems understanding Ritsuka's thoughts and how to befriend them, despite of being her senior. After a discussion with Gao Changgong, Yu decided to take his advice and asked gods about it. She proceeded to find Ishtar, Parvati and the Jaguar Warrior, who all preferred Emiya (in a face suitable for wearing an apron) as a better consultant.

Yu soon found Emiya, who unwilling to comply and adviced to start a simulated battle between Ritsuka and Yu, something Sion agreed. After being defeated for the first time, Yu protested, and Sion proposed to switch Servants that the both sides used during the battle in the Chinese Lostbelt, with Ritsuka using Changgong only, and Yu using Nezha, Spartacus, Red Hare, Modred, Mash and Jing Ke. However, Yu comically proved herself to be a horrendeously lousy fighter, who added debuffs upon all of the Sevants on her side and was defeated.

Seeing this, Yu was shocked and angrily questioned whether Changgong was being lazy while fighting in the Lostbelt. However, the other Servants accused Yu for her lack of capabilities, causing Sion to wonder, since she thought Hinako/Yu was the most skilled member of the A-Team. Then, Mash revealed that Holmes discovered fabricated information on Hinako's profile, much to Yu's anger.

As the people were arguing, Xiang Yu arrived to comfort his wife, much to her pleasure, until Xiang Yu revealed that he would also join the fight on the side of Ritsuka. Yu was so shocked and ashamed that she immediately reduced the HP of all of her temporary Servants into 1, along with a load of debuff invoked upon them. After the final battle, everyone was exhausted and fraustrated. Yu becamed enraged and accused Ritsuka to be petty, and she stormed out of the control room in fury. Xiang Yu then apologized to the others about Yu's behavior, saying his wife was still a nice lady, but Spartacus and Red Hare remained skeptical.

It later turned out that Ritsuka was bribed by Xiang Yu to play nice to Yu all along, and everyone was angry at Ritsuka's deeds. Changgong even accused Ritsuka to be inhumane and suggested them to "be a human at first" before taking their charge as a Master. However, Mash adviced Ritsuka to return everything back to Xiang Yu and ceased the event. Soon, everyone began to worry whether Yu would become Avenger after such event, or her relationship with her husband would be strained, considering there were likes of Caesar and David in Chaldea. Eventually, Mash concluded that they still had so much left to do to blend Yu into their place. 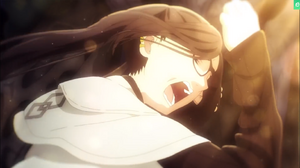 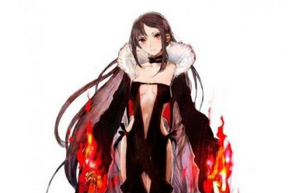 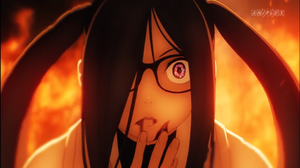 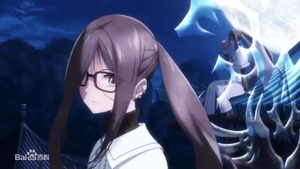 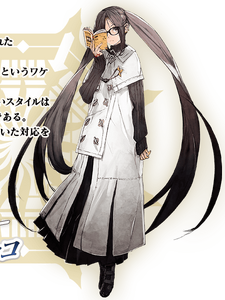 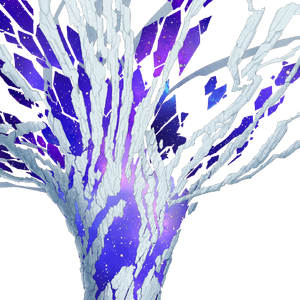 Retrieved from "https://villains.fandom.com/wiki/Hinako_Akuta?oldid=3980458"
Community content is available under CC-BY-SA unless otherwise noted.