Villains Wiki
Register
Don't have an account?
Sign In
Advertisement
in: Mature, The Cleveland Show Villains, Cults,
and 18 more

To remain in control of the world and its economy through fashion trends and rap music among many things.

The Hip Hop Illuminati is a secret society of the world's famous rap/hip hop artists. They serve as the eponymous main antagonists of the season 4 episode "Menace II Secret Society" of The Cleveland Show.

The only known 5 members of the Hip Hop Illuminati are Kenny West (voiced by Kanye West), Nicki Minaj (as herself), Questlove (as himself), Bruno Mars (himself), and Will.i.am (as himself).

When Cleveland visits Kenny West to hook up his cable, he finds Kenny has moved on to stardom. When Cleveland finds out that he was left out of the stardom and awards, he complains and is shown the trap door. Cleveland sneaks back in to steal one of the awards but stumbles into a gathering and passes out. He awakens back in his own bed and when he tells the family, Federline hints that he may have stumbled into a hip hop, cult-like group called the Hip Hop Illuminati that secretly controls the world from global economy to fashion trends among many things.

Despite his family's disbelief, Cleveland returns to Kenny's to prove he did find the Hip Hop Illuminati but fails. After Cleveland gets kicked out of his mansion, Kenny goes to the group and tells him that Cleveland has been fooled. However, Cleveland continues to try to crash the gathering by disguising himself as an ostrich and manages to get in. After he is revealed he tells of having written Kenny's hit song they reveal the extent of their power. Cleveland tries to enter into the group but is sent packing. But when he arrives home, he finds the rest of the Hip Hop Illuminati there as they ask him to kill Kenny West's career as Kenny's pushy ego has offended the rest and they offer to let Cleveland into the organization if he succeeds.

Principal Wally restarts the school marching band but Junior is cut along with some other misfits. Deciding to take advantage of their particular musical instrument collection, they form a polka band. When the rappers hear the band playing Cleveland gets the idea to import the polka music into Kenny's rap act.

Cleveland manages to convince Kenny that polka is his way to reconnect to rap. As he thinks he has pulled off ruining Kenny's career, Kenny decides to give Cleveland the Grammy for “Be-Cleve In Yourself". Cleveland tries to stop him but Kenny goes out with the polka band and actually makes a hit out of merging polka and rap. Even so, Kenny's rotten attitude gets even worse as the rappers berate Cleveland. However, Kenny decides he is too big for the group and leaves Cleveland in his place. But, the Illuminati choose to disband rather than endure Cleveland. 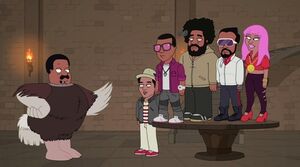 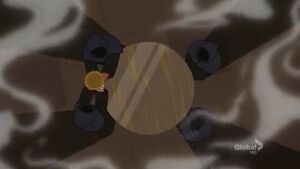 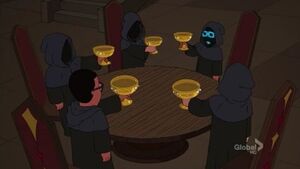 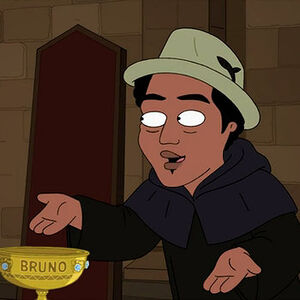 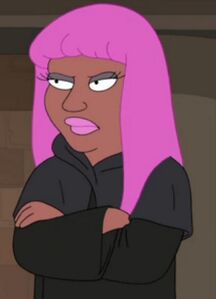 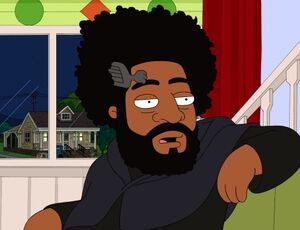 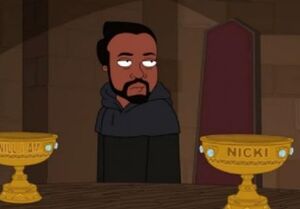 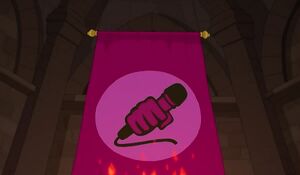 The symbolic banner of the Hip Hop Illuminati.