Maintain his rule over Dunwall.

Bringing The Rat Plague to Dunwall

Hiram Burrows is the secondary antagonist in the 2012 video game Dishonored.

Burrows is the Lord Regent and former Spymaster of Dunwall. After initiating the assassination of Empress Jessamine Kaldwin, he seizes control of Dunwall, acting as Lord Regent, although his title was taken over by Admiral Havelock after Burrows is arrested/killed and Havelock betrays Corvo.

His rule is both oppressive and corrupt, which causes the people of Dunwall to begin to rebel. This dissatisfaction becomes more pronounced as Corvo eliminates Burrows' allies, cutting off his funding and crippling his ability to pay the City Watch. Burrows, however, blames the city's problems on the Empress, and on the laziness and disorder of the common folk. Corvo is tasked with assassinating him during the mission, Return to the Tower.

He was voiced by Kristoffer Tabori.

Hiram Burrows is the spymaster of Dunwall. In this role, he often made use of the assassin Daud, though he kept this a secret. Opposed to the kind Empress, Burrows despised the poor, thinking of them as beggars and scoundrels who waste their time in filth and drink. To eliminate them and thereby poverty, he created what he called a Poverty Eradication Plan. He secretly released plague-bearing rats from the Pandyssian Continent into the city's poorest quarters, thereby spreading the disease. However, things got out of control when the rats bred at a sickening rate and escaped the catchers, thus eventually killing half of Dunwall's population. The disease also caused the nearby kingdoms to blockade Dunwall to prevent the plague from spreading. With most of the city affected by the plague, the Empress assigned Burrows to investigate whether the rats had been imported by a foreign power, not knowing that he was in fact responsible. Fearing that the truth would surface eventually, Burrows hired Daud to kill the Empress. To ensure Daud's success, Burrows convinced the Empress to send her personal guard and most trusted advisor Corvo Attano into the nearby kingdoms as an ambassador to find out if any of them had encountered this plague before. However, Corvo returned home earlier, arriving shortly before Daud intended to strike.

When Corvo returns to the tower, he finds Empress Jessamine Kaldwin arguing with the Spymaster. but Jessamine claims that the plague victims are sick people and not criminals, also stating that they are her people and that they will not be abandoned. She coldly tells Burrows that they will not speak this again. They are then interrupted by Jessamine's daughter Emily who informs them of Corvo's return. Jessamine dismisses Burrows to listen to Corvo's report. Burrows leaves the pavilion, taking the guards with him to "give them some space".

While walking past Corvo, Burrows states that Corvo has arrived two days earlier than expected, calling him "full of surprises, as always". After he and the guards are gone, Daud strikes. Though Corvo manages to fend off the assassins for a moment, he is eventually overpowered and forced to watch Daud kill the Empress. The assasins then grab Emily and flee, leaving Corvo behind with the dead Empress. Moments later, Burrows and the guards burst in. Seizing the oppurtunity, Burrows blames Corvo for Jessamine's death and has him knocked out and imprisoned.

Corvo is brought to Coldridge Prison, where Burrows and his accomplice High Overseer Campbell reveal that they are behind the death of the Empress, and that it was fortunate that Corvo arrived earlier as this allowed them to pass the blame on him. They have Corvo tortured, offering him to stop the torture when he signs a confession. When Corvo refuses, Burrows states that the confession is not neccessary, merely useful. Burrows then has the guards bring Corvo back to his cell to await his execution the next day. However, aided by the Loyalist Conspiracy under Admiral Havelock, Corvo manages to escape and sets out to get revenge.

To get to Burrows, who has been named Lord Regent, Corvo starts taking down his supporters to reduce Burrow's influence. At first destroying Burrows' backup by the Faith by eliminating Campbell, Corvo frees Emily from the Pendleton brothers, who were Burrows' supporters in the parliament, and takes them down too. Eventually, the Loyalists find out the identity of Burrows' mistress and financial backer, Lady Boyle. Corvo infiltrates the Boyle manor during a masquerade ball and eliminates her. After this, the Loyalists decide that Burrows is now vulnerable enough to be attacked.

Return to the Tower

Corvo returns to Dunwall Tower to take down Burrows. After infiltrating the area and evading the high security which Burrows, having grown more and more paranoid after the deaths or disappearances of his allies, has installed, Corvo enters the tower. If Corvo has been detected while outside, Burrows will have fled to his saferoom on the roof of the tower. If Corvo has successfully remained stealthy, Burrows will be located in his chambers. Corvo has the oppurtunity to use a screen in the foyer to contact Burrows and reveal that he has come for him. This causes a horrified Burrows to flee to the saferoom.

As with every assassination target, Corvo can decide whether to eliminate Burrows in a lethal or a non-lethal way. If Corvo decides to spare Burrows' life, he must enter the broadcast room, where announcements are broadcast across Dunwall via loudspeaker. There he finds the Propaganda Officer, who offers to help Corvo ruin the Lord Regent politically should Corvo spare his life. The Propaganda Officer gives Corvo the code to Burrows' safe, in which Corvo finds a recording that gives evidence to Burrows' influence in the rat plague and in the murder of the Empress. Corvo returns to the broadcast room with the recording, allowing the Propaganda Officer to broadcast the confession all over Dunwall. This leads to Burrows' arrest by his own guards and, although he tries to bribe the guards to let him go, he is imprisoned at Coldridge Prison. It is revealed that Emily has him executed later on for his crime.

Burrows can be eliminated in loads of ways. If he is in his saferoom, Corvo must first defeat enemies and deactivate a wall of light in order to reach Burrows. Upon confronting Burrows, Burrows demands for Corvo to remove his mask. Corvo can do so, shocking Burrows when he realizes whom he is facing, or deny ir, claiming that Burrows will never know. After the conversation, Burrows turns hostile and attacks. As with all other assassination targets, if Corvo decides to murder Burrows with his sword, a special animation plays in which Corvo stabs Burrows in the shoulder, then turns him around to the other side while the sword is still stuck in his body. Corvo then grabs hold of Burrows' head and breaks his neck, retrieving the blade before the Lord Regent falls.

After the elimination of the Lord Regent, Corvo returns to the Hounds Pitt Pub, where he is greeted by the celebrating loyalists. However, Corvo is then poisoned and betrayed by the Loyalists who take controll over Dunwall. Aided by Samuel, Corvo is able to escape. The Loyalists then gain control over Dunwall, with Havelock as the new Lord Regent.

Burrows talking to the Empress.

Burrows in his saferoom. 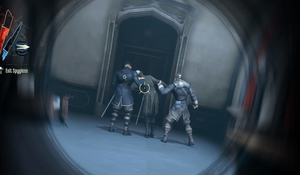 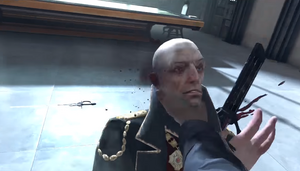