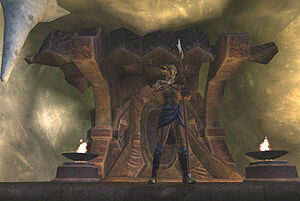 Hircine is the Daedric Prince of Hunting. As far as hunters go, he is fairly honorable, and he does what he does for sport.

He is responsible for the existence of lycanthropy in the Elder Scrolls universe, and when those afflicted with his "gift" die their souls go to his realm where they participate in his hunts for all eternity. In addition to Werewolves, Hircine's creations are also said to include Werelions, Werebears, Wereboars, Werevultures, Werecrocodiles, and even Weresharks! However, only Werewolves are featured in any of the games. Based on his boss fight in Bloodmoon, it would appear that Hircine himself has the abilities of all these types of lycanthropes.

Hircine is the central antagonist and main boss of the Bloodmoon expansion for Morrowind, as mentioned above. The "Bloodmoon" is an event in which Hircine appears and makes the greatest champions on the island of Solstheim hunt each other to the death before the winner fights the Daedra himself.

In Oblivion, Hircine's quest involves finding and killing a Unicorn.