Get revenge on the girls who rejected him.

Hiroki Makise, also known as the Pyxis Zodiarts, is an antagonist in Kamen Rider Fourze. He is the president of Amanogawa High's astronomy club who is infatuated with Yuki and constantly stalks her. He is also one of the Zodiarts.

He was portrayed by Takafumi Shinohara.

After seeing her with Gentaro, overpowered by Kamen Rider Fourze and the Powerdizer in their first fight, Makise is heartbroken and decides to make Yuki pay for her choice in friends. To that end, he pretends to help Yuki find the missing locker that connects to the Rabbit Hatch so he can destroy it, succeeding by redirecting the missiles from Fourze's Launcher Module.

Soon after, Makise decides to exact his revenge on every other girl who rejected him by having them get on a bus which he would force over an unfinished bridge. However, after the Zodiarts Switch assumes the Last One state, the Pyxis Zodiarts's scheme fails when Kamen Rider Fourze Elek States uses the Stealth Module to move around unseen, breaking the horns on his arms off with his Billy the Rod while he is at it. Rendered powerless, the Pyxis Zodiarts is quickly destroyed, with Makise back in his body as he receives swift and brutal retaliation from the girls.

He made a brief reappearance during the Aquarius incident, having qualified for the same Astronaut Quiz as the KRC members. Yuki and Tomoki are unnerved by his appearance, with the latter calling him "the enemy of womankind"; however, Makise merely seems confused by this accusation. He was eliminated after the first test.

Obtaining a Zodiarts Switch, Makise becomes the Pyxis Zodiarts and uses his dowsing rod-like horns to track down anything and also direct the motion of any object he points them at. In combat, the Pyxis Zodiarts can use the mentioned horns to slash his opponent, though in a very ineffective manner as Makise himself is not a competent fighter. 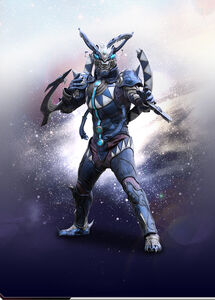 Pyxis Zodiarts
Add a photo to this gallery

Retrieved from "https://villains.fandom.com/wiki/Hiroki_Makise?oldid=3702948"
Community content is available under CC-BY-SA unless otherwise noted.