President of BOARD (formerly)

Hiroshi Tennoji (天王路 博史 Ten'nōji Hiroshi) is the main antagonist in Kamen Rider Blade. He is the chairman of BOARD who intentionally set up the series of events in the fake Battle Fight and the creation of the Category Ace Undead Kerberos, so that he could have his "dream" come true: this warped dream being the creation of a new world order with himself as its ruler.

He is portrayed by Kohji Moritsugu, who is best known for his role as Ultraseven/Dan Moroboshi in the Tokusatsu series Ultra Seven.

Initially believed to be a heroic figure at least by his subordinates, it is revealed that Hiroshi Tennoji serves as the real mastermind behind all of the tragedies in the entire Kamen Rider Blade series. He absolutely reeks of obsession for self-preservation and world domination by any means necessary. Tennoji is one of the few people who knows about everything connected to Undead.

As the head of BOARD, Tennoji creates the Battle Fight by releasing the Undead and manipulating his contracted Kamen Riders to take them out. As the battle progressed, he invented the Trials and the Titan Undead, all so he could buy himself time to create Kerberos, an artificial Undead with DNA from all 53 Undead that could surpass the Black Joker itself.

At the climax of the story, Tennoji's true nature is revealed, and his invention kills the entire BOARD staff upon being born from the Stone of Sealing before he seals the artificial Undead to create a new Change Card. He uses the card to transform into Kerberos II before revealing his dream: to create a new world order with himself as its ruler.

It took all four Riders to fight Kerberos II, with Blade King Form's Royal Straight Flush and Wild Chalice's Wild Cyclone only able to reverse the fusion. However, the Giraffa Undead takes the Change Keroberos for himself in the fight's aftermath for his own agenda. In the end, Tennoji was defeated by the Riders with his dreams shattered, before the Giraffa Undead finished him off. 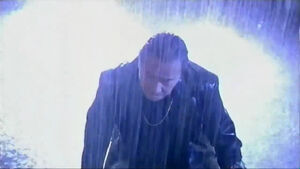 Hiroshi Tennoji's defeat.
Add a photo to this gallery

Retrieved from "https://villains.fandom.com/wiki/Hiroshi_Tennoji?oldid=3728760"
Community content is available under CC-BY-SA unless otherwise noted.