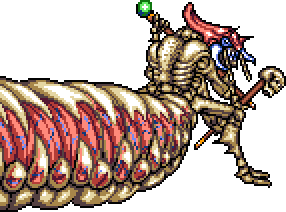 The Hive Queen is a major antagonist from Romancing SaGa 2.

The Hive Queen is a huge monster and progenitor of the Termites, which feed on other creatures including humans. She made her hive beneath the Savannah, where she grew to an enourmous size and started laying her eggs, with her termites eventually infesting and annihilating the town of Gregale while threatening the towns of Ponente and Ostro. When the current Emperor visits Ostro, he hears about the infestation and stays for the night, but the termites attack the town, having dug up a hole in the middle of it.

The Emperor climbs down the hole to find the source of the termites, eventually finding an undeground village where the Mole People lived but which had been overrun by the termittes as well, who almost annihilated their population. The Emperor rescues the few remaining Moles and follows the tunnel, where he finds the Hive Queen's head. By killing the Queen the termites all die as well, freeing the entire Savannah from the infestation.

Many centuries later, however, the termites return and attack Avalon directly, infestating the city and eating it's denizens from inside out. During a conversation, the chancellor of Avalon warns the Final Emperor about the termites attack but is eaten himself, so the Eperor, knowing they could only be coming from below, investigates the Avalon sewers and the crypt below, here he finds a hole in one of the crypts, finding a new hive inside. He battles throught the termites and once again finds the Hive Queen, who had already grown up to her previous gigantic size.

The Final Emperor confronts the Queen, who reveals that back when she was first defeated she planted a egg inside the current Emperor, which allowed her to be reborn beneath Avalon. Having grown more powerful than before, she attacks the Final Emperor to exact revenge, but is once again killed and her termites extinguished. 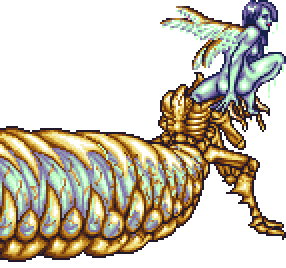 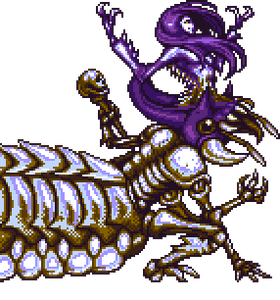 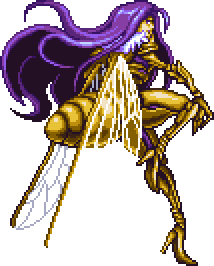 Dread Queen
Add a photo to this gallery

Retrieved from "https://villains.fandom.com/wiki/Hive_Queen?oldid=2948187"
Community content is available under CC-BY-SA unless otherwise noted.