The Hobo is the titular protagonist villain from the online video-game series Hobo.

He is a homeless man who fights people (if not often, those who dont challenge him.) he crosses along his way. He makes appearances in seven games. Hobo is known to be very lazy but when it comes to attacking him, he goes out and attacks as many people that get in his way.

Hobo is a homeless man with black long dirty hairs and beards. He wears a torn white tanktop and blue pants with an only sandals in his left foot.

Hobo is a lazy and ruthless person who can kill anyone on his way, including innocent women and children. He doesn't seem to care about the others excluding himself.

Hobo appears to be laying on the ground, sleeping in the middle of the day. Police officer sees Hobo sleeping and gets really angry and ends up hitting the Hobo, showing the Hobo a sign that says that city-dump isn't allowed. Hobo then becomes upset and attacks the officer after of which he ends up murdering him and goes on to process and murder much more people in the city including several Police Officers and Civilians. Hobo fights the Garbageman and wins. In the end, Hobo surrenders to the officers and is put in jail. Hobo is last seen sleeping in the jail cell.

In the second part, Hobo is seen sleeping again in his jail cell. When the prisoners are let out for lunch time, Hobo's inmate sees that Hobo didn't clean the toilet when he took a dump. The inmate attacks Hobo, showing him the dirty toilet, which makes Hobo again furious and proceeded into murdering the inmate and go into a brutal rampage in order to kill all the officers and the inmates. In the end, Hobo fights Troops, defeats them, and escapes prison.

In the third part, Hobo was again laying on the ground as he is homeless, and a officer recognizes him as one of the wanted criminals. The officer attacks Hobo, showing him his wanted poster, but Hobo becomes enraged and starts another massacre. Hobo ends up murdering a lot of officers, people and Troops. In the end, Hobo escapes the city, goes to the nearest tree and falls asleep.

Several army soldiers end up finding Hobo asleep on the tree. The soldiers again fail to take Hobo into a jail, with Hobo starting another massacre, where he kills a lot of soldiers. In the end, Hobo fights with a tank and manages to defeat it with its fighting skills. Hobo ends the fourth part by going to another tree and falling asleep. An alien spaceship then shows up and abducts Hobo.

Hobo ends up getting removed from earth by the aliens, which took Hobo to study him. The aliens ended up making clones of Hobo's and Hobo becomes upset and starts a massive massacre in the alien-space ship with his clones and the aliens. The ending is the same as usual, Hobo murders everyone in the ship and then goes to sleep.

Hobo dies in the spaceship due to the spaceship running out of oxygen. As expected Hobo was sent in Hell, and has to fight with all the demons and residents of Hell. Hobo also fights with various demonic-creatures. In the end, Hobo has to defeat Satan himself in order to leave hell.

Hobo ends up destroying Hell and gets sent into Heaven. He gets attacked and sees a sign that says that Hobos aren't allowed in Heaven. Hobo gets furious and ends up attacking and killing everyone in Heaven. Hobo has to defeat all the Angels and in the end he has to battle God in order to leave Heaven. In the end, God grabs Hobo and tells Hobo that he can't defeat God. In the end, Hobo ends up falling asleep in Heaven, staying there for the assumingely rest of eternity.

In the games, Hobo learns new combos, which he uses in order to kill his victims faster then usual. In every part, a new combo is learned:

When someone wakes up the Hobo, he will attack anyone who he sees. Most of his victims would fight back, and try to defeat the Hobo, but some are very weak to the point they are just trying to run away from Hobo in order to survive. Mainly Hobo's victims appear to be adult-men. In some occasions, Hobo would even attack women and children with out any remorse. After all of his rampages, he would just find a quiet place and go to sleep like nothing happened to anyone. 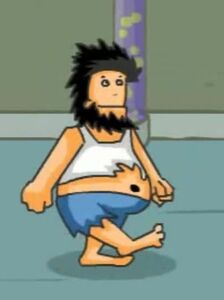 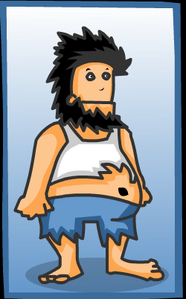