Revive Cindry and live with her (successful)

Dr. Hogback is a skilled surgeon who entered the employment of Gekko Moriah, assisting him in creating his undead army. He was one of the major antagonists of the Thriller Bark Arc and one of the Mysterious Four.

Hogback is an arrogant man who mostly cared for his scientific advancement and knowledge. To the public, Hogback is seen as a hero who saved many lives but he actually cares about gaining power. Hogback was very interested in the arts of immortality and how to overcome death by using his master's, powers of taking one's shadow and placing it into inanimate bodies to bring it to life. Like Absalom and Perona, Hogback really cares for his master, Gekko Moriah, and his goal to becoming the Pirate King.

He used to also like a famous stage actress called Victoria Cindry. When she died in an accident, Hogback decides to use Moriah's power to revive her after stealing her corpse. He felt this was a way to stay with the one he truly loved. However, Hogback was shown to be abusive to her at times.

Unlike any member of the Mysterious Four, Hogback has no actually powers. Despite not being a fighter for the Mysterious Four, Hogback has shown to be a genius who knows a lot about the human anatomy and the anatomy of other animal species as well. He helps Moriah create his zombie crew by stitching together many pieces from many bodies to create a movable body. He also helped modify Absalom's appearance and improve upon his physical abilities, prowess, and sensory. 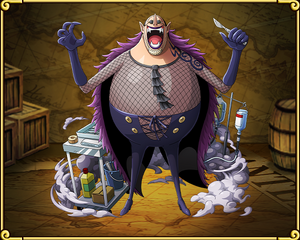 Retrieved from "https://villains.fandom.com/wiki/Hogback?oldid=4323030"
Community content is available under CC-BY-SA unless otherwise noted.