Exterminating life different from his own.

Bring glory to the Kashvar people.

Hoi is an evil wizard and the secondary antagonist in Dragon Ball Z: Wrath of the Dragon. He is the last surviving member of the Kashvar, an alien race of evil wizards who deemed themselves superior to all other species.

He was voiced by Shigeharu Matsuda and late Tetsuo Gotō in the Japanese version, and by Troy Baker in the English version.

Hoi searched far and wide to find the enchanted music boxes that contained Tapion and Minotia. The evil mage manages to find Minotia on a distant planet and frees him, after which Hirudegarn's lower half materializes and kills the boy by crushing him under one of its feet. Off in the distance, Hoi's villainous laugh can be heard during Minotia's death.

After his arrival on Earth, Hoi tries to jump out of a building while knowing that Gohan and Videl (as the two Great Saiyamen) would come to his rescue. Then, he proceeds to tell them about Tapion as well as a "crisis that threatens Earth", the "crisis" caused by an "evil" that "will ravage earth [...] consuming all" (Hirudegarn). With this information, he was able to trick the Z Fighters into helping him release Tapion (and Hirudegarn's top half). After failed attempts by Bulma's technical expertise and Goku's sheer strength, the Z Fighters locate the Dragon Balls, and they use them at Capsule Corporation to summon Shenron and release Tapion from his confinement. Even after Tapion is released (showing the truth behind his claims of Tapion's existence), both Gohan and Videl (Videl in particular, who never trusted Hoi to begin with) feel that Hoi is still hiding something from them.

That night, Hoi unleashes the bottom half of Hirudegarn on Satan City (even while not being the whole monster, it was causing massive devastation), with armed forces and eventually Gohan and Videl (as the two Great Saiyamen) attempting to stop its devastating rampage. However, Gohan and Videl are only able to cause minor damage to lower half of Hirudegarn and it is only Tapion who is able to cause the monster's lower half to retreat. Gohan and Videl do catch a glimpse of Hoi as he heads to Tapion's location.

Later, while Trunks was visiting Tapion, Hoi attempts to steal the Hero's Flute (to destroy it, to prevent Tapion from keeping Hirudegarn sealed away) and tells Trunks that Tapion is the true monster, but Trunks does not believe him and instead gives the flute back to Tapion. Even later that night, Tapion tells Bulma about Hoi's history: about being a member of the Kashvar, their belief in their supremacy in the universe, their systematic attempts to exterminate all races different from their own (believing them inferior and unworthy) and their attempted genocide of the people of Konats (Tapion saying that Hoi along with the other Kashvar), was responsible for the slaughter of half of his entire race, using Hirudegarn as a weapon of extermination). After Hirudegarn was defeated by being horizontally cleaved in two, the two halfs were confined inside the two brothers, who were further placed within a pair of music boxes which were sealed and sent to the opposite ends of the farthest galaxies. Bulma expresses anger at Hoi's actions, including his involvement in the possible murder of Minotia. Tapion explains that as long as he stays awake, Hoi cannot free the upper half of Hirudegarn (which is why he had little to no sleep between being freed till this point in time). Bulma tells Tapion that she will build him a chamber that functions the same as the music box, to allow him to sleep while also keeping Hirudegarn's top half contained, preventing Hoi from assembling the complete monster (only asking in return that he spend time with Trunks, something Tapion is happy to do, having grown fond of the boy). HoiPunchHoi attacking Tapion

The next night, Hoi unleashes Hirudegarn's lower half on West City once again. This time, the evil wizard allows Hirudegarn to consume humans around the city by absorbing them through his tail. He expresses his contempt for humanity and his intention to bring the universe under his control. He later attempts to free the upper half, but Tapion is able to keep it from escaping. Hoi then brings the lower half to Tapion's location. As Tapion explains, the closer the two halves are to each other, the more powerful each becomes and the stronger the attraction between them (the harder the effort to prevent them from rejoining at close proximity).

After finally reassembling the complete Hirudegarn, Hoi orders the monster to extinguish all human life on Earth. It is at this point that he reveals that he is the last Kashvar alive. When Tapion plays his ocarina to weaken Hirudegarn, Hoi mocks his efforts and claims that it will not save him any more than it did Minotia, revealing that Minotia is indeed dead by his hand.

After the efforts of Super Saiyan 2 Vegeta, Ultimate Gohan, Super Saiyan 3 Gotenks and Super Saiyan 2 Goku seem to be unable to destroy Hirudegarn and put an end to its ruinous rampage, Hoi begins laughing madly, commanding Hirudegarn to continue destroying the inhabitants of Earth. However, Tapion makes a last ditch effort to stop the monster and begins playing his ocarina to weaken it. Hoi scorns Tapion, but becomes shocked when not only is Hirudegarn unable to harm Tapion but is weakened enough to be temporarily sealed within Tapion in entirety. Tapion then asks Trunks to strike his heart with his sword, willing to sacrifice his own life to ensure Hirudegarn's demise. When Trunks seems as though he is going to carry out Tapion's tragic request, Hoi leaps in to action to prevent this. However, Trunks' distraught at the prospect of having to kill a friend, causes him to hesitate enough to allow Hirudegarn time to escape. Hoi arrogantly states that he is solely entitled to control Hirudegarn along with all "inferior creatures" that "pollute" the universe which belongs to him. He then orders Hirudegarn to "slaughter them all". Unfortunately for him, Hoi is killed by Hirudegarn when the monster inadvertently crushes him under his foot, thus killing the last of the Kashvars. Hirudegarn is slain by Goku shortly afterwards, bringing a permanent end to the threat that Hoi and his race started in the first place. 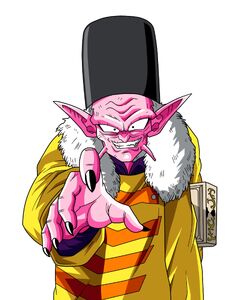