Villains Wiki
Register
Don't have an account?
Sign In
Advertisement
in: Mastermind, Agents of S.H.I.E.L.D. Villains, Marvel Villains,
and 48 more

Survive by assisting Hive in his plans (formerly).

Use the power of the Darkhold to perfect the Framework and create the perfect world where he can live with his love (failed).
Destroy the Framework for redemption (succeeded).

Anti-Villainous Scientist
Dr. Holden Radcliffe is a recurring character in the TV series Marvel's Agents of S.H.I.E.L.D., appearing as a major character in Season 3 and the secondary antagonist of Season 4.

He is a transhumanist and robotics expert who was kidnapped by Hive to create the Primitives. After Hive's defeat, he becomes a S.H.I.E.L.D. consultant and the inventor of the Life Model Decoys ("L.M.D.s" for short).

He was portrayed by John Hannah, who also portrayed his Richard Darian in I Accuse and Lord Nestor in The Last Legion.

Radcliffe is essentially a "mad scientist" who seeks the secrets of the universe however he can get them. Despite his up-front, sometimes kind, appearance, he can be incredibly deceptive, and even called his own ability to fool S.H.I.E.L.D. "Oscar-worthy stuff". In Season 3, he didn't trust S.H.I.E.L.D., thinking of them as the same as HYDRA, but was forced to rely on them when he was given a chance to escape from Hive, who had kidnapped him. While under Hive's captivity, he was determined to save his own skin, and justified his helping in his plans by saying he was kidnapped. He was very-much afraid of Hive, but wanted to prove to him that he has his uses. After creating the Primitives, who were horribly-deformed and lacked original thought (only what Hive thought for them, like a queen bee commanding her hive), Radcliffe considered them "abominations of science" and wanted to make more efficient, intelligent versions; despite his insistence, Hive believed that they were just perfect. After being rescued by S.H.I.E.L.D., he insisted to General Glenn Talbot and Agent Phil Coulson that he was doing Hive's work under duress, but they still held him accountable. After S.H.I.E.L.D. defeated Hive at the cost of Inhuman Lincoln Campbell's life, Radcliffe continued his scientific exploits.

In Season 4, Radcliffe showed Fitz his creation Aida, and thought that she could be used for missions that would otherwise cause mass casualties. Though this plan started out with good meaning, he slowly showed that he was impatient towards her, as she didn't understand slang and figures of speech. Nonetheless, Radcliffe detests bloodshed, and reprimanded Aida for killing Agent Nathanson after he saw May unconscious. After reading the Darkhold and being overwhelmed by its contents, Radcliffe became obsessed with it, abandoning most of his morality and becoming a sly, manipulative mad scientist who used Fitz and Simmons' affection for him to his own advantage. This went to the extent of kidnapping Agent May and replacing her with a May LMD. He argued with Aida a couple times regarding May's situation, and showed that he didn't want to kill anyone he didn't need to; however, he would later betray S.H.I.E.L.D. outright and side with Senator Nadeer to save his own skin and continue his plotting. After the May LMD discovered that she was not the real May, she confronted Radcliffe (his LMD counterpart), who told her that she could harm him at all and sent her back to the Playground, unable to tell anyone her discovery because she wasn't programmed to do so.

Despite his unethical behavior, he still relied on non-lethal methods to get the Darkhold; he deceived Agent Billy Keonig by putting him into his Framework device to map his mind, protesting against Anton's plan to torture Keonig. However, when the May LMD finally got the Darkhold and was nearly-destroyed, Radcliffe simply took the book and left her behind, saying that she wasn't "built to last", whereas Aida, the original LMD, was. He would later agree to help Anton track down Coulson and kill him, showing that he'd simply abandoned more of his sense of morality.

He begins to become obsessed with his invention, the Framework, and seemed to view it as an alternative to the real-world. He would spend entire days in it, and would be angry at Aida for taking him out of it, and viewed it as a way to keep the people inside content with their perfect lives. To this end, he put his faith in Aida to complete his plans and dealings with Anton Ivanov, despite his view of Aida as a soulless robot. He ended up becoming trapped in it by Aida after she found her opinions contradicting her programming to protect him and the Framework, and left him to die of blood loss (slitting his wrists with a knife) while his mind lived on in the Framework.

While in the Framework after Aida banished him there, he seems to be living comfortably with Agnes; however, after Fitz executes her in cold blood, he seems to become sad and depressed, as well as angry. He seemed to view everything in the Framework as fake and surreal, and believed that life without Agnes is no life at all, going on to mock Alistair Fitz for neglecting his son in the real-world, despite that this isn't really him, as the real Alistair was apparently a "blowhard". He still held hope that Fitz could be saved through the back-door, and viewed all of the Framework as a punishment for him for all of his actions; living in a fake world programmed by Aida, who is not technically a real person. He managed to fool Fitz into going to a steel mill where he throws him through the back-door, and even apologizes to Simmons for doing all of this. Eventually, as the Framework started deleting itself, Radcliffe accepted his end with peace, having some whiskey as the sun went down and he was deleted from the system forever.

Radcliffe, being an expert in robotics and a strong believer in Transhumanism, has built a variety of machines to help him in his goals: 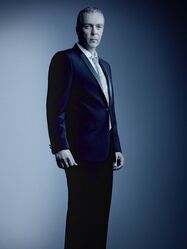