Guardian for the yellow origami streamer

The Hole Punch, also called The Disco Devil, is a major antagonist in Paper Mario: The Origami King. It is a member of King Olly's Legion of Stationery, guards the yellow origami streamer, and is the third member of the Legion to face Mario. It is a sentient yellow hole puncher.

The Hole Punch was once a regular hole puncher used by the Origami Craftsman to make his origami. It and the rest of the Legion of Stationary were granted life by King Olly to serve as his minions in guarding the streamers, with the Hole Punch sent to guard the yellow streamer in the Scorching Sandpaper Desert. Hole Punch took over the Temple of Shrooms in the Scorching Sandpaper Desert and imprisoned the sun within a large disco ball so it could turn the temple into a nightclub. It also stole the faces of the Toads of the temple, forcing them to become its disco audience.

When Mario and Olivia reach the temple in the temple, Hole Punch and the end of the yellow streamer are behind a door at the back of a large disco room, with Hole Punch refusing to come out unless the music is changed, threatening to punch a hole in the DJ if he doesn't play music it likes. Mario must find records around the temple and bring them to the disk jockey to play for Hole Punch. If it does not please them, Hole Punch insults it and demands a different song. Only playing "Thrills at Night" impresses it, before it asks Mario to find an audience to join it on the dance floor.

Once Mario finds all Toads in the temple, they hit the dance floor, eventually getting the attention of Hole Punch, prompting it to burst out of its room and onto the dance floor, challenging Mario to a "face-off" as it does so. During the battle, Hole Punch punches four holes onto the ring closest to its space, including the ON button. Falling in one of the holes wastes one turn. Attacking the front of Hole Punch does no damage, meaning Mario must navigate his way to the monster's rubber back to deal damage. In retaliation, Hole Punch punches a hole in Mario with its hole punchers, removing a fourth of his max HP. Hole Punch also attacks by spitting out paper holes, which restore the missing parts of the rings and even Mario's punched out portion, restoring his health if collected.

After enough damage is taken, Hole Punch prepares a grand attack called "The Whole Punch" that deals a tremendous amount of damage to Mario. To protect himself, Mario must activate the Magic Circles and summon the Earth Vellumental, creating a high surface that protects Mario and causes Hole Punch to flip over when it charges at it. This leaves its base exposed, allowing Mario to deal massive amounts of damage to Hole Punch and ultimately finish it off. Upon its defeat, Hole Punch counts down to its body's explosion, causing it to release the punched out faces of the Toads, restoring them back to normal. Mario then destroys the yellow streamer, which also releases the sun from the disco ball and returns the desert to its regular state.

After Olivia's wish reverts her brother's actions, Hole Punch turns back into a regular hole puncher.

Hole Punch, as its name suggests, is a massive hole puncher, with a yellow handle and a black body. This black body has King Olly's face on the bottom. 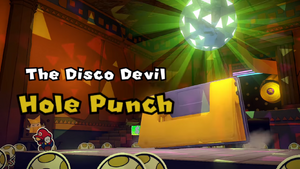 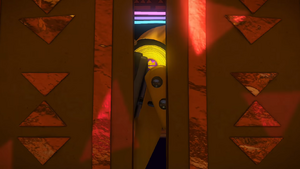 Hole Punch hiding behind the door to their room. 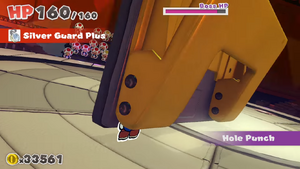 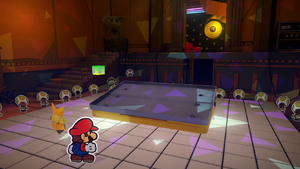 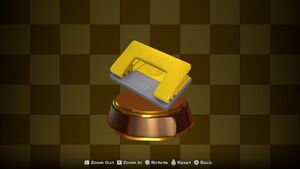 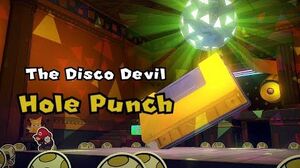 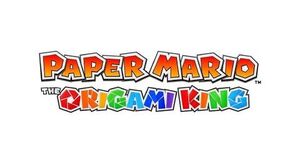