Vessel of the Infection

Seal the Infection within itself (briefly succeeded, later failed).

The Hollow Knight is the titular central antagonist and final boss of the 2017 indie game of the same name. They are the Vessel that sealed away the Infection, but at the cost of eventually becoming infected themself.

The Hollow Knight was one of the many mysterious life-forms called Vessels, created using Void at the bottom of the Abyss below Hallownest. When a higher being known as the Radiance plagued the dreams of the inhabitants of Hallownest, the Pale King, the ruler of the kingdom, came up with a plan to seal her away using the Void. He and his queen, the White Lady, created these vessels- their children- with the intention of sealing the essence of the Radiance inside them. These Vessels were required to have no mind or will of their own, as the Radiance had the ability to break minds and enslave wills. This meant that she could eventually escape from an impure Vessel. Only one vessel was shown to escape from the Abyss- the Pure Vessel. It was taken to the palace and was raised by its parents, the king and queen. However, this vessel was discovered to be impure, implied to be because of their parental bond with their father, the Pale King.

After sealing the Radiance within itself, the Hollow Knight was chained up inside the Temple of the Black Egg. The King asked three prominent bugs, the Dreamers, to form a seal on the outside of the Temple. This prevented anyone from entering the Temple, and it prevented the Hollow Knight from escaping its confinement. The Dreamers went into a permanent rest, and after some time, the King and the White Palace mysteriously vanished, leaving Hallownest struggling to survive on its own.

After the Knight absorbs all three of the Dreamers, the Temple of the Black Egg will be opened for the player to fight the Hollow Knight. If it has collected enough Essence, the player can use the Awoken Dream Nail to gain access to the White Palace. This will start the player on a quest to obtain the Void Heart, which will unlock two additional endings.

If the Knight has obtained the Void Heart, Hornet will aid the player by immobilizing the Hollow Knight long enough for the Knight to be able to Dream Nail the Hollow Knight and enter their mind. However, should the Knight not use the Nail in time or attack the Hollow Knight with any other attack, the Hollow Knight will break out of their stun and knock Hornet aside, continuing the battle until their death. Much like the regular ending, the Knight becomes the new Vessel, while Hornet becomes a Dreamer, forming a seal on the entrance to the Temple of the Black Egg. With Hornet trapped inside her own seal, there is no longer a way to stop the Infection if it ever comes back.

After defeating the Pure Vessel in the Pantheon of the Knight, a cutscene plays featuring the Knight, the Hollow Knight back in its original Vessel form, and several other Vessels in the background. The two Vessels stare at each other while the others silently watch before a light shines down from above, along with the Radiance's roar. The Vessels watch the light until a wave of Void emerges from the ground and engulfs the room and the Vessels.

In the new ending after defeating Absolute Radiance, the Void corrupts Godhome, and leaks out of the Godseeker to further corrupt Hallownest, unless the Delicate Flower has been given, which neutralizes the Void into one of its petals. Meanwhile, the Hollow Knight is now free from its duty of sealing away the Radiance, as she no longer exists. Still restrained by chains, it breaks free from the Black Egg and crawls towards Hornet, who readies her guard. It is left ambiguous whether or not it is now friend or foe.

The Hollow Knight is a tall figure with a black body and a white horned insectoid head with a dark green cloak. Like the rest of the Infected, their eyes shine a bright orange, and they have a crack in the center of their head where the Infection escaped from their body. As the Pure Vessel, the only significant difference is that their cloak is now colored gray, and their eyes no longer have the orange look of infection.

Not much is known about the Hollow Knight's personality, as the Vessels were made to carry no will of their own. It is said by the Hunter that the Pale King imposed sacrifices upon others, including the Hollow Knight. Whether or not they willingly sealed the Radiance within themself is unclear. After the Hollow Knight became controlled by the Radiance, they took a more feral and aggressive state. Unlike most under her control, they also show enough self-awareness to fight back, repeatedly attacking themself in their boss fight and refusing to fight at their full strength. However, it's possible that in their dilapidated state, they had no full strength left.

The Hollow Knight when they were a child.

The Hollow Knight during the Abyss cutscene and Path of Pain cutscene. 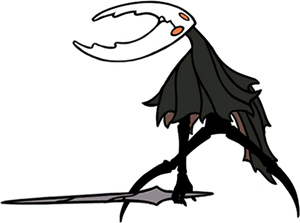 The Hollow Knight in chains. 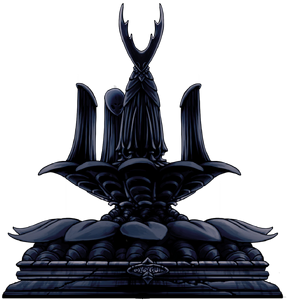 Memorial Fountain and statue to the Hollow Knight in the City of Tears, depicting them before they were sealed within the Temple of the Black Egg. 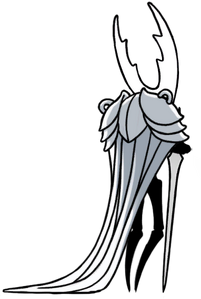 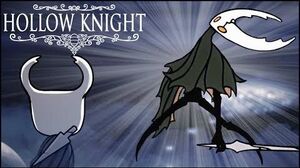 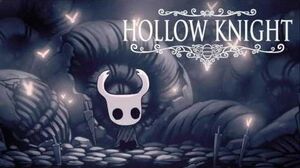